With Covid cases hitting record levels in China and people are protesting against the country’s zero-Covid rules, this has sent the US dollar higher amid haven flows. This has been reflected in commodity dollars going down along with indices, copper and oil prices. Are we about to see a more profound dollar recovery?

Before we discuss the macro factors in greater detail, let’s a have quick look at the daily chart of the Dollar Index: 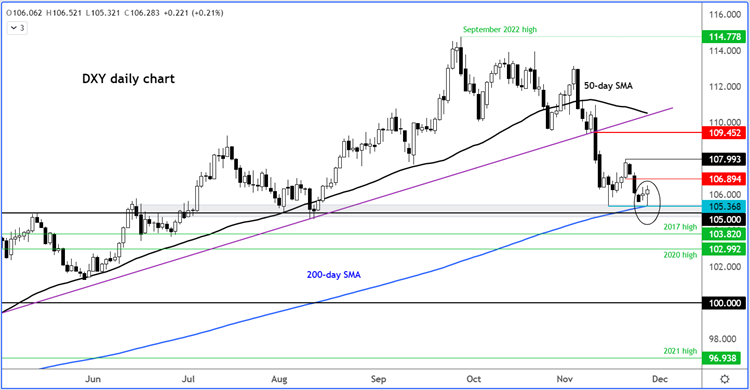 The DXY has certainly shown some signs of life around its 200-day average and support in the 1.0500-1.0540 area. But it is far too early to say whether this will turn into a full-on rally. However, it is a key support are and we are still inside a long-term bull trend. After the recent sell-off, the downside risks have now diminished in my view.

As well as the situation in China, investors will look ahead to a busy week for macro data, which will include the publications of US GDP and non-farm payrolls reports. Fed Chair Jerome Powell will also be speaking on Wednesday.

If Powell re-iterates the Fed's commitment to bringing inflation down through further rate rises and mentions that one or two inflation reports are not enough to suggest the Fed's job is done, then this could trigger a dollar recovery.

As mentioned, there will be lots of macro data to look forward to in the week ahead. US GDP is among those on Wednesday. The world’s largest economy grew at an annualized pace of 2.6% in Q3, beating forecasts of a 2.4% expansion and rising from two quarters of negative growth. Clearly, the US has been holding its own much better than some other regions in the world but faced with mounting evidence that the consumer is weakening amid hot inflation and interest rate hikes, the economy faces a bumpy road ahead.

The other big data release will be US non-farm payrolls report on Friday. While concerns over a potential recession are on the rise, the Fed has so far been reluctant to hit the brakes on rate hikes because of a healthy jobs market. The economy added a stronger-than-expected 261K jobs in October, which was well above forecasts and September’s numbers were revised higher. But if hiring slows down sharply then this could raise recession alarm bells, causing a re-think at the FOMC.

So, after a big drop, the Dollar Index will remain in focus. Investors will ponder whether they have sold the dollar too much in an overall still-positive macro backdrop for the greenback. The Fed is still tightening its policy and big macro risks remain elevated for Eurozone, China and elsewhere. A toxic mixture of still-very high inflation across the world and anaemic growth should keep the appetite for risk taking to a limit from here on.