EUR/JPY near multi-year lows ahead of ECB

EUR/JPY initially extended this week’s retreat on Wednesday ahead of Thursday’s highly anticipated European Central Bank (ECB) meeting and press conference. Early on Wednesday, the currency pair hit an intraday low just slightly above 123.00, which is not far off from late February’s new multi-year low near 122.00 support. These lows have not been seen since April of 2013.

The ECB is expected to announce additional monetary policy easing measures on Thursday, including further asset purchases and another negative deposit rate cut. These stimulus actions have long been awaited in the face of weak inflation and lagging economic growth.

In the event that these expectations are fulfilled as anticipated, EUR/JPY could break down to new lows, especially if the yen remains relatively strong and supported as it has since early February. Recent yen strength has been due in large part to global economic developments that have fostered a fairly persistent "risk-off" sentiment in the financial markets this year, despite the current rebound in equities.

In this scenario, EUR/JPY could likely fall below the noted 122.00 multi-year support level, confirming a continuation of the entrenched bearish trend, which could then target the next major support objective at the key 119.00 level.

In an opposite scenario, the ECB may potentially disappoint euro bears by easing less than expected, as what occurred back in early December of last year. On the day of that December press conference, EUR/JPY shot up by more than 400 pips to the 134.00-area before gradually paring those gains over subsequent weeks. If a disappointment occurs once again on Thursday, EUR/JPY could rise significantly off its lows, but should be faced by major resistance around the 126.00 level if such a rally develops. 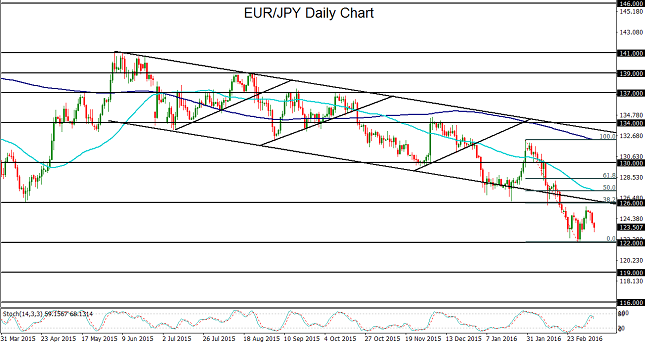