GBP/USD: What doesn’t kill you makes you stronger

The GBP/USD has been bombarded with a flurry of negative news throughout the week. First it was the Bank of England predicting 5 quarters of negative growth and double-digit inflation reading. Then it was the very strong US employment report, which rekindled fears about further large interest rate hikes from the Federal Reserve. However, from its peak near $1.23 to its low so far of $1.20, the cable has given up around 290 pips at its worst, which is not a lot. At time of writing, it was trading off its lows at 1.2060. Compared this price to the closing print from the previous week at 1.2170, the GBP/USD was just 100 pips worse off on the week – not a lot. What doesn’t kill you makes you stronger. Right?

What a strong US jobs report!

Let’s be honest. No one saw that coming. The US economy created way more jobs than expected with wages rising strongly. At the start of the week, the probability of another 75-basis point hike in September was about 25%, but this shot to about 70% after the jobs report was published. A straight-forward reaction in the markets followed: US dollar and bond yields jumped, gold slumped, and stocks fell, although later managed to rebound. Investors are already looking forward to the release of US CPI data in the week ahead. If after the strong jobs and wages growth we see an inflation print that is above forecasts, then this will cement expectations over a 75-basis point rate hike in September.

Let’s not jump into any conclusions.

First thing to note is that there are 47 days left until the next FOMC meeting. That means, we will have one more jobs report, two more CPI reports and plenty of other important data in between that could dramatically change the outlook by the time of the Fed rate setters’ September 21 meeting.

Secondly, inflation might have already come down more than expected in July. Economists think CPI rose +0.2% m/m, with the y/y reading expected to print +8.7%, down from June’s 9.1% print. There are reasons why inflation will slow. We saw the ISM PMI reports reveal sharp slowdown in prices paid sub-indices. Global supply chain pressures have eased. Shipping costs have fallen. Crude and other commodity prices have dropped. Consumers’ buying power have been squeezed, which should be disinflationary. Elon Musk has said the global economy has gone “past peak inflation,” with his electric car company’s commodity and component costs trending downward. Clearly, it will be some time before these changes filter through the economy and show up in data.

So, it could be that once the dust settles from this strong jobs report, we could see renewed weakness in US dollar and bond yields as forward-markets anticipate a sharper slowdown in the rate hikes, perhaps after the September meeting.

As mentioned, the fact that the GBP/USD has managed to hold its own relatively well despite all the negative news mentioned above is remarkable. It may be that the downside risks have been priced in, with the buyers happy to step in around the 1.20 handle again today. While it is possible that it may have already bottomed out, the cable needs to create a higher high to convince me. But I do think the downside is very limited from here as most of the downside risks have been priced in. 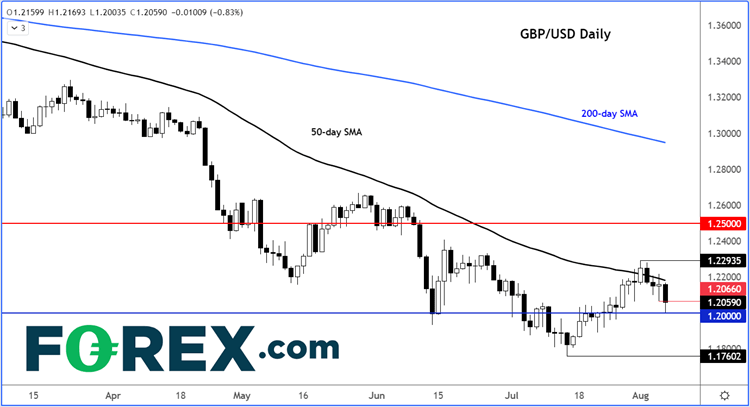 US CPI will undoubtedly be the most important macro release next week on Wednesday. As mentioned, signs that inflation is weakening is growing, with a number of key commodity prices falling. We have also seen the prices paid sub-indices of the ISM manufacturing and services PMIs tumble, suggesting we have hit peak inflation. Let’s see if annual inflation rate will decelerate from the 9.1% recorded in June, which was the highest since November of 1981.

Thanks to soaring prices of everything from gas to food, consumer sentiment in the US has been dropping rapidly in recent months, mirroring the situation in Europe and the rest of the world. However, the US economy has weathered the inflation storm better than other regions, which is why the dollar has been so strong. But is the momentum changing?

UK GDP barely grew in Q1 as output expanded by 0.8% compared to 1.0% expected. With several macro indicators suggesting the economy contracted in the second quarter, the pound fell below $1.20 handle before recovering as USD started to fall back. If GDP shows a positive print for Q2, the pound should react positively.