NFP preview: Will we see the lowest jobs reading since 2020?

In last month’s NFP preview report, we noted that the US jobs market was, “still producing a consistently solid number of new positions, with employers competing to offer compelling wages to attract talent. Against that backdrop, the Federal Reserve is committed to rapidly tightening monetary policy to ensure that inflation doesn’t become entrenched in a wage-price spiral higher.” While that dynamic is still at play to an extent, it’s worth noting that traders and economists are expecting a sizable slowdown in US employment growth: For the June NFP report, consensus expectations are for just 250K net new jobs and average hourly earnings projected to rise by 0.3% month-over-month: 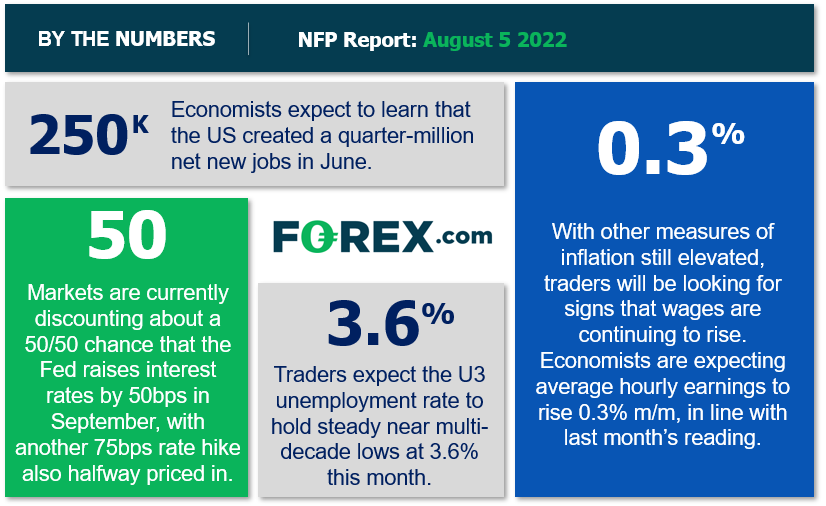 If the report meets these expectations, it would be the slowest net jobs growth since December 2020’s outright decline of -227k jobs.

As regular readers know, we focus on four historically reliable leading indicators to help handicap each month’s NFP report, but due to ADP’s decision to pause releasing its employment report while it revamps its methodology, we only have three leading indicators this month:

As a reminder, the state of the US labor market remains more uncertain and volatile than usual as it emerges from the unprecedented disruption of the COVID pandemic. That said, weighing the data and our internal models, the leading indicators point to a slightly below-expectations reading in this month’s NFP report, with headline job growth potentially coming in somewhere in the 150K-250K range, albeit with a bigger band of uncertainty than ever given the current global backdrop.

The US dollar index peaked near 109.00 midway through last month before pulling back to its 50-day EMA over the latter half of July. Earlier this week, the index put in a large bullish engulfing candle off that support level, signaling that the longer-term uptrend may be resuming. With rates finding support at a logical level and no longer overbought, our bias is tilted toward more strength in the greenback in the wake of the NFP report.

As for potential trade setups, readers may want to consider GBP/USD sell opportunities on a stronger-than-expected jobs report after the Bank of England’s forecast for an outright recession and 13% inflation at this week’s meeting. This week’s bearish reversal in the pair suggests that the longer-term downtrend has likely reasserted itself for a move back down below 1.2000.

On the other hand, a soft jobs report could present a sell opportunity in USD/JPY. The pair has shown a prolonged bearish divergence with its 14-day RSI indicator, showing waning buying pressure over the last few months, and prices finally appear to have broken below support at the 50-day EMA late last week.