US dollar maintains recovery ahead of Friday’s US GDP data

Significantly better-than-expected economic numbers from the US on Thursday have continued the recent string of positive US data that could help convince the Fed to raise interest rates in June or July. This data was followed up by relatively hawkish comments from a key FOMC member.

Unemployment claims for last week came in lower (better) than expected at 268K vs 275K expected, representing a further decrease from the prior three weeks. Durable goods orders for April increased at a much higher-than-expected 3.4% vs 0.3% expected, while the core durable goods number (excluding transportation) increased by a more modest 0.4% vs 0.3% expected. Finally, the increase in pending home sales for April reached a multi-year high at 5.1% vs 0.6% expected.

These positive data points were further underscored on Thursday by comments from Federal Reserve Governor and voting FOMC member, Jerome Powell, who reiterated recent hawkish comments from other Fed members. Powell stated that a rate hike would be appropriate "fairly soon," provided economic data continues to improve. This further vote of confidence in a potentially impending rate hike led to a modest rebound for the US dollar on Thursday, which had been falling significantly earlier in the day.

With the US markets focused on the Fed as of late, economic data has taken on even greater importance in the run-up to the next FOMC meeting in mid-June. In addition to next week’s Non-Farm Payrolls employment numbers, tomorrow’s Preliminary GDP (second release) will be critical in helping to fulfill (or not) the Fed’s criterion of improving economic data. The expectation for Friday’s GDP is an annualized 0.8%, but the results in several previous quarters have consistently exceeded expectations.

The Fed Funds futures markets as of Thursday are pricing-in more than a 30% probability of a June rate hike and over 50% for a rate hike by July, far surpassing the probabilities from a few weeks ago before April’s FOMC minutes were released.

From a technical perspective, the US dollar has spent the bulk of May in recovery mode and has continued to remain supported on increased anticipation of a summer Fed rate hike. In the case of USD/CHF, the currency pair has been rising sharply since its early May lows below 0.9500 support. That low was accentuated by a clear "hammer" candle pattern, which hinted at a potentially likely turn to the upside. During the course of the rise from that low, USD/CHF has broken out above major prior resistance levels, including, most recently, the 0.9800 level. From there, the currency pair rose further to break out above its key 200-day moving average. After the breakout, the past week has seen a tight consolidation just above that moving average in anticipation of upcoming data including Friday’s GDP and next week’s NFP employment numbers.

On any better-than-expected GDP number Friday morning, USD/CHF could be pushed up to parity (1.0000) and potentially higher from its current consolidation around 0.9900. Further upside resistance targets above parity reside at 1.0100 and then 1.0300. To the downside, any worse-than-expected GDP outcome could be seen as a rate hike deterrent. In that event, any return below the noted 0.9800 support/resistance level could potentially lead to a breakdown of the current recovery. 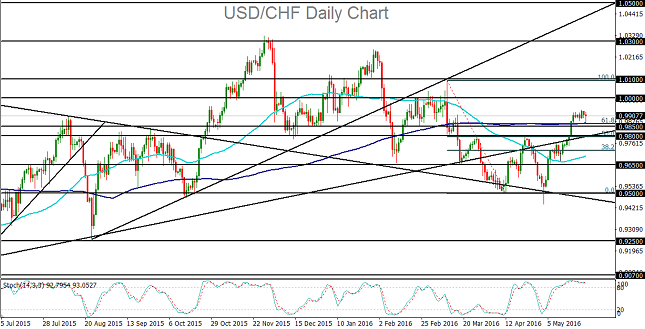