Tullow Oil 2021 preview: Where next for the Tullow Oil share price?

When will Tullow Oil report 2021 earnings?

Tullow Oil will publish its full year earnings for 2021 on the morning of Wednesday March 9.

Tullow Oil has already revealed that it produced 59,200 barrels of oil equivalent per day during 2021, marking a significant fall from the 74,900 barrels produced daily in 2020 and coming in way below the original 60,000 to 66,000 barrel guidance targeted by the company at the start of the year.

The Jubilee field saw working interest production decline 9.8% year-on-year to 26,600 barrels per day, but the fall was primarily driven by the 32% fall in output from the TEN field to just 15,500 barrels per day.

Tullow benefited from higher prices in 2021, when it earned an average of $63 per barrel compared to the $50.9 per barrel seen in 2020. However, this will not be enough to offset the dramatic fall in output, which should see revenue fall to around $1.3 billion from just under $1.4 billion the year before.

Analysts forecast that gross profit will rise to $591.9 million in 2021 from $403.0 million from 2020, and they are expecting Tullow to escape the red and swing to a $176.0 million profit after tax from the hefty $1.22 billion loss booked the year before. That is partly because of improved profitability, with Tullow having focused on reducing costs during the past two years.

Importantly, Tullow Oil’s current production guidance is based on its current stakes in both projects, with the company owning 35.48% of Jubilee and 47.125% of TEN. A current transaction is in progress that will, when completed, push up Tullow’s interest in Jubilee to 38.9% and in TEN to 54.8%. This will add another 5,000 barrels daily to Tullow’s working interest in 2022, suggesting the target for this year will be closer to 61,000 to 67,000 barrels per day this year once it is adjusted.

Tullow has already revealed that it generated around $700 million of underlying operating cashflow and $250 million of free cashflow in 2021. It ended the year with $2.1 billion of net debt, down from $2.4 billion a year earlier, and had $900 million of liquidity entering 2022.

Tullow Oil is currently prioritising reducing its debt pile in order to get net debt below 1.5x annual Ebitdax by 2025, from 2.6x at the end of June 2021. With leverage running high, analysts have flagged that its ambitions to find a new strategic partner to buy a part of its project in Kenya could be key in deleveraging the business. Tullow and its existing partners adjusted the plan for the project in 2021 which is now targeting higher peak production and lower costs in the hope it makes the opportunity more attractive to more potential partners.

The company has said it expects to deliver $750 million of operating cashflow and $100 million of free cashflow in 2022 based on an average price of $75 per barrel, although current prices suggest Tullow could beat this target if they remain elevated. Tullow has confirmed that its business will be self-funding at $65 per barrel in 2022 and has revealed that the average price achieved in January 2022 was $86.

Importantly, that free cashflow target already includes the $75 million payment from Total after a final investment decision was made for the Tilenga project in Uganda as well as the East African Crude Oil Pipeline, which triggered the contingent payout from the French oil giant that bought the project from Tullow back in 2020.

The reason cashflow may not improve in 2022 despite improved pricing is the ramp-up in spending on its core assets. It has set a capital expenditure budget of $350 million for 2022 compared to just $288 million the year before, with the vast majority to spent in Ghana. It said its primary focus is on developing infrastructure at Jubilee ‘that will lead to meaningful growth in production’ by bringing new parts of the project online ‘from 2023 onwards’.

Tullow is currently implementing a 10-year business plan outlined in 2020 which has the primary aim of improving cashflow by concentrating investment into its producing assets in West Africa and by developing earlier-stage projects in the likes of Kenya and South America in order to improve output and reserves.

Tullow Oil shares have risen sharply since oil prices started to climb higher in the days before the Russia-Ukraine conflict began and is currently trading at its highest level in over a month at 59.18p.

The latest uptrend has coincided with the 50-day sma crossing back above both longer-term moving averages, presenting a strong bullish signal that is reinforced by the bullish RSI and further supported by the fact average trading volumes have increased markedly over the past 10 sessions. Notably, the 10-day average volume at time is almost double the 100-day average.

The 50-day sma should be treated as the initial floor for the stock but the 100-day sma (which remains below the 200-day sma), which currently sits at 49p, has proven to be a more reliable level of resistance for shares since the start of 2022. The 2022-low of 47.6p comes into play should the stock slide below the 100-day sma floor. 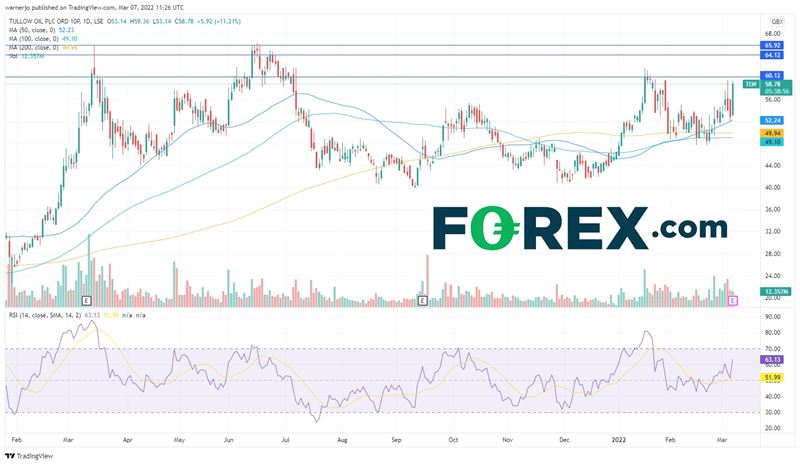 The 15 brokers covering Tullow Oil have mixed views on the stock but on average have a Hold rating and an average target price of 62p, implying there is over 6% potential upside from the current share price. Three brokers rate the stock as a Strong Buy, four at Buy, four at Hold, two at Sell and two at Strong Sell.

In early February, when Barclays said its view on European oil and gas companies had improved amid the rising price environment, the bank upgraded Tullow Oil to Overweight from Equal Weight, citing a ‘realignment of relative upside results’.

How to trade Tullow Oil shares

You can trade Tullow Oil shares with Forex.com in just four steps: