The Canadian dollar could be about to take a plunge. Not only did the Bank of Canada recently pour cold water on further rate hike prospects, but there is also the problem of crude oil.

The Canadian dollar could be about to take a plunge. Not only did the Bank of Canada recently pour cold water on further rate hike prospects, but there is also the problem of crude oil. The black stuff got sold off today in response to the latest US oil inventories data which showed a big rise in stocks of gasoline. But that’s not even half of the problem. The problem is actually in Canada itself, where crude oil is being sold at a significant discount to the rest of the world. Canada’s benchmark oil, called the Western Canada Select is trading at a $26.50 discount to WTI. That’s almost a 50% discount given the current price of WTI being about $62.50 per barrel. Canada has its oil production concentrated in Alberta and there are no pipelines to ship the oil to the cost. Consequently, nearly all its crude is piped to its only customer – the US – where it is refined into various oil products. But thanks to the shale oil revolution, the US is fast becoming self-sufficient in its energy needs. So it relies increasingly less on crude imports. As a result, a huge glut has been built up in Canada. This could prove very costly for the Canadian economy and therefore its currency.

AUD/CAD about to stage significant comeback?

Given the recent bounce in the AUD/USD from a long-term support around the 0.75 area, the Canadian dollar could fall faster against the Australian than the US dollar – assuming Thursday’s release of Aussie employment data will not be significantly lower than expectations. In fact, the AUD/CAD has already broken its most recent high after forming a false breakout reversal pattern around the January 2017 low of 0.9605 area last Wednesday. With a higher high in place, the path of least resistance for AUD/CAD is now to the upside. Consequently, I expect it to rise towards the next swing high at 0.9915 over the coming days – possibly a lot higher over time, if the oil problem for Canada persists. 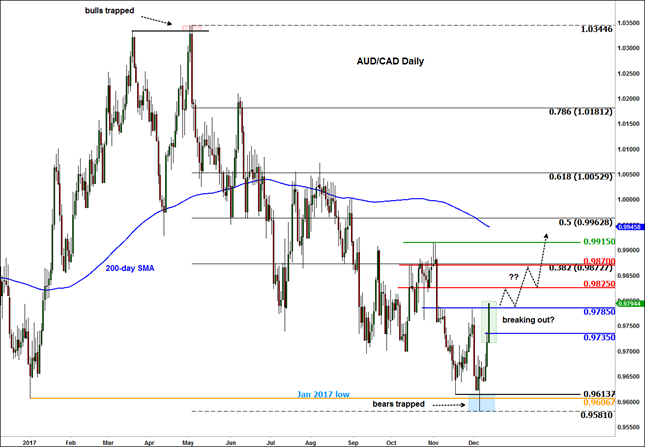