The longer-term technical outlook for the yellow metal is increasingly constructive...

Given global developments so far this year, traders have already gotten crash courses in diverse fields from climate science to Middle East relations to US constitutional law. This week has forced traders to get up to speed quickly in epidemiology.

The rapid spread (and equally rapid international response) to the coronavirus from its epicenter in China has left markets on edge, leading to general risk off sentiment. Market participants are drawing parallels to the 2003 SARS outbreak, which infected nearly 8,100 people worldwide and killed nearly 800. Economists estimate the SARS outbreak ultimately knocked 1-2% off China’s GDP and 2-3% off Hong Kong’s economic activity.

In my (completely unqualified) opinion, authorities are responding aggressively to limit the spread of coronavirus, and hopefully that will be enough to avoid a repeat of the SARS epidemic (or worse!). That said, traders are understandably selling risk assets first and asking questions later as today’s headlines point to another major Chinese city getting quarantined. The big wave of risk aversion has boosted the appeal of safe haven assets such as US treasury bonds (10-year yields down to a 1-month low at 1.74%), the Japanese yen (the day’s strongest major currency) and of course, gold, the planet’s ultimate safe haven.

While the spread of coronavirus (or lack thereof) will drive gold prices in the short term, the longer-term technical outlook for the yellow metal is increasingly constructive. Gold prices have spent the last two weeks consolidating in the mid-$1500s following the early January spike on the US-Iran military skirmishes: 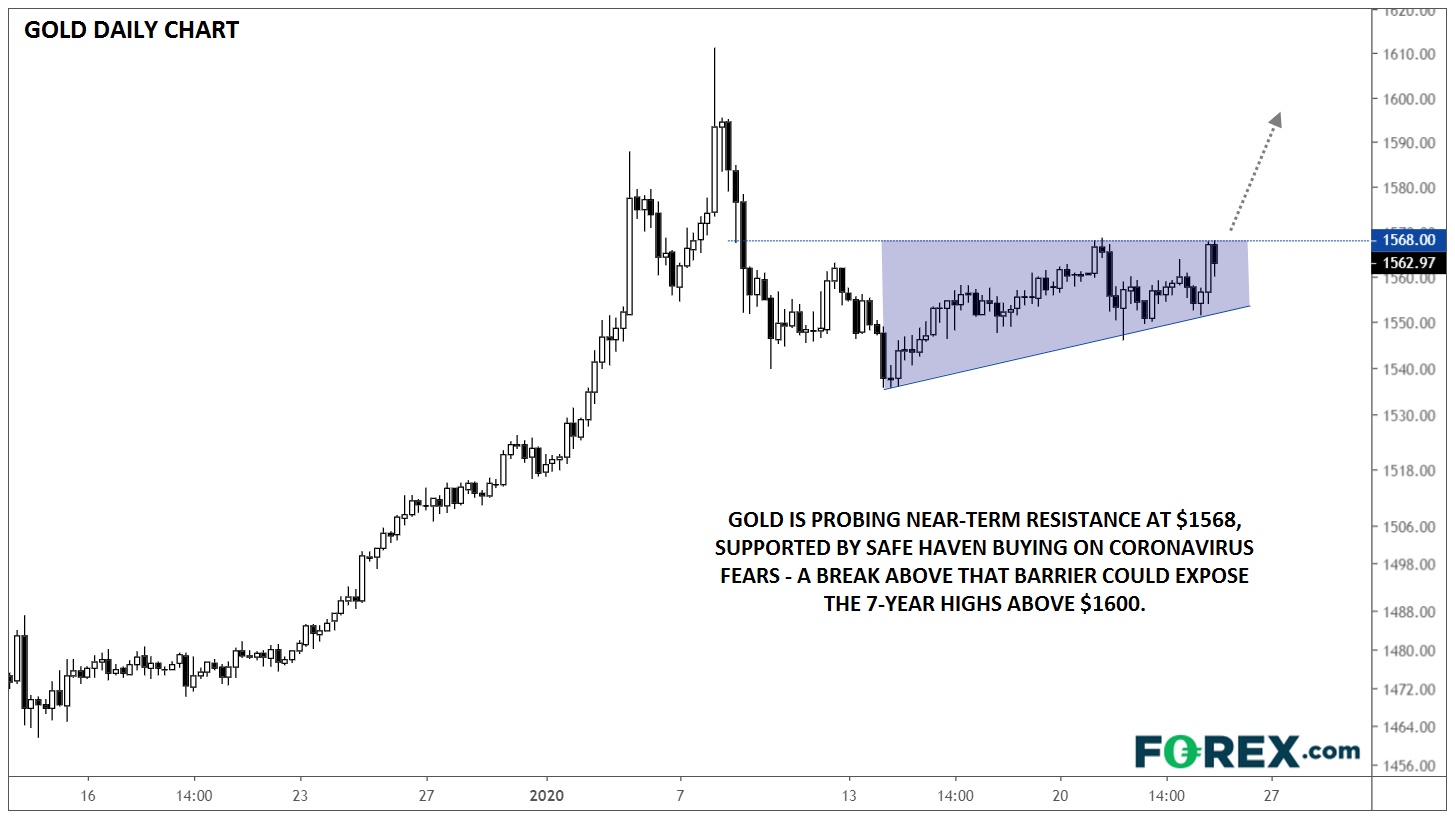 Gold’s longer-term trend remains clearly bullish, and prices may be forming an “ascending triangle” pattern with resistance around $1568 over the past week or two. A bullish breakout from this pattern, in-line with the underlying uptrend, could set the stage for a continuation to retest the 7-year highs near $1600. On the other hand, any signs that coronavirus is contained could serve as a near-term headwind for gold, though the medium-term uptrend remains intact as long as the yellow metal can hold above $1535.