Muted Reaction to US Data ahead of FOMC

Earlier today, we had ADP, Preliminary GDP, and Inflation data.

Today at 2:00pm EST, we will be the FOMC interest rate decision.  As discussed in our FOMC Preview, the market is almost fully pricing in a 25bps cut today.  Powell’s press conference will be the main act today.  However, ahead of the FOMC, this morning we had the ADP Non-Farm Employment Change for October, Preliminary GDP data for Q3, and Inflation data.

The headline number for ADP was slightly better than expected at 125K vs 120K expected.  However, with the revision lower in September’s data, from 135K to 93K, this was a worse number.  The Preliminary GDP headline number was stronger than expected at 1.9% vs 1.6% expected and 2.0% last.  However, the GDP Price Index (also known as the GDP Deflator), which is a measure of inflation, was 1.6% vs 1.9% expected and 2.6% last.  This number shows that inflation is slowing in the US compared to Q2.  In addition, PCE Prices (QoQ) were released.  This is one of the Fed’s favorite measures of inflation.  The Advanced Q3 number was 1.5% vs 2% expected and 2.4% last.  However, the Core PCE Prices number (ex- food and energy) was 2.2% vs 1.9% expected and 2.1% last.  In theory, these numbers show that inflation is meeting Fed expectations,  not including the more volatile food and energy prices.

USD/JPY tends to be highly sensitive to economic data releases.  Upon release of the data, the pair bounced a mere 15 pips and formed a shooting star candlestick on the 15-minute chart.   Short-term resistance at yesterday’s highs of 109.06.    Short term support at yesterday’s lows near 108.75. 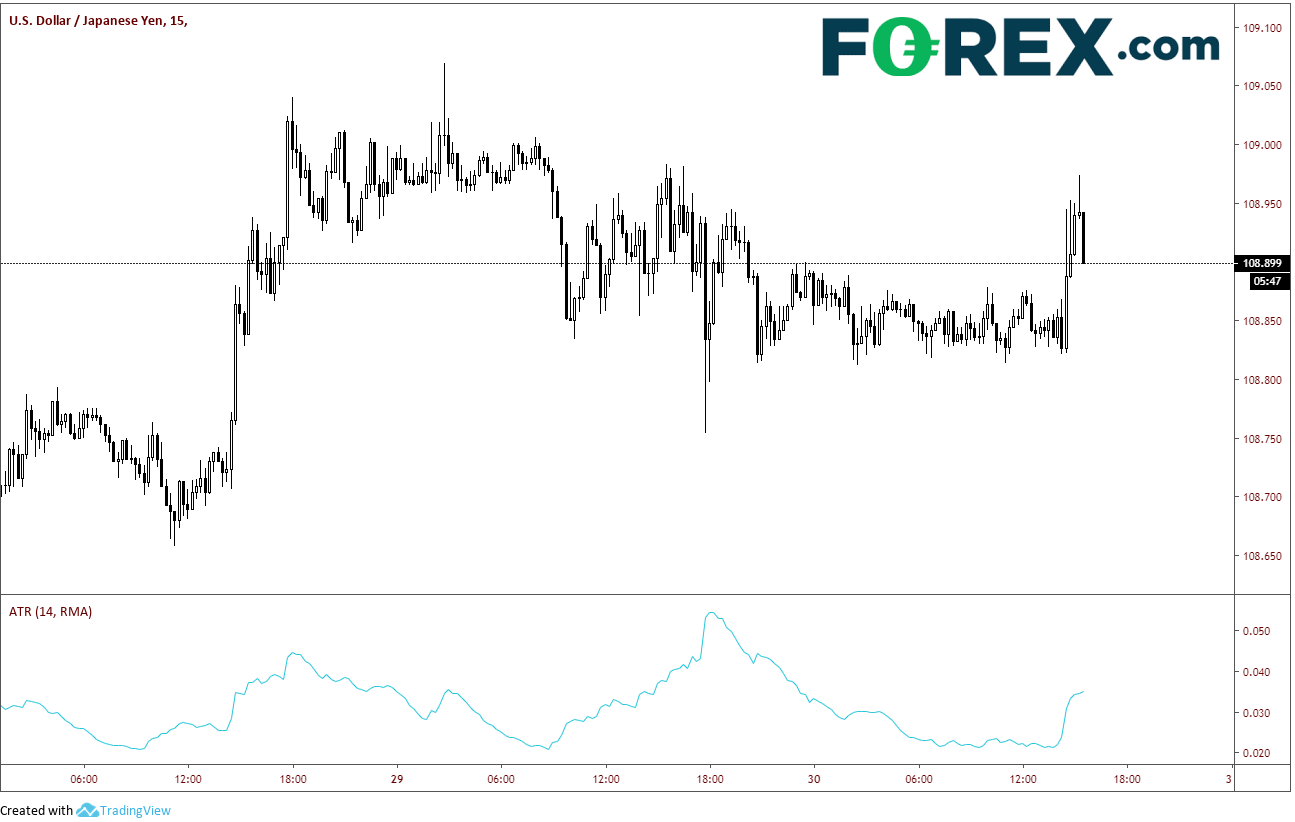 With the exception of the Canadian Dollar (as the BOC was more dovish than expected), barring any headlines from the usual suspects, the currency markets could remain muted until the FOMC meeting later this afternoon.  Keep an eye on the press conference at 2:30pm!