US Initial Claims – Is It Possible to be Higher than Last Week?

Regardless of the actual figure released, it will still be bad!

Last week, US Initial Claims were 3,283,000 vs an expectation of 1,500,000.  It was the largest initial claims weekly filing in US history and something I’d imagine no one ever thought they would see in their lifetime.  Later today, at 8:30am ET, the US will release Initial Claims for the Week ending March 28th. The expectation is for 3,500,000, with continuing claims expected to be 4,882,000!  If the figure comes in close to expectations, that would be a 2-week total of almost 6,800,000 filing for unemployment claims in the last 2 weeks!  As the country continues to shut down, state by state, these numbers are likely to continue at this rate for the next month.   President Trump said the earliest the US would “reopen” would be April 30th.

Yesterday, ADP released their Nonfarm Employment Change for March.  The figure was -27,000 vs an expectation of -150,000.  Tomorrow, the US releases Nonfarm Payroll data.  Expectations are for a change of -100,000 jobs.  The unemployment rate is expected to uptick from 3.5% to 3.8%.  The unemployment data overall is likely to get worse before it gets better.  However, as initial claims is the most up to date data released, it will also be the number most focused on.

All of this comes as President Trump recently said that the US expects 100,000 to 240,000 deaths from the coronavirus.  He stated yesterday that “we are going to have a couple weeks that will be horrific in coronavirus task force daily press briefings.”

Last Thursday, the day of the initial claims data release, the DXY sold off 1.5% from 100.26 to 99.46.  It has since been consolidating between 98.27 and just below horizontal resistance at 99.91.  This is also the area between the 38.2% and 61.8% retracement levels from the March 9th low to the March 20th highs.  If the initial claims data is weak, and the DXY sells off like it did last week, price could be down near 97.00 by the end of the day.  The targeted move out of the pennant formation is near 95, or almost a 100% retracement back to the March 9th lows.  If the initial claims data is better, price could break out to the upside and trade near horizontal resistance at 101. 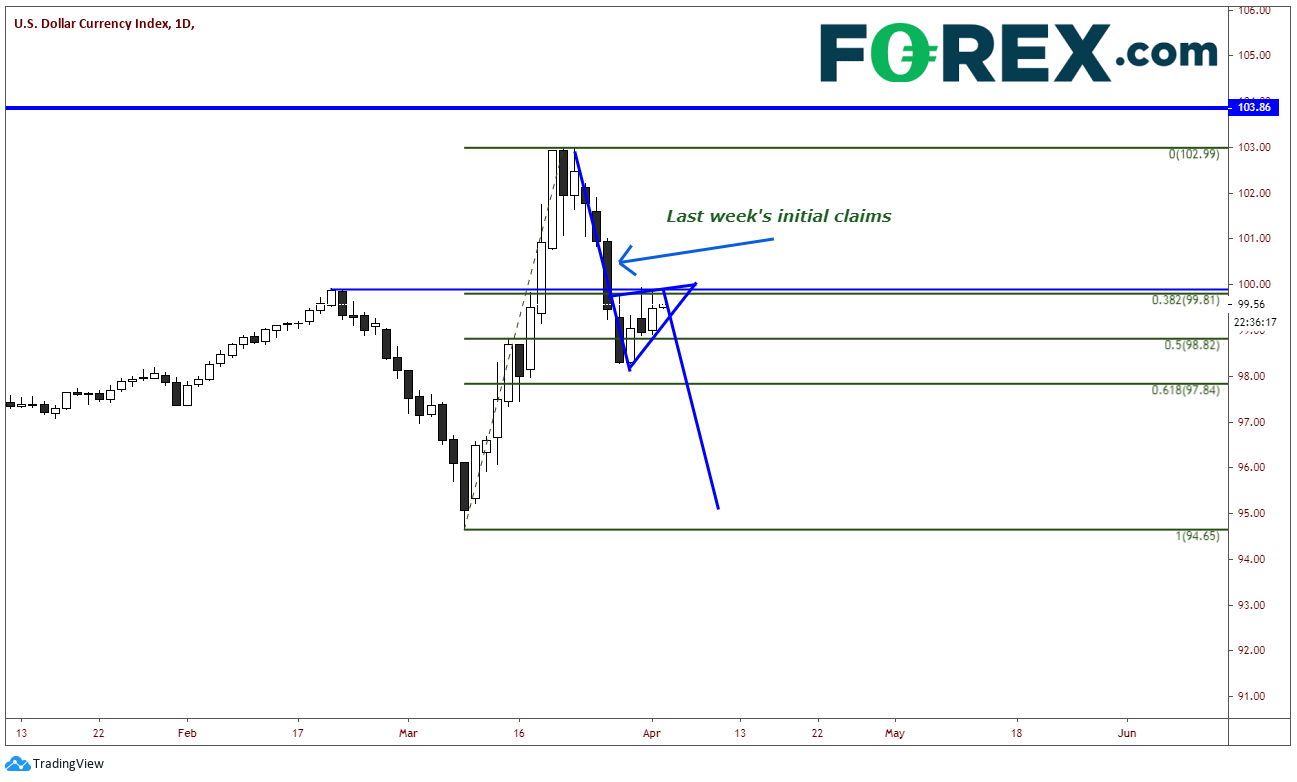 However regardless of the actual figure released, it will still be bad.  And as the President has recently expressed, things are likely to remain dire for at least the next few weeks.