US Stocks: Was Last Week the Bottom or Is This a Dead Cat Bounce?

Looking at the sector performance, breadth, and historic precedents we believe the odds favor a retest of the lows at minimum...

"...[T]he market does not turn when it sees light at the end of the tunnel. It turns when all looks black, but just a subtle shade less black than the day before."

Over the last couple weeks, we’ve repeatedly reminded traders that the stock market will bottom before the economy starts to improve, as it has during past bear markets. In fact, according to the National Bureau of Economic Research, the US economy was still in recession until June 2009, three months after the stock market formed its last major bottom on the exact day Grantham published his now iconic note, “Reinvesting When Terrified.”

Even with that historical perspective, we were caught off guard by the ferocity of the current rally in major US stock indices, which have tacked on nearly 22% from last Monday’s closing low and have managed to hold onto the gains so far this week.

…So was that the bottom for US stocks or are we merely in the midst of a torrid “dead cat bounce”?

Like every provocative forward-looking question we ask here, it’s impossible to know for certain, but looking at the sector performance, breadth, and historic precedents we believe the odds favor a retest of the lows at minimum.

While the broader markets have rallied sharply over the last week, the types of stocks leading the rally signal that investors remain highly skeptical of the surge. For the uninitiated, sector performance is a subset of technical analysis that involves evaluating what types of stocks are performing well to help predict how the overall stock market will perform moving forward. Historically, economically-sensitive sectors like technology, material, and consumer discretionary stocks tend to outperform the broader market in a healthy uptrend, while more stable, economically-insensitive sectors like utilities and REITs typically outperform when the market is at risk of a drop.

As the chart below shows, defensive sectors like utilities and real estate have led the market higher since the bottom on 23 March, while pro-growth sectors like communication services, consumer discretionary, and technology have lagged the broader market:

While sector leadership could certainly evolve (it’s only been a week after all!), the current sector profile suggests that investors remain nervous and that the broader market is potentially vulnerable to another leg lower.

At the end of the day, the stock market is …well… a market of stocks. In other words, broad stock market indices can only turn durably higher when most of the stocks within them also turn higher. There are a variety of ways to measure this so-called market “breadth,” but one simply way to look at the percentage of stocks that are trading above a given moving average as a proxy for the proportion of the index that’s in an uptrend. 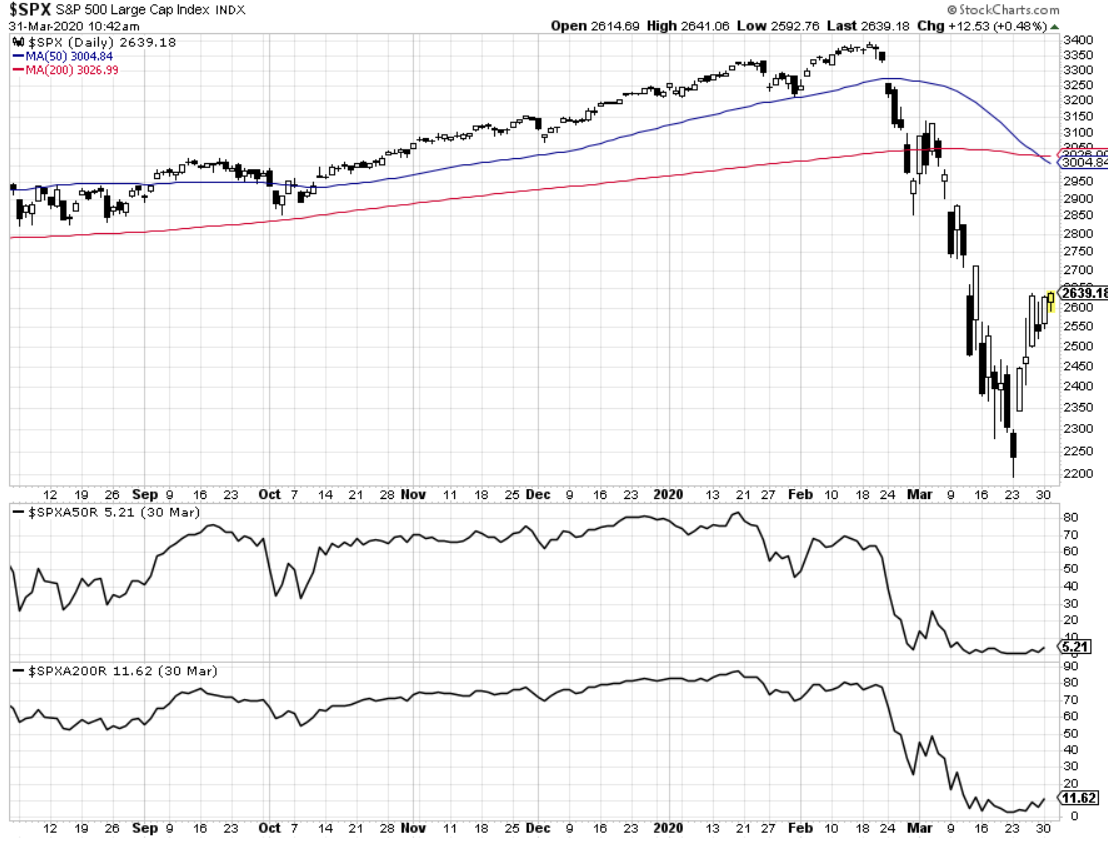 With just 5% of S&P 500 stocks in an “uptrend” relative to their 50-day averages and around 12% of stocks above their 200-day average price, it’s clear that most stocks remain in a downtrend despite the current rally. Until we start to see more stocks entering uptrends, traders may remain skeptical that a durable bottom has formed for US stocks. Coincidentally, we’ve just seen a “death cross” of the S&P 500’s 50- and 200-day moving averages, indicating that the long-term trend has turned lower, further adding to the accumulated bearish evidence.

We hesitate to even mention this style of analysis as many charlatans become enamored with (often the most extreme) historical analogs, but there is nonetheless value in comparing past market crashes to put the current market moves into context. At the risk of being alarmist, we’ve selected 1987 and 1929 as possible analogs, given the sharp market drops and subsequent bear market rallies.

Looking at the DJIA chart (which has a longer history than the S&P 500) below, both periods saw sharp drops of roughly 35% before rallying back nearly 20% before turning lower again to retest the low and establish a more durable bottom: 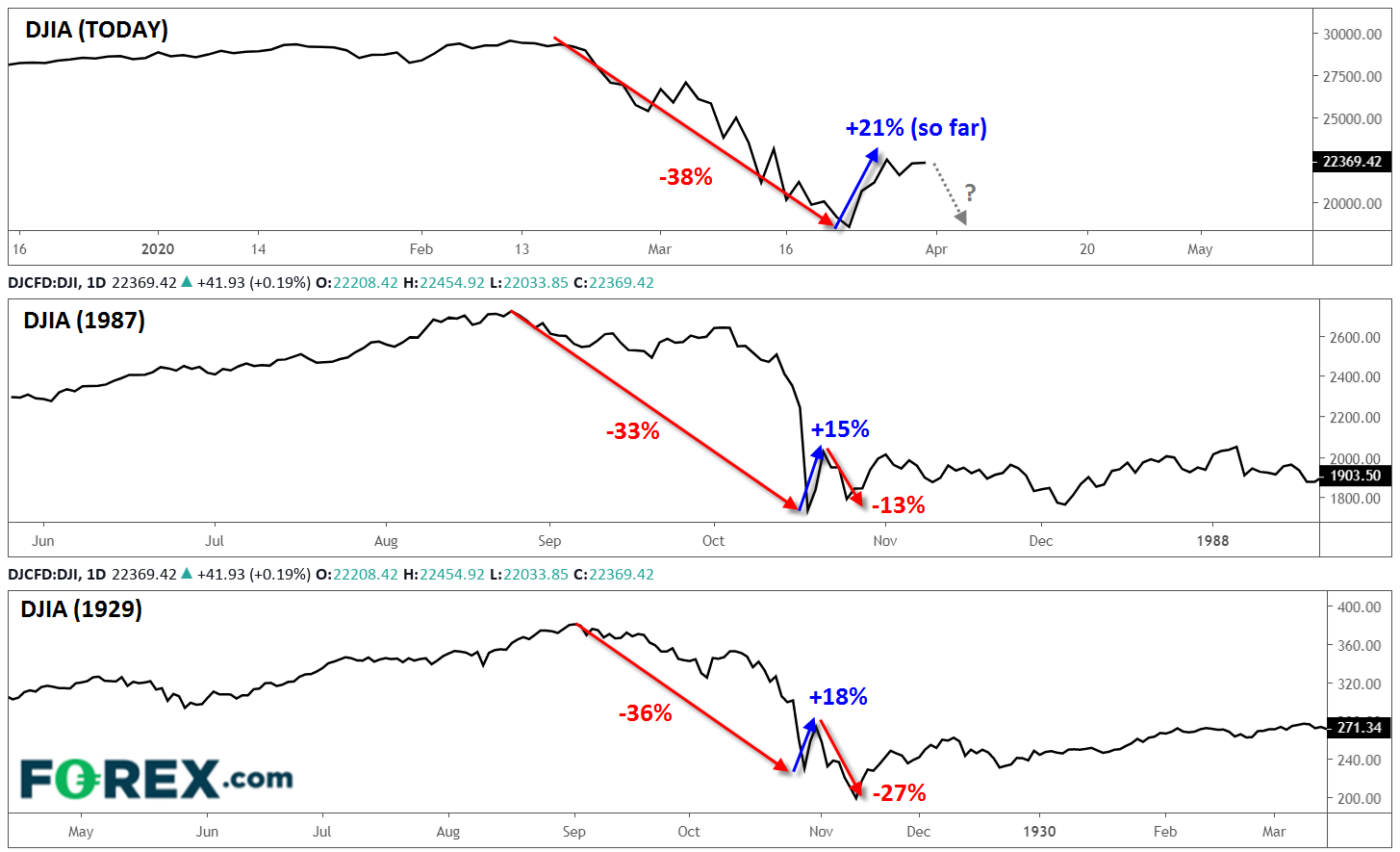 The potential parallels with today’s market following a -38% drop and +21% rally (so far) is notable. Whether stocks follow the rest of the “playbook” to retest last week’s low remains to be seen, but we have seen similar moves amidst past crashes.

To sum up, the ferocious market rally over the last week absolutely could mark a long-term bottom for US indices, but looking at the move from a sector, breadth, and historical analog perspective suggests that the odds favor at least a retest of last week’s trough, if not an outright new low, before the markets can form a new longer-term uptrend.