Forex correlation: how do currencies align with other assets?

Currencies rarely move in isolation. Thanks to forex correlation, lots of pairs are closely aligned – and some even move predictably with assets outside of FX too. Let’s examine how currency pair correlation affects your trading, and whether you can use it to your advantage.

What is currency correlation in forex trading?

In forex trading, currency correlation is a measure of how much the movements of FX pairs are affected by each other. However, it can also describe the extent to which a forex pair’s movement is aligned with other markets, such as commodities or stocks.

FX pairs tend to be highly aligned with each other, as many of them share a currency. EUR/USD and GBP/USD, for example, both contain the US dollar. If the US dollar surges in value, both might fall.

There are two types of correlation to watch out for when trading forex: negative and positive.

Let’s continue our EUR/USD example to illustrate how this works in principle. In the table below, you can see how Eurodollar’s price action aligns with GBP/USD and USD/JPY over different periods.

As you can see, EUR/USD and GBP/USD are generally highly positively aligned. USD/JPY, on the other hand, tends to move mostly in the opposite direction – as it should, due to USD being the base currency in the pair instead of the quote.

Notice anything else in the table? Correlation can change drastically over time, with USD/JPY swinging from positive to negative in the first two rows. As you trade the FX markets, it’s always important to remember that just because markets have been correlated in the past doesn’t necessarily mean they will be forever.

To calculate the correlation coefficient between two markets, you first need to work out both their covariance and their standard deviation. Then, you can input both into the following formula:

Get started with your City Index account today – or try out trading with a free trading demo.

What are the most correlated FX pairs?

The most correlated forex pairs tend to be those that not only share a currency, but also have close economic ties between the other currencies within the pair. This means that economic data and headlines will tend to affect each market in a similar way.

We’ve already encountered two FX markets that fit these criteria: EUR/USD and GBP/USD. As we saw in the table above, Eurodollar and cable tend to see very high levels of correlation. Why? Because not only do they both feature USD as the quote currency, but the UK and EU have a close economic relationship. 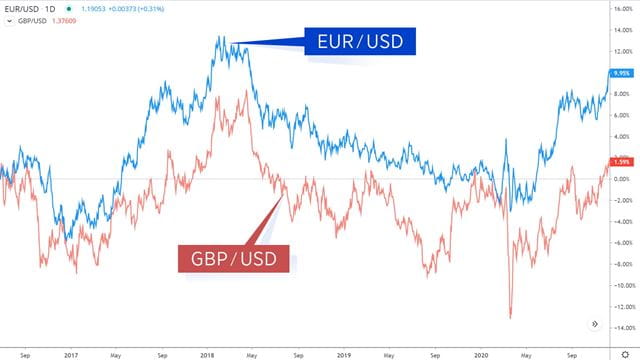 Here, the inverse relation is much clearer, with USD/CHF seeing a perfect negative correlation with EUR/USD due to the close ties between the European Union and Switzerland.

How to trade currency correlations

Or if you don’t feel ready to commit real capital just yet, you can open a FOREX.com demo instead. These come with virtual funds so you can find and trade correlated markets with zero risk.

Currencies aren’t only correlated with each other, though. They can also align with other asset classes entirely: and most often, they do so with commodities. This occurs through ‘commodity currencies’ – which are tied to regions dependent on a particular raw material for their economic growth.

Canada, for example, is a major exporter of oil. When oil prices are high, Canada makes a lot of profit from its exports, and its economy booms – which will usually play out across CAD. This results in a strong inverse relationship between oil prices and USD/CAD.

The US dollar and gold

USD, meanwhile, has a strong inverse relationship to gold, but not because the US economy is dependent on exporting the precious metal. Instead, XAU and the US dollar move against each other because gold is priced in USD.

You can see this relationship playing out in the chart below, which compares XAU/USD against the dollar index: 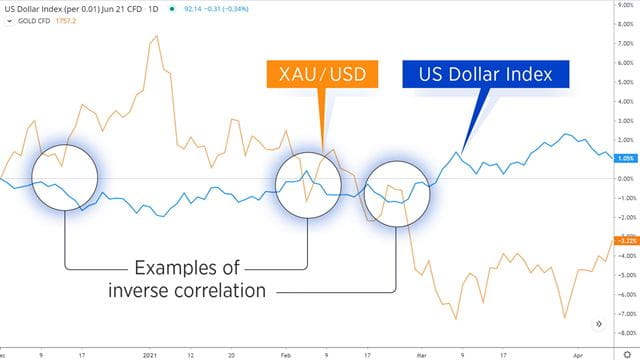 It isn’t just gold, either. Most commodities are priced in dollars, so will have some form of inverse relationship with USD.

Currencies can also be related to the stock market, but the relationships can be complex and play out in different ways depending on the stock you’re looking at. There are, however, some clearly correlated markets to be found.

Pound sterling, for example, often sees a strong negative correlation to the FTSE 100. This arises because most of the companies on the FTSE – such as GlaxoSmithKline, HSBC and Shell – have a strong international outlook. When GBP is weak, this increases their bottom line because exports in foreign currency are worth more. We saw this relationship play out after the 2016 Brexit vote, when the pound dropped to new lows and the FTSE 100 rallied. The more domestically focused FTSE 250, on the hand, sunk.

A similar relationship plays out between USD and US stocks. If a company makes most of its revenue overseas, then a strong US dollar is bad for business – which is why central banks sometimes step in when currencies run too hot. Companies that focus mostly on the US, however, will often struggle due to the slowing economy that often accompanies a weak US dollar.

When trading the relationship between FX and stocks, then, the key is to take everything on a case-by-case basis. Research the companies you’re considering trading and evaluate how their business might be affected by fluctuating exchange rates.

Why is forex correlation important to traders?

There are several ways you can use correlated markets in your trading strategy. The most common, though, is to avoid markets with strong relationships when you’re attempting to diversify your portfolio.

If you have open positions in the same direction on two highly correlated markets, then a loss in one will probably see you lose in the other one too, doubling your risk. So many traders try to stick to markets that have little relationship with one another.