Gold outlook 2022: Will precious metals get back on track after a lacklustre 2021?

As we write this in early December, gold has traded in an intraday range of $281 so far in 2021, with the high at the start of the year, touching $1,959 on 6th January and dropping to $1,677 at end-March.  Since then it has oscillated in a more or less horizontal trend and is arguably moving into a triangle formation that currently would reach its apex next April, at around $1,835.  Anything can happen between now and then, of course as the world continues to cope with virus variants, economic recovery has to be managed with care and sensitivity and the evolution of monetary policy continues to take centre stage.

See our guide on how to start gold trading!

Silver took a slightly different path, as a combination of the uncertain economic outlook and gold’s general meandering meant that silver underperformed and the correlation between the two slipped markedly in the first quarter, recovered and then fractured again towards year-end.  Silver posted its intraday high of $30.10 on the 1st of February, and the low for the year to date was $21.42 at the end of September.

See our guide on how to start silver trading!

Spot gold, silver and their correlation 2021 to mid-December: 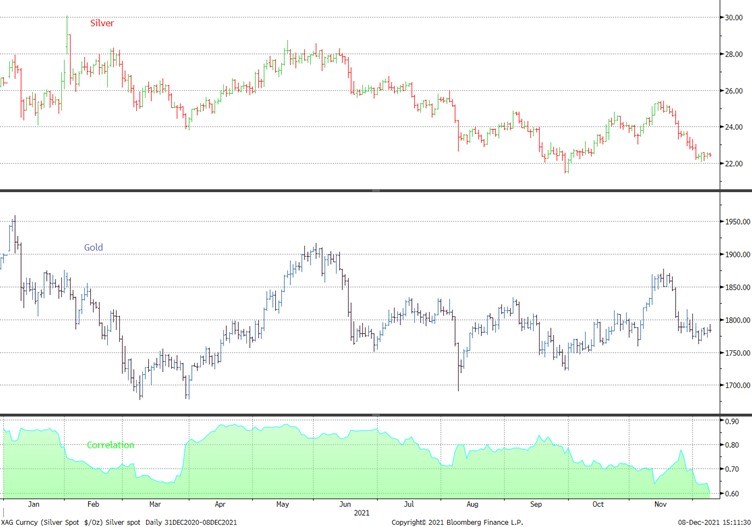 So what is the outlook for gold for 2022 and, by association, the prospects for silver?

We need to look at the key influences and assess how they balance out – are we looking bullish or bearish?

Our view is that gold should indeed get back on track next year as risk hedging will remain key. Once rate hikes get underway it is possible that investment will unwind to a degree, but on balance it looks as if weak-handed holders are out of the market, the “known unknowns” are well-rehearsed and any “unknown unknowns” are likely to be supportive.  The downside risk would be a cyclical shift such as the one we saw in 2013 when the ETFs shed almost 900 tonnes (all of which went into private hands in China), which would derail the market, but the excess liquidity in the system suggests that this is unlikely.  Real interest rates will remain negative even if inflation does prove to be transitory and this wipes out the opportunity cost of holding physical metals.

Gold and the inverse of the dollar, 2021 to mid-December: 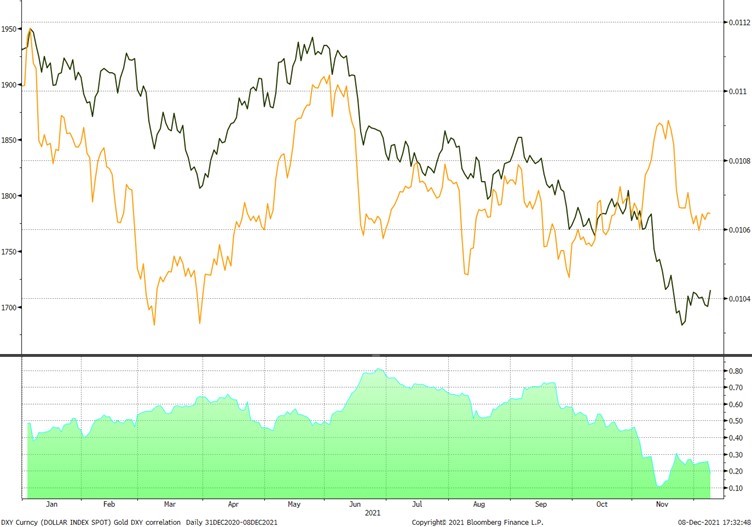 The Fed: Supportive if not outright bullish

The Fed’s monetary policy kept the markets transfixed over 2021 and will do so again during 2022.  The virus has of course been a key, and the arrival of the Omicron variant extends the uncertainty.  As we write there is a variety of views as to how many interest rate hikes there will be during 2022 with anything from March to September as the likely first date.  Jay Powell’s hawkish shift as he enters his second term at the helm took the markets by surprise and gold fell in line with other asset classes when he “retired” the thought of transitory inflation, but by nowhere near as much as some, and it recovered more quickly than most also, just as it did when the markets went into meltdown in March 2020.  It is also important to remember that a modicum of inflation is an important lubricant for an economy, especially when it is in recovery mode, as it should encourage spending.

That said the Fed will be looking to raise the fed funds target rate, but these increases won’t be anywhere near enough to take real rates into positive territory and this is also gold-friendly.

Looking around the world, it is arguable that emerging market currencies are undervalued, especially as some bond markets are now offering moderately attractive yields.  This could also work against the dollar, especially as the debt ceiling is to be raised again and the U.S. Government carries on borrowing.  Expectations of global inflation could become self-fulfilling as investors move into commodities, which would also help emerging currencies.  Meanwhile the over-valuation of U.S. equities is still a worry (as it has been for several years) and any rerating in those markets would ultimately benefit gold as investors continue to hedge risk.  In the short term, any equities breakdown would take gold lower in the rush for liquidity, but positions are almost invariably re-established after such a move.

The same can be said for the official sector, where over 400t of gold have been taken in during 2021 (compare with global annual mine production of roughly 3,600t) and a similar pattern is expected in 2022 as countries look to hedge their dollar risk and continue to diversify their holdings.

And finally, the physical markets, especially in India, China and parts of south-east Asia, still have substantial pent-up physical demand.  The shortfall in world jewellery demand during the first three quarters of each of 2020 and 2019, for example, against the average for the previous four years (first nine months) means that if the market were to get back to normal rates in 2022, jewellery demand would have to rise by 33% over the first nine months of the year.  In fact higher prices meant that expenditure of the contained gold actually increased by 35% in the first nine months of 2021 against the equivalent period in 2016-2019, so the potential upside is perhaps not as strong as the tonnage figures would imply when taken in isolation.

Gold and silver outlook: Supportive but not outright bullish

On balance, therefore, there are sufficient tailwinds in the global economy and the possibility of further geopolitical tensions to give gold support, but not necessarily drive prices higher.  The key will be the dollar’s trajectory, not just because gold is a counterweight to the dollar but because it, too, is a measure of confidence.  So if, as we expect, the dollar’s mighty run draws to a close, gold should regain the $1,900 level with little problem and quite possibly further.  As for silver, while gold moves sideways silver is likely to underperform; when gold establishes an upward trend silver will accelerate past it.  But silver is notoriously volatile and not, at all, for the faint-hearted.  If you can live with the volatility, take a view and then leave it alone. Tinkering in the silver market carries a hefty wealth warning!

This piece is a guest contribution to our 2022 Market Outlook from Rhona O’Connell, Head of Market Analysis for EMEA and Asia at StoneX Group. Please visit the StoneX Market Intelligence portal and consider subscribing for more of Rhona and team’s research.