GameStop Q4 preview: Where next for GME stock?

When will GameStop release Q4 2021 earnings?

GameStop is scheduled to release fourth quarter and full year results after the markets close on Thursday March 17. A conference call will follow at 1700 ET.

GameStop’s new management that took over last year has refrained from making big promises and kept quiet on its plans for the company while addressing the problems within the business and growing sales. Ryan Cohen, the co-founder of online pet food store Chewy who recently took a 10% stake in Bed Bath & Beyond, has been leading the turnaround and hired a number of executives that previously worked for Amazon, including CEO Matthew Furlong and COO Mike Recupero.

That is fitting considering they are aiming to turn the company from a languishing bricks-and-mortar retailer into the Amazon of the video game industry by taking the business online and positioning it for the digital age by investing in new initiatives from Non-Fungible Tokens (NFTs) to cryptocurrencies.

One of management’s initial moves included building supplies, with inventory levels at the end of September having sat around one-third higher than the year before. Supply chain problems have now spread to virtually every industry, but investors will be hoping the investment in inventories will help it navigate the tough environment and mean it was well-stocked during the busy holiday shopping season in the fourth quarter.

That is part of GameStop’s primary focus to offer a ‘vast product selection, competitive pricing and fast shipping’ – all of which will be more difficult in the current environment plagued by not only supply chain problems but logistical disruption and surging inflation.

Notably, sales growth during the first nine months of 2021 was predominantly driven by hardware, which is more prone to supply disruption than software, which saw sales decline in the period. Hardware still accounts for over half of GameStop’s revenue while higher-margin software contributes one-third, with the rest coming from the sale of collectibles such as figurines.

Growing hardware demand is the result of the latest generation of consoles released by Microsoft’s Xbox and Sony’s PlayStation. Although the pair’s consoles were released some time ago, with the Xbox Series X and the PlayStation 5 both being launched back in 2020, demand has outstripped supplies and the number of games available that are designed for both new consoles is only just starting to ramp-up. Nintendo’s product lines, including the Switch console, have also contributed to GameStop’s sales growth and the company has expanded its relationships with other major tech brands such as Samsung, LG, Razer and Vizio.

GameStop ended September with $1.4 billion in cash and no material debt, which has also allowed it to secure access a new credit facility on more favourable terms should it need it. However, it continues to burn through cash after reporting an operating cash outflow of $324.0 million during the first nine months of 2021 due to the investment in inventory.

Investors can expect another brief update when results are released this week. Management have not taken questions from shareholders during the conference calls so far and are unlikely to start this week. Reggie-Fils Aime, the former president of Nintendo's North American operations who was COO of GameStop for about a year until leaving soon after Cohen took charge, told Bloomberg this week that management hasn’t articulated its strategy over fears that competitors will poach their ideas and raised eyebrows at the fact they haven’t communicated their plans to investors and other stakeholders.

Where next for GME stock?

GameStop shares have struggled to find higher ground since late last year and have gradually drifted lower to trade at $89 today.

The stock has hit a floor of around $86/$87 three times since late January and this is a key level that has to hold considering there is no telling how low the stock could go if it breaks below here, with the next level of support seen soon after the trading frenzy in early 2021 suggesting shares could fall below $40. The fact the 50-day sma continues to drift further below both the 100-day and 200-day smas and the RSI remains in bearish territory suggests the stock could remain under pressure going forward.

However, trading volumes have continued to decline over the past month and remain below the 100-day average and that, combined with the fact the current floor is holding, suggests the downtrend is running out of steam. The 50-day sma, which currently sits at $115, has proven to be a ceiling since the start of December and is the first upside target that needs to be recaptured before it can eye the February-high of $133. 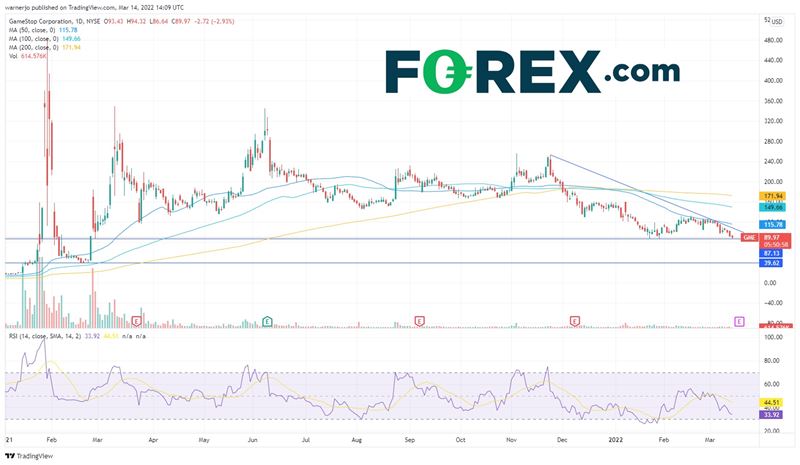 How to trade GameStop stock

You can trade GameStop shares with Forex.com in just four steps: