NIO Q1 earnings preview: Where next for NIO stock?

When will NIO report Q1 earnings?

Management plan to hold a conference call with investors at 0800 US Eastern Time (2000 in Beijing, Hong Kong and Singapore).

NIO is expected to report total revenue of RMB9,804 million in the first quarter of 2022, up from RMB7,982 million the year before.

The loss per American Depository Share (ADS) is forecast to come in at RMB0.86, which would mark a significant improvement from the RMB3.14 loss booked in the previous year.

We already know that NIO delivered 25,768 vehicles in the first quarter of 2022, up 28.5% from the year before. Although output has continued to grow, production has proven volatile this year. This has been the result of several issues, spanning from supply chain headwinds to the Covid-19 lockdowns introduced across China from March.

With China now easing Covid-19 restrictions, the key question is how quickly NIO can step-up output. NIO has said it expects production to start climbing again from June and said this is being supported by ‘strong order inflow’. Demand for NIO’s premium cars is expected to hold up better compared to cheaper mass-market models going forward as more affluent customers should prove resilient to the cost-of-living crisis and any new potential economic headwinds that surface this year.

The rebound from the trough seen in April will have installed some confidence that NIO is over the worst of the disruption, although supply chain headwinds that were exacerbated by lockdowns could take time to unwind and improve.

With this in mind, the second quarter may remain fairly muted before things really start to pick up again in the second half of this year. Wall Street currently believes NIO will deliver 28,220 vehicles in the second quarter, marking mild sequential growth, but believe it can shift 39,290 cars in the third quarter and then hit 61,900 in the fourth. If achieved, that puts NIO on course to deliver 152,179 cars in 2022, which would be up some 66% from the 91,429 shifted during 2021.

Notably, in March, NIO started delivering its fourth model – the flagship ET7 premium smart electric sedan. Having sold just 163 of them in March, deliveries of the ET7 rose to 693 in April and 1,707 in May. It plans to launch further models this year. The ET5 mid-sized smart electric sedan will be built at its new manufacturing plant at NeoPark in Hefei, and should start rolling-off the production line in September, while the ES7 will also make its debut this year. It also plans to launch new versions of its existing SUVs – the ES8, ES6 and EC6 – equipped with its new digital cockpit hardware.

Meanwhile, margins should also be closely-watched. The entire market has been grappling with rising costs amid the supply chain disruption that has plagued the automotive industry. For NIO, this is expected to see its gross margin tighten to just 16.45% in the first quarter from 17.1% in the previous quarter and from the 19.5% margin seen the year before.

However, price hikes, improved supply chains and better scale as production ramps back up should start to make an impact in the second half, which should allow its gross margin to recover back toward 18% to 20% in the latter half of 2022, according to consensus figures. The fact the new ET7 is higher-priced than other models will also help boost average selling prices this year and the refreshed models of the existing suite of cars could also yield higher prices.

The situation in China twinned with global supply problems is likely to remain the biggest concern over the coming months, but markets are confident that things can improve in the second half and get the company back on track. That makes NIO a potential recovery play going forward, although the launch of new models, its expansion into Europe and a significant increase in R&D spend means NIO is not anticipating reporting its first profit until 2024.

NIO shares have lost over 42% in value since the start of 2022 alone as the tough environment has weighed on production and margins, and the company has seen its value collapse some 69% since peaking at all-time highs back in early 2021.

It is worth noting that the inability of the US and China to find a mutually agreeable way to audit companies is another factor that has weighed on NIO. The US is not satisfied about the auditors used by NIO and some other Chinese firms as they cannot inspect them, and this resulted in NIO being among a group of stocks to be added to the SEC’s list of companies that could be forced to delist from American exchanges. Notably, the threat of having to delist was one of the reasons why NIO listed its shares in Hong Kong back in March and in Singapore in May, although its primary listing remains on the New York Stock Exchange.

NIO shares hit a 22-month low last month but have since rebounded to trade at their highest level in over six weeks.

The stock has struggled to remain above the 50-day moving average for too long over the past six months but managed to recapture this key level last week. The indicator, which currently sits at $17.82, should now be treated as the initial floor for the stock. We could see the stock swiftly fall back below $14 should if fail to hold, and then to the $13.50 floor seen in March and then the 22-month low comes back onto the radar.

If the 50-day sma can hold and the stock can climb higher, as suggested by the bullish RSI and reinforced by an uptick in average trading volumes over the past five days, then the stock could recover back above the 100-day moving average at $20 before the April-high of $24 comes back into the crosshairs. From there, it can look to return back above $26 and then the 200-day moving average at over $28. 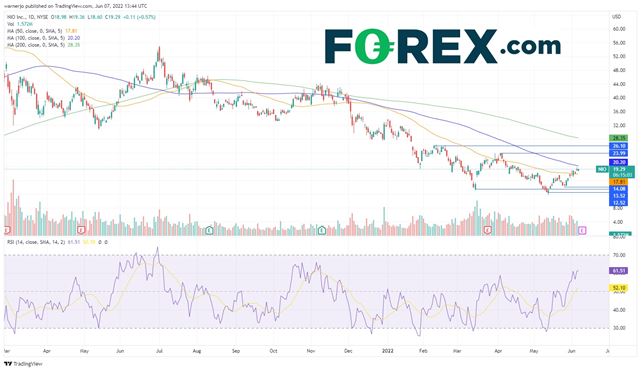 How to trade NIO stock