It was March 2020, and the dawn of a catastrophic period for the oil industry. The global coronavirus pandemic and the Saudi-Russia price war joined forces to cause a price collapse of unprecedented magnitude. Events led to US oil prices turning negative in April as global demand dried up amid a production glut and limited storage capacity.

But once the smoke cleared, demand recovered and the price resurgence took hold, what did the list of the world’s biggest oil producers look like, and how are global supply patterns likely to play out from here? Read on to find out. 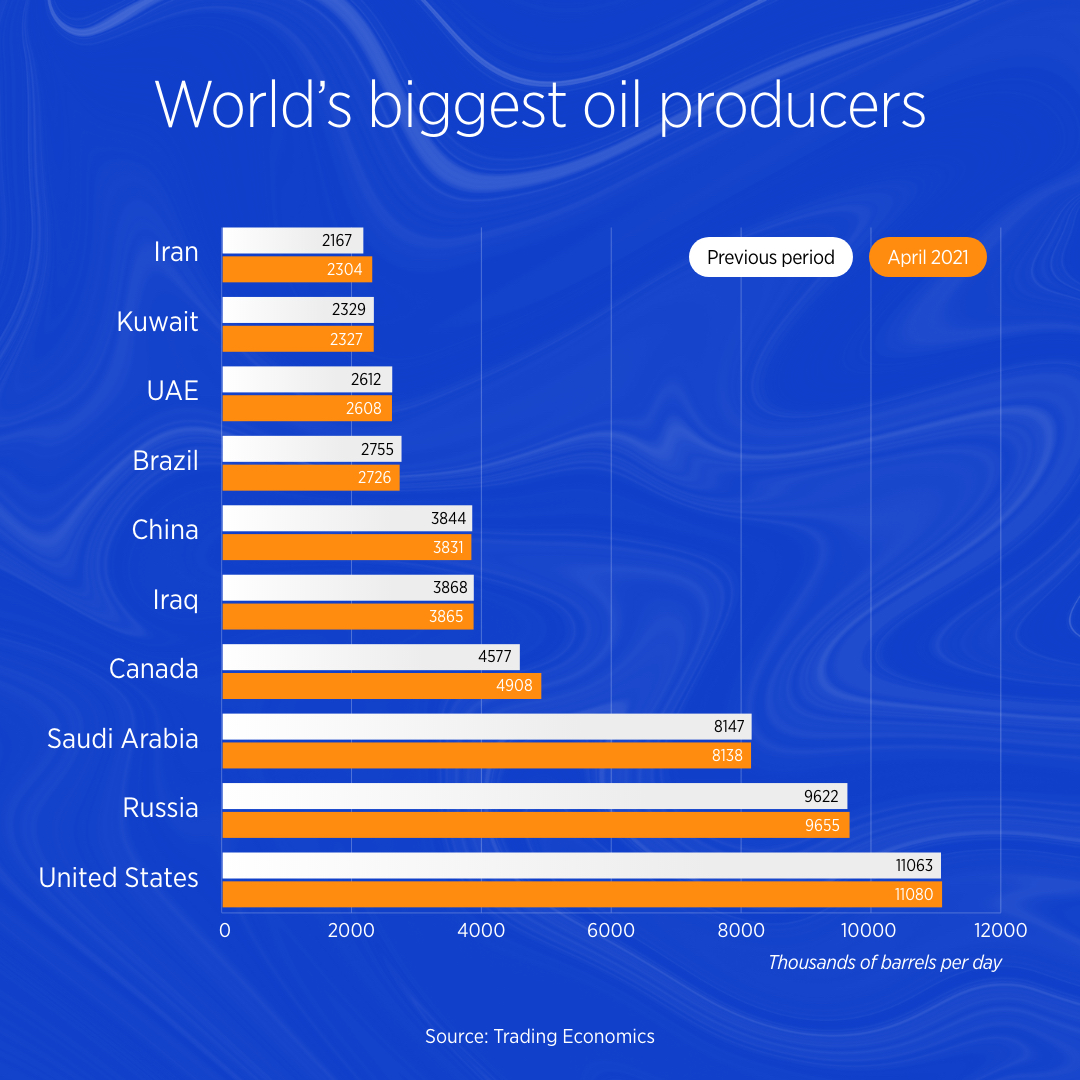 The number 1 oil production country in the world is the US, with a daily production of some 11 million barrels, representing around 20% of the total global production. Overtaking Saudi Arabia in 2013 and holding the top spot for more than eight years, the growth in output can be attributed to shale oil creating a boom in domestic production since 2014.

The US has been a net exporter since 2011, when international shipments of petroleum products exceeded imports for the first time to the tune of 439,000 barrels per day (bpd).

By state, Texas is by far the largest producer in the US, putting out 4.6 million bpd in 2021, according to the US Energy Information Administration. This would make Texas alone the fifth-largest producer on the global list. North Dakota and New Mexico are the next largest producers nationally.

Russia surpassed Saudi Arabia in 2020 to claim the second spot in this list, and today produces almost 10 million bpd. When the global coronavirus pandemic hit in March 2020 and demand for the commodity plunged, OPEC met with a coalition of partners to try and come to an agreement to reduce production. However, in an attempt to defend its market share, Russia refused to participate in additional cuts.

Eventually, Russia did agree to slow production but, in February 2021, the country reached a new agreement with OPEC to increase its output quota, ramping up supply again. This added 65,000 bpd to production in February and a further 65,000 bpd in March.

In 2020, Saudi Arabia boosted its oil output in response to Russia refusing to comply with OPEC production agreements. But while Russia increased oil output again in 2021, the Gulf nation announced it would make voluntary cuts out of concern for demand recovery. February and March saw an additional 1 million bpd output cut by the nation to avoid excess inventory.

Even with significant production cuts, Saudi Arabia still produces more than 8 million barrels of oil per day. The country’s continued reliance on the petroleum industry is underlined by the sector accounting for some 42% of the country’s GDP and 90% of its export earnings, according to World Factbook data.

By April, the head of the Canadian Association of Petroleum Producers Tim McMillan was upbeat about prospects for demand, and production rebounding in kind.

Iraq’s oil output has been growing steadily in recent years, with a current production mark of 3.8 million bpd, factoring in OPEC-mandated cuts. Due to the country’s vast oil resources, this isn’t necessarily a surprise; for example, its Majnoon site, located around 40 miles northeast of Basra, is one of the largest oil fields in the world, with around 38 billion barrels onsite.

To date, infrastructure and investment issues caused by regional conflicts have meant Iraq hasn’t fulfilled its potential for production. However, the country’s current output has some analysts wondering if Iraq could in time overtake Saudi Arabia as the Middle East’s most prolific producer of the commodity, which would also make it the largest OPEC producer.

Recently usurped in the top five by Canada, China’s oil output is still among the largest in the world. However, perhaps unsurprisingly the country is a net importer of oil due to its high demand comprehensively outstripping its domestic supply.

Brazilian oil production fell 6% in Q1 of 2021 compared to a year earlier, producing almost 2.8 million bpd, down on some 3 million the year prior. The state-run Petrobras accounts for around 75% of the country’s entire production.

Rounding out the top ten list are three OPEC nations, beginning with the UAE. The Gulf nation aims for a target output increase to 5 million bpd by 2030. The goal is part of the country’s ‘Operation 300 Billion’ initiative that aims to raise the contribution of the UAE’s industrial sector to AED300 billion (£58 billion) within the next ten years.

Kuwait’s oil industry – by far the largest industry in the country – accounts for around half of its GDP and 95% of its exports. It also has around 6% of the world’s reserves. The country continues to make substantial investments to boost production, although bold capacity targets have been repeatedly revised downwards in recent years.

Iran’s oil production has been hampered in recent times by international sanctions, but it has vast reserves, estimated at 156 billion barrels in 2019. In February, some analysts forecasted an output increase to 3.8 million bpb in the event sanctions are lifted.

Want to speculate on where oil is going next? Read our article on how to start oil trading today, and learn more about the fundamental factors that influence the value of oil.

How to trade oil

What is revenue? Definition, formula and what it means for share prices
By:
Rebecca Cattlin

5 natural gas stocks to add to your watchlist
By:
Rebecca Cattlin