Like many of its peers, Apple (AAPL) has announced that will be cutting back on hiring due to tough global macroeconomic conditions.  Microsoft, Google and Meta (formerly Facebook) have already announced similar measures to slow their hiring process due to a potential looming slowdown in economic activity.  Apple is expected to release a new iPhone 14, as well as its new MR headset in January. Apple will release Q3 earnings on July 28th.  Expectations are that revenues will rise to $82.6 billion and EPS will fall over 11% to $1.15.  See out Big Tech earnings preview here.

Since the beginning of 2022, AAPL shares have fallen from a high on January 4th at 182.94 to a low on June 16th at 129.04.  Apple then bounced to the 38.2% Fibonacci retracement level from the same timeframe near 149.63 on July 15th.  Yesterday, after the slowdown in hiring was announced, the large tech stock sold off 2.06% on the day and formed a bearish engulfing candlestick on the daily timeframe.  This is a one candle reversal pattern, indicating that there may be more downside for the stock. 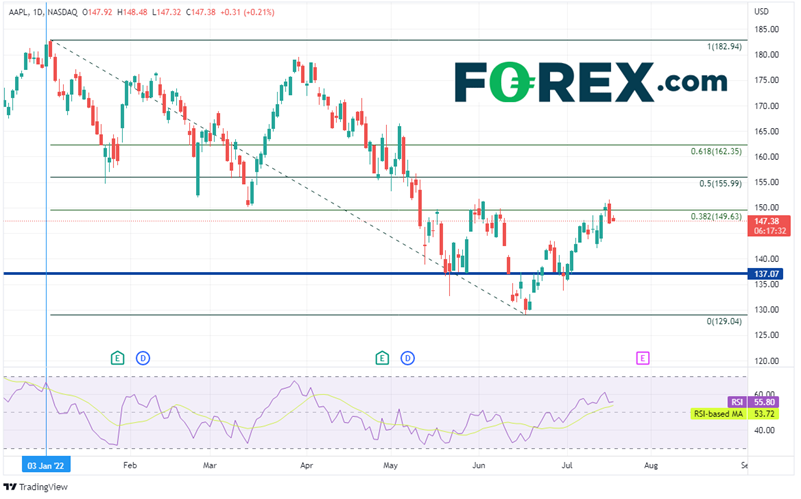 On a 240-minute timeframe, AAPL bounced from the lows of July 15th in an ascending wedge formation.  Expectations are that price will break lower from an ascending wedge.  The target for the retracement of the breakdown of an ascending wedge is a 100% retracement, or near 134.07.  First support is the bottom trendline of the wedge, near 146.73.  If price breaks below there, it can drop to the target lows at 134.07 and then the lows from June 16th at 129.47. If price moves higher, first resistance is at yesterday’s high and the top trendline of the wedge, near 151.57.  Above there, price can move to horizontal resistance at 153.27, just ahead of the 50% retracement level from the January 4th highs to the June 16th lows at 156.53. 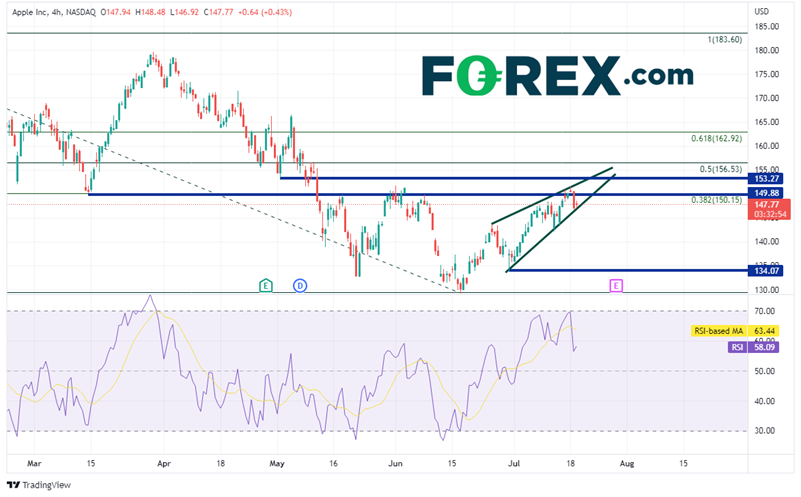 Apple announced yesterday that it would be cutting back on its hiring plans in 2023, following in the steps of other tech giants.  Apple’s share price took a hit.  Can it continue lower?  If price breaks below the ascending wedge, the target is near 134.07!