Are commodity currencies about to reverse vs the US Dollar?

As Shanghai begins to reopen after recent lockdowns, manufacturing activity in China is likely to pick up again.  (Markets will see how much damage was done when China releases its PMI data at the beginning of June). This is likely to mean more demand for commodities, and as a result, possible higher prices for commodity currencies.  NZD/USD and AUD/USD have reached key Fibonacci retracement levels on the weekly timeframe and held thus far.  Does this mean that they are likely to reverse?

NZD/USD reached a pandemic low in March 2020 of 0.5469.  The pair then made an aggressive bid higher into February 2021 and reached a high of 0.7465.  Since then, the pair has been pulling back and after 7 consecutive weeks of declines, it finally reached the 61.8% Fibonacci retracement from the March 2020 lows to the February 2021 highs near 0.6231 and held.  Last week, NZD/USD formed a bullish engulfing candle on the weekly timeframe and the pair is continuing higher this week.  First resistance is at the lows from the week of January 24th at 0.6574 and then up to the highs of the week of April 4th and the downward sloping trendline near 0.7034.  Support is at the recent lows near the previously mentioned 61.8% Fibonacci retracement at 0.6399. Below there is some minor support from April 2020 at 0.6176. 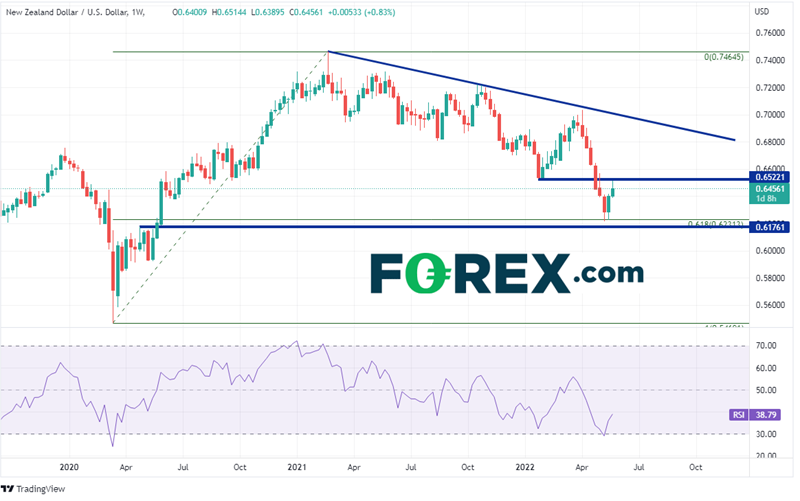 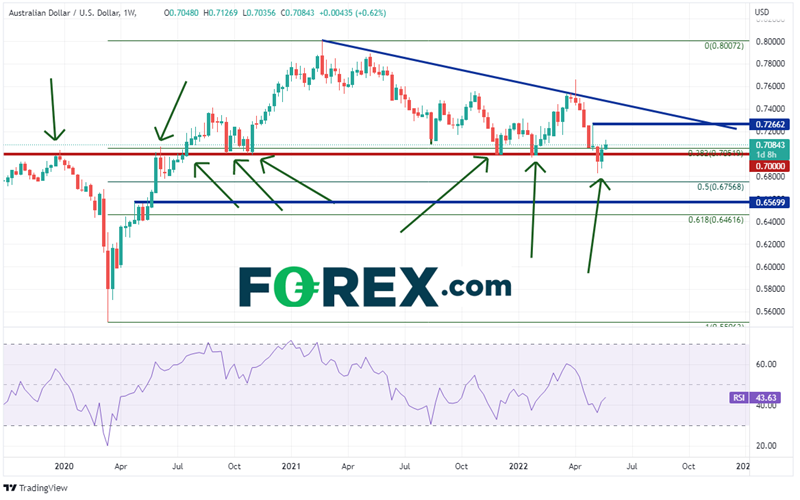 NZD/USD and AUD/USD have hit key Fibonacci retracement levels and held.  Will the pairs now being to move higher in the longer-term?  The answer may be dependent on how quickly China can reopen Shanghai and the rest of the country after restrictions and lockdowns due to Covid.