Although European indices managed to come off their worst levels by mid-morning London time, they remained vulnerable to further falls amid a bearish macro backdrop. The small bounce may be due to governments around Europe announcing measures to tackle a cost-of-living crisis and support measures against energy crisis. But the damage is already done and there are fears that a long cold winter is awaiting Europe. The latest sell-off was triggered after Russian state gas producer Gazprom on Friday said it would indefinitely halt supplies through the Nord Stream pipeline. So unfortunately, more pain is likely for investors as Europe’s energy crunch gets worse. We could see fresh lows for the year for the likes of the German DAX ahead of this week’s ECB meeting.

The impact of the energy crisis has already sent the stock markets and the euro plunging and we are continuing to see signs of a deteriorating Eurozone economy.

The closely followed Eurozone Sentix investor confidence index plunged further into the negative, printing -31.8 for September vs -27.0 expected and -25.2 in August. This was the lowest reading sine May 2020, at the height of the pandemic. What’s more, the expectations index also tumbled to -37.0 from -33.8 previously to print its lowest reading since December 2008. Investor sentiment is so bad that Sentix had this to say: "Never before in more than 20 years of history, with the exception of the financial crisis in 2008, have investors' assessments of the Eurozone economy been so weak - and at the same time expectations have been so low.”

Today’s other data releases were also not great. The services PMI was revised lower to below the boom/bust level of 50, printing 49.8 vs. 50.2 expected and last. And while Eurozone retail sales rose 0.3% in July, they were still below the +0.4% reading expected.

On top of all of this, the Fed is continuing to press ahead with its aggressive rate hikes, which is adding additional pressure on global risk assets. Bets that the Fed would deliver a hattrick of rate increases in September rose sharply after the Fed Chair Jerome Powell spoke at the Jackson Hole Symposium. Hawkish rhetoric from the ECB has also increased as Europe struggles with an energy crunch and record inflation. In August, Eurozone inflation hit a record 9.1% and Germany saw its inflation rise to its highest level in more than 40 years. Several ECB policymakers have called for the central bank to up the pace of its rate increases from an initial 50 basis point rise in July to a three-quarter point increase at next week’s meeting.

DAX heading to a new low for the year?

Following the late sell-off on Friday, the DAX gave up its entire gains it had made earlier in the day to close in the red. As a result, it created another inverted-hammer-like candle on its daily chart, providing yet more evidence that this is sellers’ market. With the German index having broken several support levels, it looks poised to take out this year’s earlier lows of 12431 (March) and 12385 (July). There are likely to be a cluster of sell stops resting below these levels from trapped longs. Thus, I am expecting to see a sharp move lower this week. 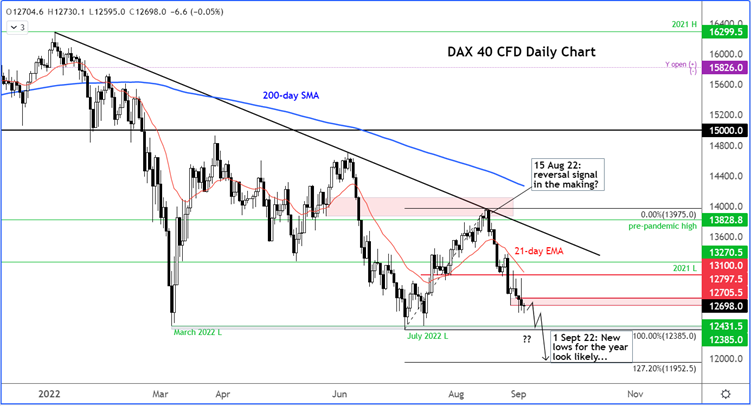