Economic, Geopolitical, and Social Implications of a Biden Presidency

* With Joe Biden taking his oath of office today, we're republishing this piece from December to help traders get up to speed with the expected priorities and policies of the upcoming Biden Presidency*

On January 20th, Joe Biden will become the 46th President of the United States. With that will come numerous economic, geopolitical and social policy changes that will be dramatically different than those of President Trump. Biden will look to expand the economy through fiscal stimulus, by increasing taxes on the wealthy, and by decreasing student loan debt. Foreign policy toward many countries, including China, Russia, Iran, Mexico, and Canada, will evolve. In addition, issues like healthcare, racial inequality, and climate change will be at the forefront of his social agenda.

Whether or not President Biden provides a specific amount of stimulus that he feels is necessary to support the economy, he has already showed his intentions by selecting Janet Yellen as Treasury Secretary.  Yellen had been more dovish, meaning that she favored stimulating the economy to address unemployment rather than focusing on fighting inflation, during her tenure as Fed Chairman, and expectations are for those tendencies to continue. When you combine a dovish Treasury Secretary with a dovish Federal Reserve, you get a well-oiled, money printing machine!  In addition, Biden plans to create 5 million new jobs by buying American products and services and investing in technology and research.  Biden also wants to raise the minimum wage to $15/hour.

Beyond using federal funds to stimulate the economy, Biden also plans on raising revenue by increasing social security taxes on those who earn more than $400,000/year. He’s also proposed repealing the Trump tax cuts, as well as increasing the corporate tax rate to 28%.

As far as funding education, Biden wants to increase federal funding for K-12 education, including tripling the amount for Title 1 funding.  For college education, Biden plans to make community colleges and public universities free for families making less than $125,000. As with Donald Trump, Joe Biden doesn’t seem too concerned about Federal debt, which is projected to rise to 108% of GDP in 2021 (see “The long-term fallout of deficit spending, quantitative easing, and debt monetization” for more on this topic): 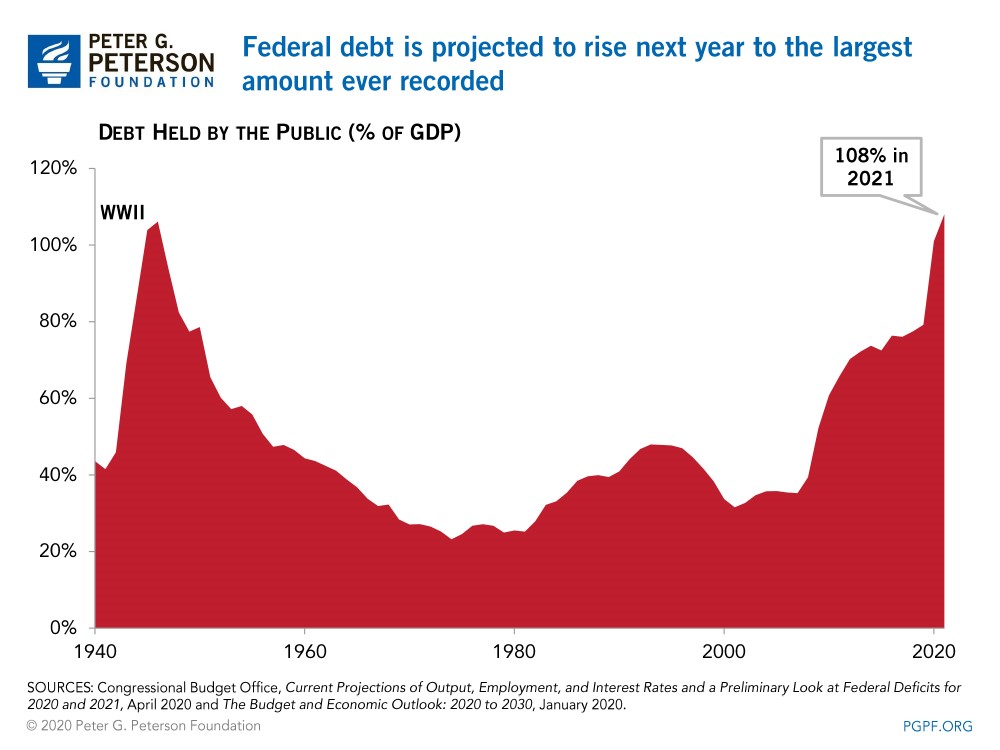 With fiscal and monetary stimulus set to continue or accelerate under President Biden, asset classes like equities and commodities could remain supported throughout 2021 and beyond, while inflation-sensitive bonds could struggle.

As Biden is considered by many to be the more “friendly” of the two candidates who ran for office in November, don’t expect much of a change of attitude when it comes to China. Although Biden may not be as tough on trade deals and the “Blame Game” for the coronavirus, he will continue to focus on halting the theft of technology from US firms.  In addition, he is likely to crack down even harder than Trump on human rights, especially when it comes to matters involving Hong Kong and Taiwan (see our article “Will US-China Relations Continue to Deteriorate in 2021?” for more). 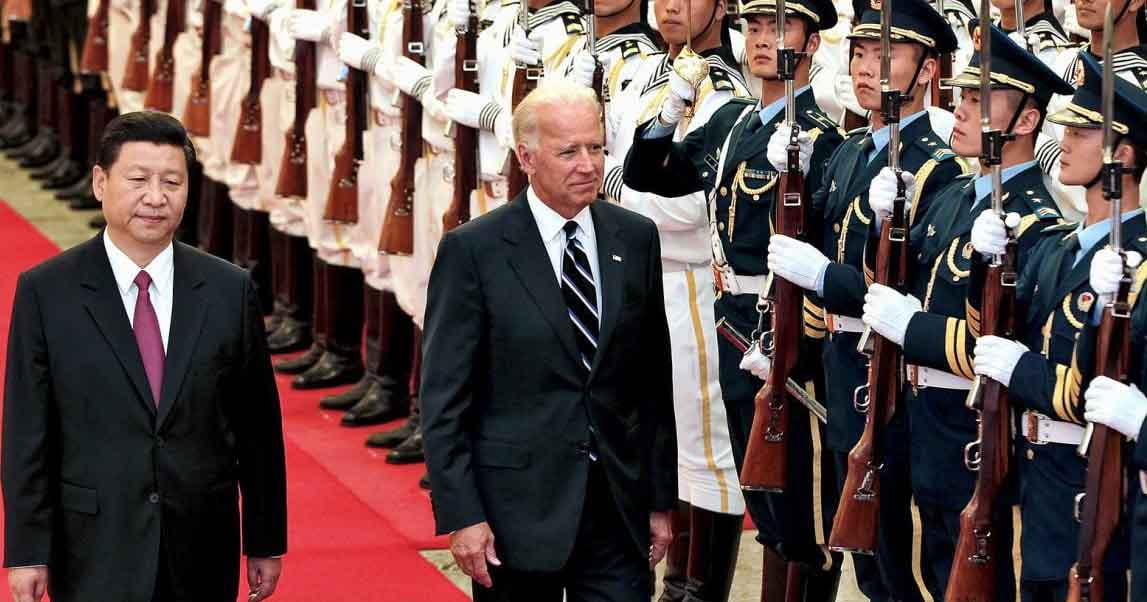 Regarding Russia, Biden will not be as friendly with Putin as Donald Trump was. Biden was the Vice-President when Russia annexed Crimea and Obama punished Russia with tariffs and sanctions.  In addition, don’t assume that he has forgotten Russia’s meddling with the US election in 2016.  And there still is no agreement between the two nations when he comes to the future of Syria in the Middle East.

In 2015, under President Obama, the US was part of a group of world leaders that signed an accord to bring nuclear power to Iran. However, President Trump pulled out of the deal and placed economic sanctions on Iran, including the financial sector. Biden said he will try and open talks with Iran once again, but only if they return to compliance with the previous agreement. Iran recently stated that they are not willing to comply with the previous terms of the deal.

What was formerly known as NAFTA is now called USMCA, the United States-Mexico-Canada Trade Agreement. And although Biden has said on record that the new agreement is better than the old one for American workers, don’t expect him to be as tough on Mexico and Canada when it comes to trade and tariffs. In addition, he will not build a wall at the Mexican border and will retract Trump’s Zero Tolerance Policy and will allow so-called “Dreamers” to remain in the US. 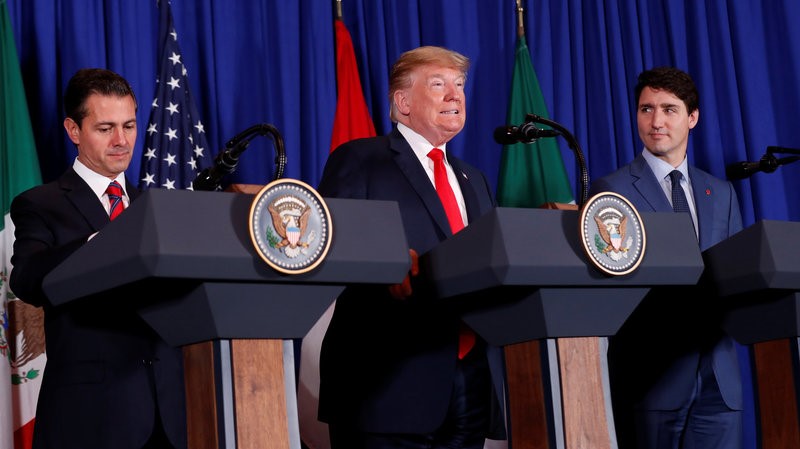 Readers should evaluate changing US policy on a case-by-case basis, but regardless of the precise changes over the next four years, there will be plenty of opportunities for astute traders. Initially, we would expect policies to favor more traditional US allies like Canada, Mexico, and Western Europe, while policies may become stricter toward traditional rivals like Russia.

One of the biggest legacies from the Obama administration was the Affordable Care Act. Biden plans on expanding on the ACA, which gives people the right to choose a public health insurance option if they don’t like that one from their employer. In addition, Biden wants to increase the value of tax credits, which would lower premiums. He also wants to work with pharmaceutical companies on setting prices for new drugs in order to make them affordable for all Americans.

However, one of the biggest social changes from the Donald Trump administration is investment in addressing climate change. Biden lays out his plans in the Clean Energy Revolution, which will invest $2 trillion in clean energy and reach new-zero emissions by 2050. In addition, the focus will be on clean energy research and innovation, ending subsidies for fossil fuels, and increasing offshore wind production.  This plan will reportedly add 500,000 public charging stations by 2030. Biden also plans on rejoining the Paris Climate Agreement, which Trump withdrew from in 2017, in which over 200 countries have agreed to reduce carbon emissions.

In terms of market implications, the green/renewable energy sector may be one of the biggest beneficiaries of Biden’s policies, though many of those stocks have already seen impressive rallies through 2020. On the other side of the coin, some health care stocks may struggle if Biden’s presidency shakes up the industry again, though even in that scenario, there could be isolated winners in the sector.

Debt ceiling explained: definition and how it works
By:
Rebecca Cattlin

Zeekr IPO: Everything you need to know about Zeekr
By:
Ryan Thaxton