European stocks opened higher but soon some of the mainland indices dipped into the negative, taking a breather from their relentless, but somewhat lethargic, rally. US futures were trading near their highs after another rally on Wall Street pushed the major indices near key technical levels, despite growth concerns over China and ahead of the release of FOMC minutes.

The latest macroeconomic data from Europe continues to paint a grim picture with the flash manufacturing and services PMIs for France and Germany, and Eurozone as a whole, remaining in the contraction territory of below 50. Although the PMI data still managed to beat expectations, that’s only because we are seeing improvement from a very low base. Activity at the Eurozone’s largest economies remain rooted deeply in negative territory, due to the soaring cost of living, rising interest rates and elevated levels of uncertainty.

PMI data recap - all in contraction:

So, the latest PMIs show some improvement from October but remain in contraction as demand conditions continue to be impacted by strong inflation. German manufacturers reported another sharp decline in new orders, which is not a great sign. So, Germany is still heading for a recession, but perhaps the contraction might be shallower than previously expected.

S&P Global notes that “… underlying demand continues to weaken rapidly, linked to sharp price increases and hesitancy among customers, with the downturn in service sector new business even gathering pace to the quickest since May 2020.” While there were some positive signs in the report, thanks in part to a mild autumn, “expectations have merely improved from ultra-low levels, meaning they are still rooted deeply in negative territory as firms continue to highlight concerns about the soaring cost of living, rising interest rates and still-high uncertainty.”

The latest PMI data comes after the European Central Bank Vice-President Luis de Guindos warned earlier this morning that the Eurozone economy will likely show negative growth rates in the fourth quarter while inflation will still remain high before starting to slow down in the first quarter.

Despite uncertainty over the economy, Europe’s major indices have rallied sharply in the last couple of months. The Euro Stoxx 50 index is among several others that have now reached technical levels where you would expect to see some consolidation or a pullback from.

The Euro Stoxx 50 has entered into the 3925 to 4000 resistance zone, where previous support and resistance meets the 61.8% Fibonacci retracement level. While it is possible we could see some weakness here, that’s not going to get the bears excited too much until we see some short-term lower lows. The most recent short-term low comes in at 3842. So, as a minimum, this level will now need to break if we are to see any serious bearish moves. 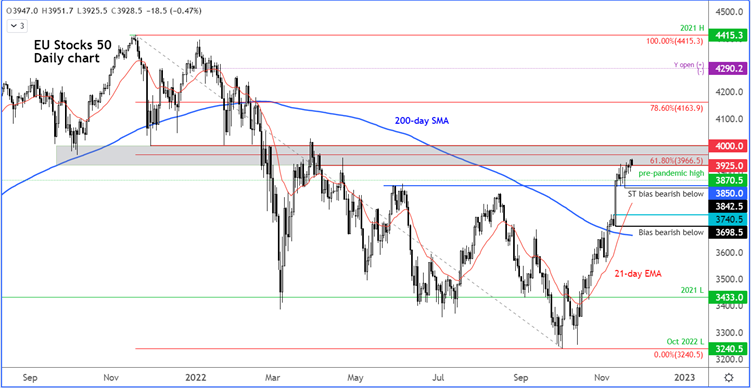