Today’s ECB decision was eagerly anticipated by traders and investors alike. Until a few weeks ago, expectations were that the central bank would deliver another 50-basis point hike. But more recently those expectations were adjusted upwards as the inflation outlook deteriorated. The ECB made it clear that they were not going to let the prospect of a looming recession stand in the way of trying to control inflation with aggressive rate increases, or slow policy normalisation.

Lo and behold, today the ECB decided to hike rates by 75 basis points instead, which caused the euro and DAX to whipsaw in initial reaction. The ECB said inflation remains far too high and is likely to stay above target for an extended period, which means more hikes are on the way as it looks to further “dampen demand.”

The ECB also raised its inflation forecasts to 8.1% and 5.5% for 2022 and 2023 respectively, implying that monetary policy will get even tighter to help bring inflation back towards the 2% target. Today’s decision comes as inflation has raced to nearly double digits in the Eurozone. Headline CPI climbed to 9.1% Y/Y in August, from 8.9% the month before, raising fears that second-round effects from energy inflation are making their way through the economy.

During the ECB Press conference, Christine Lagarde spoke and some of the headlines are provided below:

Ahead of the ECB policy decision, the EUR/USD had bounced back to turn back positive on the week and rise above parity. But when the rate announcement was made, the initial response was a somewhat negative as the news was already priced in.

As traders, we must see further signs of stabilisation before turning positive on the single currency. This is because the trend is bearish and trends can remain in place for long periods of time. So far, there’s no evidence of a bottom. So, the most likely scenario is that the euro might head lower again.

If you are bullish, then then it is worth watching the EUR/USD to see how it fares by the close of play, when traders will have digested the ECB move, Lagarde’s press conference and Powell's speech, later. If we get a close well above parity, then this will provide the bulls with something to work with in the coming days. With rates being significantly oversold and dollar becoming a very crowded traded, the EUR/USD could certainly find relief. 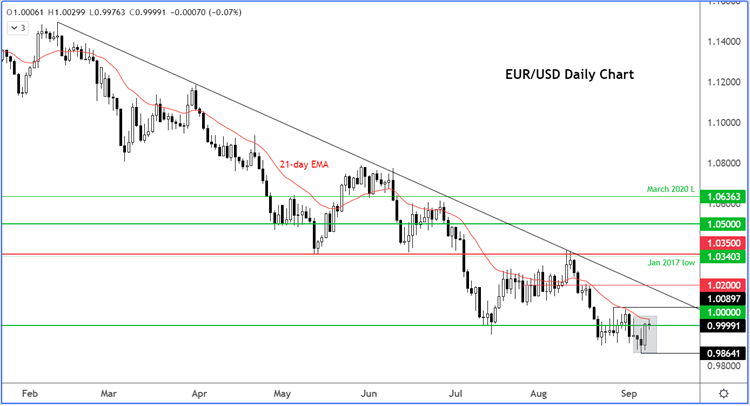