The FTSE 100 has lagged its US and European counterparts this year, but that doesn’t mean it doesn’t try to play catch-up. We noted that US indices have respected key support levels along with USD/JPY, which paints a glimmer of hope we could be headed for a bout of risk-on. If so, it could provide the FTSE100 with a much-needed tailwind and help it break to a new cycle high. 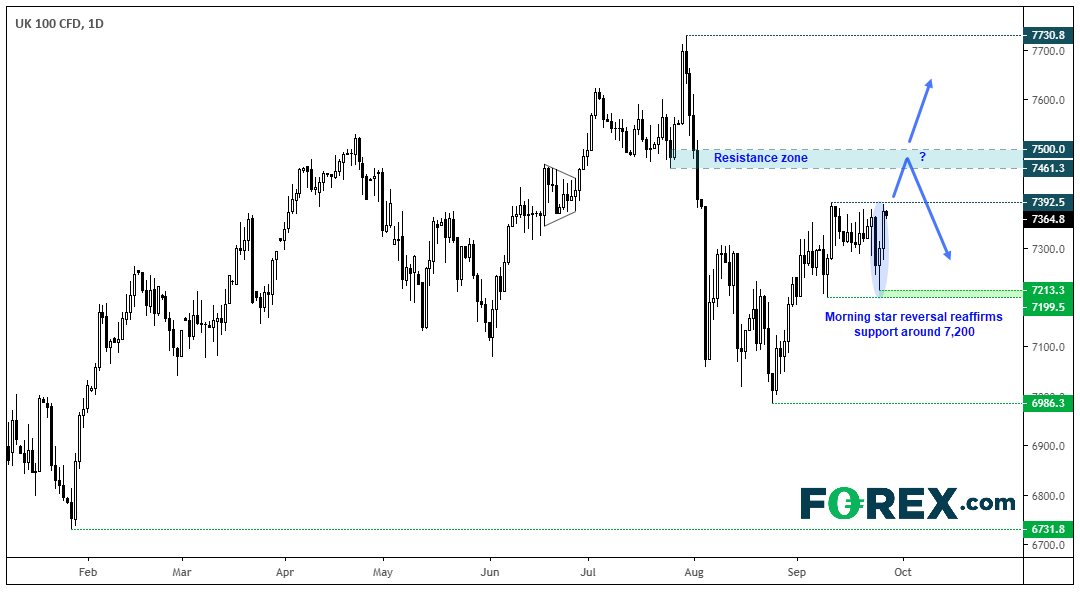 We can see on the daily chart that yesterday’s bullish candle closed just off the highs of a 3-week range. Moreover, Wednesday’s low reaffirmed support around 7,200 before heading higher and is part of a 3-bar bullish reversal pattern at support (the morning star reversal). From here’s we’re looking for a break above 7,392.50 to confirm a breakout, although we’re also mindful that interim resistance awaits around 7,461.30 so this should be taken into account for from a reward/risk perspective. 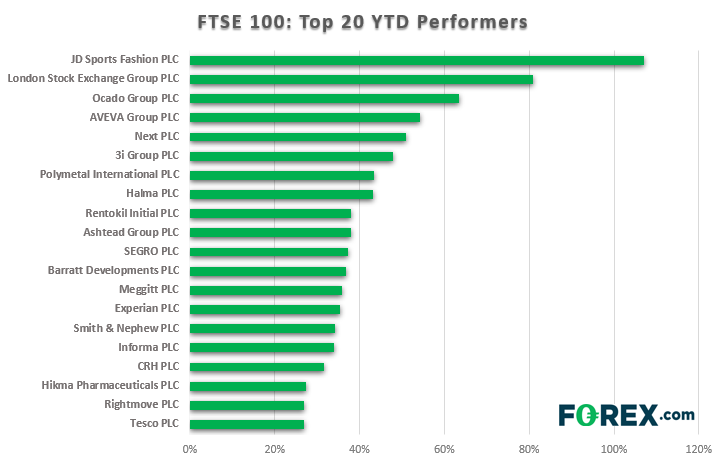 With that said, there’ll still be some stocks within the index which may sustain a better breakout, so we’ve listed the top 20 performers YTD (year to date) and selected three FTSE stocks worth following. 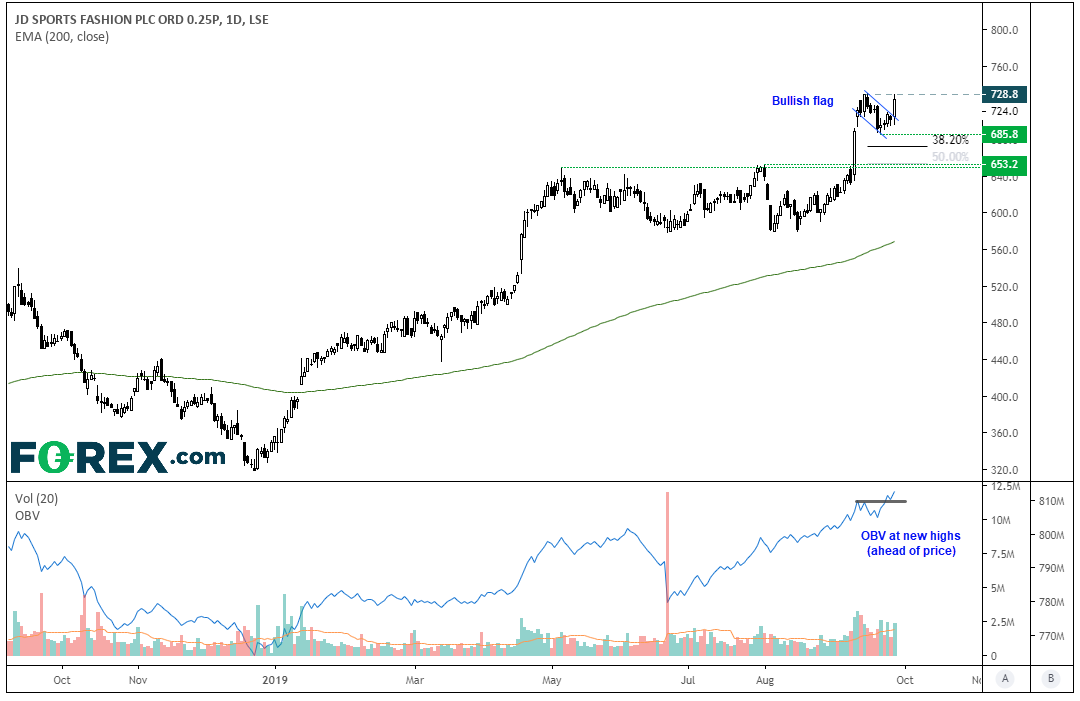 JD Sports (JD) sits just off record highs following yesterday’s range expansion day. That the pullback failed to even test the 38.2% retracement is a testament to the trend’s strength, and momentum has only increased since breaking out of its basing pattern on the 10th September. The retracement took form of a small bullish flag which is a continuation pattern in an uptrend. Furthermore, as daily volumes remain above average and OBV is at fresh highs ahead of price are encouraging signs for a bullish breakout. 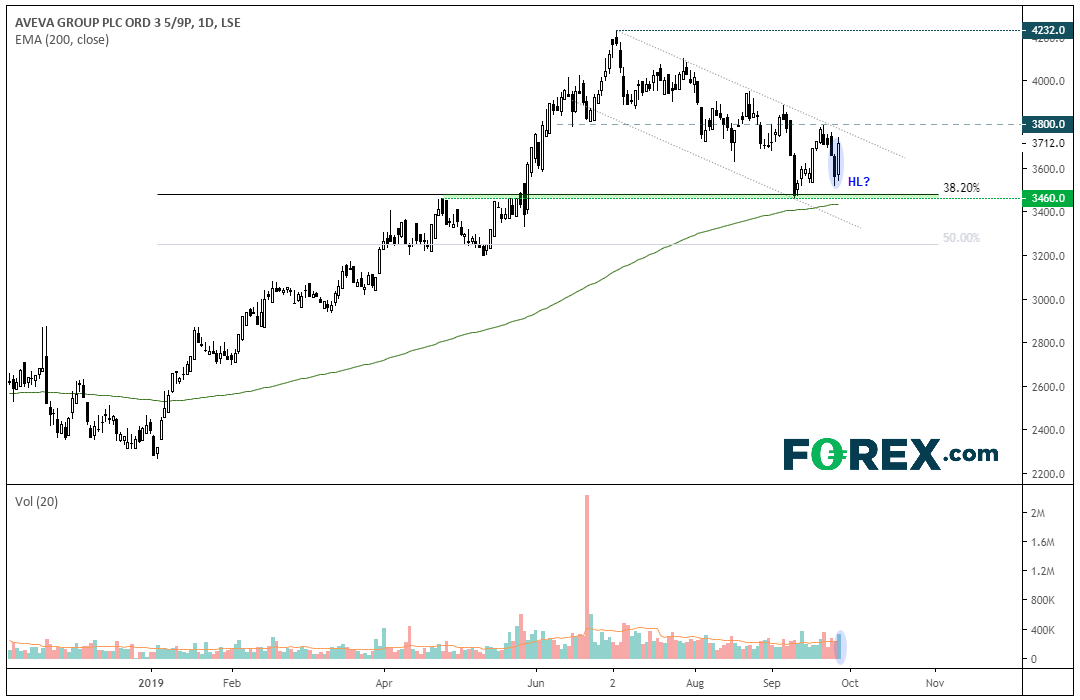 AVEVA Group (AVV) is currently trading within a bearish channel, although there are signs that it could be building up for a break higher to resume its longer-term bullish trend. The September low found support at the April high around 3460, which is near the 38.2% Fibonacci retracement level and above the 200-day eMA.

Yesterday’s 2-bar reversal marks a potential higher low, so a base could now be forming ahead of a bullish breakout. Volume was also above average yesterday which is an encouraging sign for a break higher. 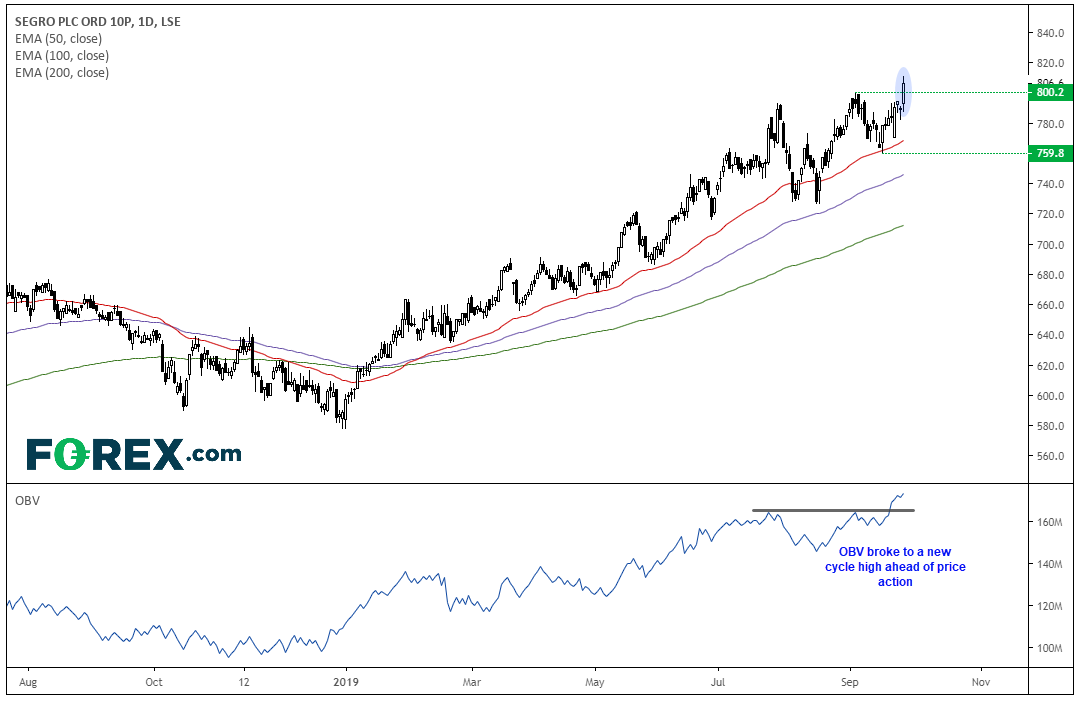 Segro Group (SGRO) trades in a clearly defined uptrend and the moving average are within bullish sequence and all pointing higher, to show momentum across multiple timeframes is bullish. Yesterday the stock broke and closed to a new cycle high above 800. Moreover, OBV (on balance volume) broke higher ahead of the breakout to show bullish demand was picking up.