GBP/CAD in focus ahead of BoC as UK GDP surprises

The GBP/CAD might not be everyone’s cup of tea but this pair will be or remain in focus today as traders respond to economic news from both the UK and Canada.

We’ve already had UK news out of the way when GDP for the third quarter came in slightly above expectations earlier this morning, which sent the pound higher across the board. The UK economy expanded by 0.4% quarter-over-quarter after increasing by 0.3% in the second quarter, beating expectations for another 0.3% expansion. The annual growth rate remained unchanged at 1.5%, however.

In the afternoon, the focus will be on the Bank of Canada as it makes its latest monetary policy decision, before Governor Stephen S. Poloz delivers the usual BoC press conference. Any surprisingly hawkish or dovish remarks from him or in the policy statement could move the Canadian dollar sharply. As far as the rate decision is concerned, we are unlikely to see a hat-trick of hikes after the central bank twice wrong-footed the markets in its previous meetings. Indeed, with recent Canadian inflation data being soft and retail sales falling, we would be very surprised to see another rate increase this time. But that’s priced in and the CAD has responded by falling back in the past few weeks against the US dollar. So, the real surprise would be if the BoC were to either raise rates or sound unjustifiably hawkish about future rate changes.

In the event the BoC is more dovish than expected and given the earlier UK GDP beat, we could see the GBP/CAD pair break decisively out of its recent consolidation zone between the 50- and 200-day moving averages today. With price already breaking above short-term resistance in the 1.6710 area, any pullback to this level may be supported in the near-term outlook. If the rally continues without a pullback to 1.6710 first then we would look for a rounded retest of the next – what would be a broken – resistance level at 1.6800 to hold as support. Our near-term bullish objective is at 1.7080, which was previously a support level and corresponds with the 61.8% Fibonacci level, too.

Our short-term bullish invalidation level is around 1.6625, the closing price from Friday and roughly the low of this week’s price action, which has supported the GBP/CAD three times in as many days. So, any clean move below this level and we would drop our near-term bullish view on this pair. In this potential scenario, the GBP/CAD may then drop to the next levels of support at 1.6480 or even 1.6200 before deciding on its next move. 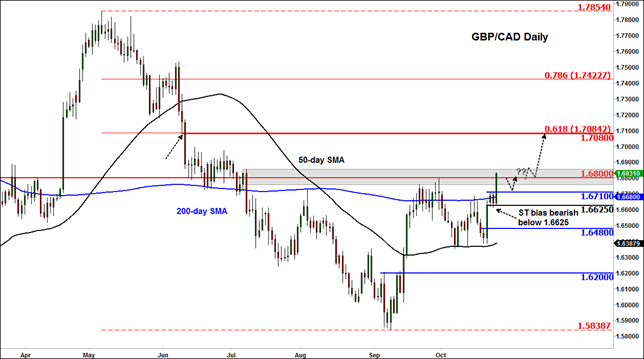