January did not deliver the returns many had hoped. Red-hot inflation prints, a hawkish Fed and rising tensions between Russia and Ukraine proved too much for equity bulls and saw investors flock towards the exit. Yet the truth of the matter is that much of this selling began late December during low-volume trade, only to see economic data and headlines trigger the next round of selling mid-January.

Technology stocks led the decline with the Nasdaq 100 facing its worst January since 2008. It was the first major benchmark to enter an official correction of -10%, and it has fallen over -18% from its record high in November to this month’s low. The S&P 500 fell -5.25% in January, although it initially fell -12.4% from its January high before a late-month recovery.

Europe didn’t fare so badly as their US counterparts, as prospects of the Fed tightening alongside a dovish ECB provided a less bearish narrative. It could be argued that geopolitical tensions surrounding Russia played the better part in forcing the STOXX 600 nearly -4% lower in January, compared to just -2.6% for the DAX.

And that leaves the January outperformer as the Hang Seng. A slew of weak economic data from China alongside easing measures from PBOC (People’s Bank of China) helped the Hang Seng shake off much of the bearish volatility. In fact, it is one of the few indices to have closed higher by around +1.7% in January. With that all said, it is interesting to note how Wall Street bounced on the last day of January which makes us question whether we have seen the corrective lows, or it is simply part of a dead-cat bounce.

The Nasdaq 100 found support just above a 161.8% Fibonacci projection on January 24th. The January lows also coincide with a 38.2% Fibonacci retracement ratio and prices have since rallied out of a choppy, sideways congestion zone. RSI (14) is no longer oversold and a bullish divergence formed on the Stochastic oscillator. We therefore expect the market could trade higher from here, although we also need to see prices break above the 200-day MA (moving average) and the 15,000 level before assuming further gains. 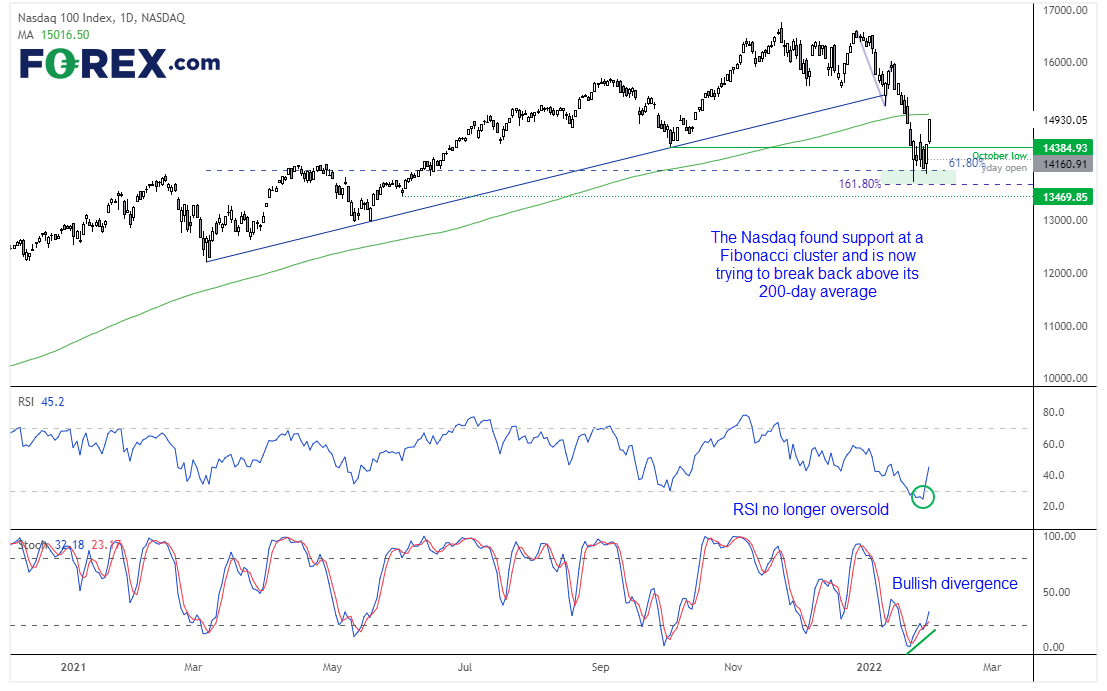 If the Nasdaq continues to bounce is could also provide further tailwinds for the Nikkei 225, due to the large proportion of technology stocks in Japan’s prime index. The RSI (14) has also rose with prices and out of the ‘oversold’ zone of 30 and the stochastic oscillator generated a buy signal. However, price action overall retains a bearish structure as it broke out of a bearish triangle on January 19th. If successful the triangle targets the area around 24,500, near a 161.8% Fibonacci level. Whilst the jury remains out as to whether the Nasdaq can trade back to its all-time highs, we continue to suspect the upside potential for the Nikkei is limited and are seeking bearish setups around key resistance levels.

Read our guide on the Nikkei 225 trading guide 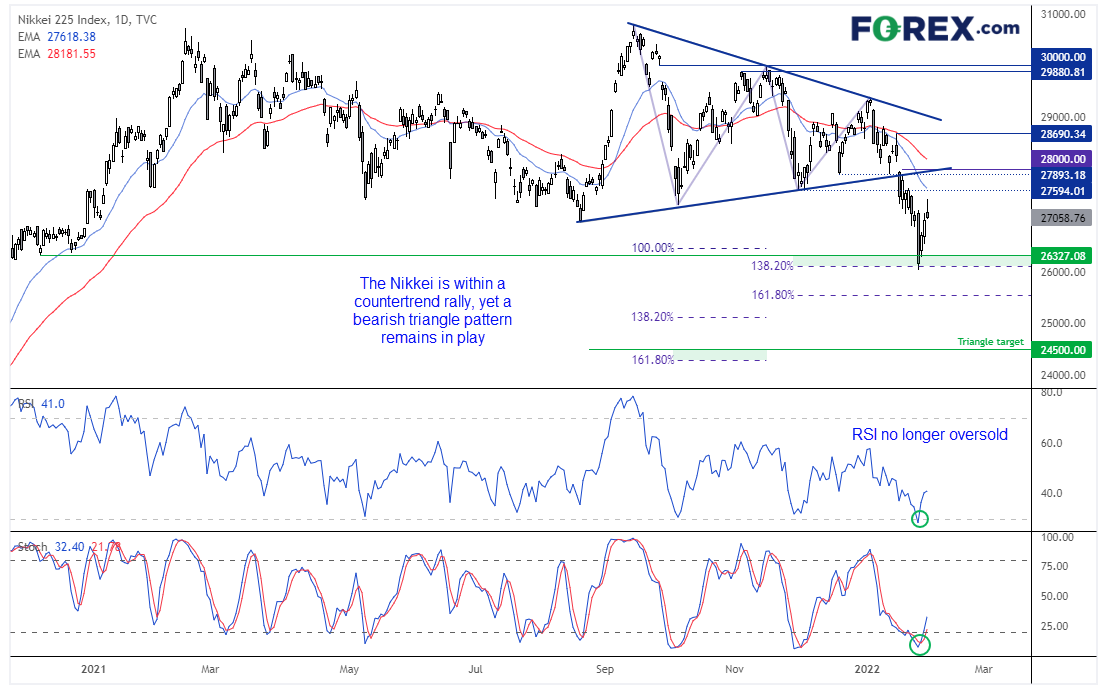