How to trade the flag pattern

Bear and bull flag patterns are two common motifs that can predict the continuation of a trend. Learn all about them here – including how to trade flags, and how flags differ to pennants.

What is the bull flag pattern?

The bull flag pattern is a piece of price action that occurs on candlestick charts after a major upward move. In a bullish flag pattern, the market consolidates between two parallel lines of support and resistance, before eventually breaking out through resistance and resuming the original uptrend.

The support and resistance lines form the flag from which the pattern gets its name, and the preceding upward move is the pole. Often, the market’s price will move downwards within the flag. 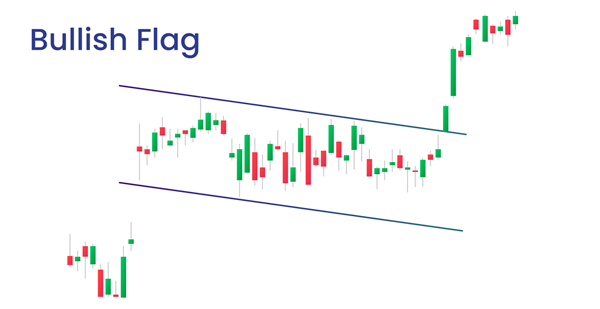 A bull flag sees a pause in the original uptrend, but not a strong enough one to see a reversal. Instead, the price remains flat or moves slowly downwards as bulls ensure that the market doesn’t fall too much.

What is the bear flag pattern?

The bear flag pattern is the opposite of the bullish one. After a significant downward move, a market becomes stuck between support and resistance, often beginning to trend upwards. But then a breakout occurs beyond the support line, and the original bearish conditions resume. 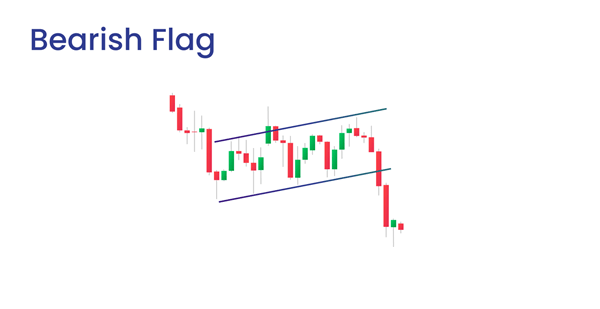 The flag in a bearish pattern may point upwards or look flat – as long as the support and resistance lines are parallel.

How to trade a bearish or bullish flag pattern

To trade a bearish or bullish flag pattern, you’d look to open a position shortly after the market breaks out, so you can profit from the resulting move. In a bull flag, you’d place a buy order above the resistance line. In a bear flag, it’s a sell order below support.

Flags can represent a useful point to join an ongoing trend. The price retracement within the flag offers an opportunity to buy or sell the market at a better price than if the trend is still going strong.

As with any pattern though, flags aren’t 100% effective. So you’ll want to confirm the trend before you open your trade.

Learn more about how to trade patterns.

One useful way to confirm a flag is to watch the market’s volume. In a bullish flag, volume should be high during the initial uptrend, then peter out as the market consolidates. Once the breakout hits, volume should spike once more.

You could interpret a flag pattern as a brief pause in the middle of a sustained trend. The lack of volume signals that the retracement doesn’t have the same strength as the initial move, making it more likely that the trend will take over again.

Bearish volume works a little differently. It may not recede throughout the consolidation period, instead remaining flat.

You can also confirm a flag pattern by waiting for the initial trend to resume before you open your position. Essentially, this just involves delaying your order by a period or two to ensure that the trend has definitely started once more.

Even if you’re sure that your flag is going to see a continuation, it’s always worth paying attention to risk management as part of your strategy. Most traders do this using a stop loss and a take profit.

The stop loss automatically closes your position once it moves a set number of points against you. It’s often a good idea to place your stop just before the line which the market broke through – so below the resistance line in a bullish flag pattern, or above support in a bearish one.

That way, if the trend doesn’t form then you won’t incur too much loss.

Take profits, on the other hand, will close a position when it earns a certain amount of profit. There are two schools of thought on where to place your take profit on a flag:

You don’t have to pick one exclusively. You could, for instance, move both your stop and take profit as the market approaches the first profit target.

When deciding where to place closing orders, remember your risk-reward ratio.

The best way to master flag patterns is to start looking for them on live markets. You can practise trading flags with zero risk with a FOREX.com demo account, which comes with virtual funds to try out technical analysis on our full range of live markets.

Then, when you’re ready to trade with real capital, follow these steps to open a live FOREX.com account:

What is the pennant pattern?

The pennant pattern is a chart motif that looks similar to a flag – and also signals a continuation – but where the support and resistance lines converge in a symmetrical triangle instead of running in parallel. If you spot a flag with contracting price action, you may have a pennant instead. 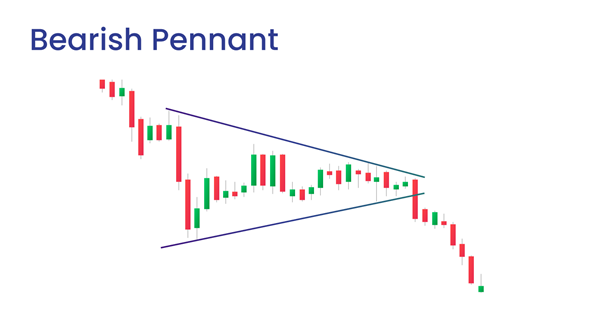 A pennant represents the same sentiment shift as a flag. After a strong move up or down, momentum slows, alongside stalling or falling volume. Then, a breakout occurs that resumes the original trend.

It’s worth noting that both flags and pennants are considered short-term patterns. If either one pushes into the long-term, you may have a rectangle or a symmetrical triangle instead.

Found a pennant that’s ascending or descending instead of staying symmetrical? You’ve got a wedge pattern.