Is ASX 200 Index Rebound Over?

By :
Global Author
Australia's ASX 200 Index has retreated from 5570 to 5195 since last Friday. Is the rebound from March low over?

Recently, Reserve Bank of Australia governor Philip Lowe said the Australian economy is expected to contract by 10% over the first half of the year and jobless rate might reach 10% by June. After that, Let's see how the chart performs! 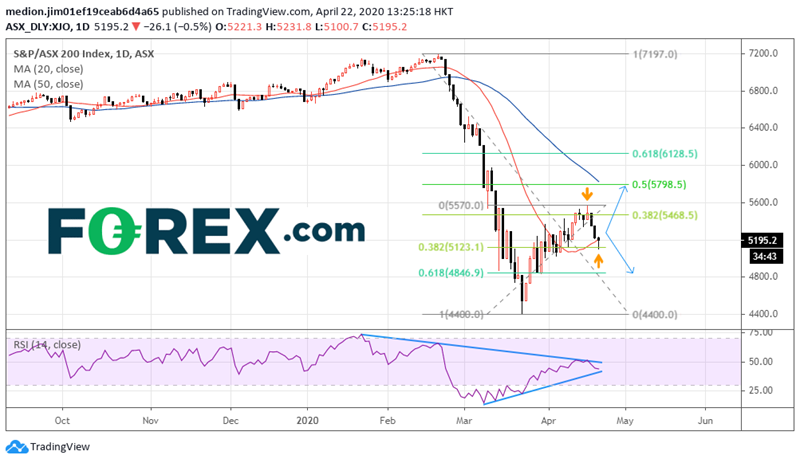 From a technical point of view, the ASX 200 Index failed stand above 5870 (around the 38.2% level between the February top and March low) on a daily chart. It suggests that the index would be in a weak position of the downtrend from February. However, the index remains holding above 5120 (around the 38.2% retracement of current rebound). It means that the index would be in a strong position of current bounce. In addition, the candlestick is also forming a hammer, a pattern for potential bullish reversal signal. Besides, the 20-day moving average is turning upward and acting as support now.

If the index prices close below the 38.2% level of current rebound at 5120, it would enhance the bearish outlook and bring a deeper correction to 4845 (around the 61.8% of current rebound). A break below this level might consider a re-test of the March low at 4400.

Alternatively, if the index crosses above the previous high at 5570, the prices should reach 5800 (around the 50% level between the February top and March low) on the upside.
Related tags: ASX Indices Australia