Is USD/CNH set for a multi-month rally?

The Chinese yuan hit its lowest point in 3-month yesterday and volatility has been on the rise, which is noteworthy given it is a tightly controlled currency. And there have been a few driving factors behind its recent appreciation. Growth concerns which stem from Beijing’s ‘common prosperity’ at the expense of Western profits is a theme which has been present for some time. But the PBOC’s surprise decision to not cut rates further this week saw their fall, and PBOC set their reference rate below market expectations for two consecutive days. And there's also been a significant rise in covid cases resulting in lockdowns for millions of people. 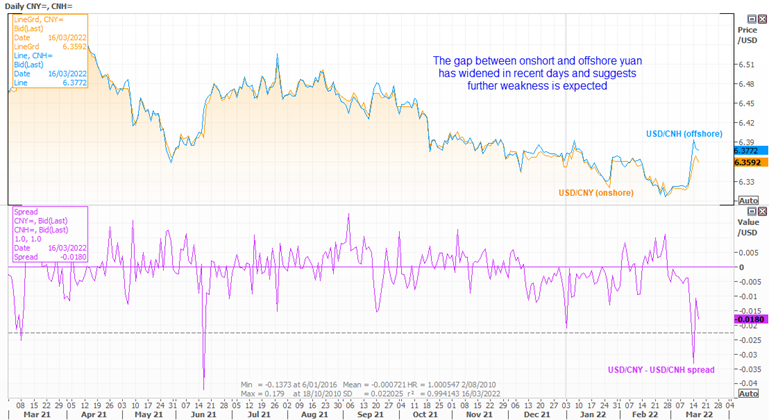 And this has seen offshore yuan (CNH) traders lower than the onshore yuan (CNY) to suggest traders think further depreciation is on the cards – at least over the near-term. Furthermore, the gap between onshore and offshore was its widest in in 9-months earlier this week.

But China is also getting dragged into Russia’s geopolitical warfare, which is further weighing on growth concerns as it raises the prospects of Western sanctions aimed at China, alongside the cost of supplying military aid. But it is also worth noting that the yuan is not just rising against the dollar, as the CNY reference rate has increased against all currencies (on aggregate) over the previous 3-months.

Have we seen a major inflection point on the yuan?

The following chart raises a couple of key point, which leans towards the potential of a multi-month rally on USD/CNH. Firstly, back in 2015 that the PBOC (People’s Bank of China) devalued the yuan which saw USD/CNH burst above 6.3 as part of its 4-year rally. In 2018 (amidst a trade war during Trump’s presidency) USD/CNH pulled back to 6.3 and, after several volatile months around that key level, rallied aggressively higher as the yuan was devalued once again. 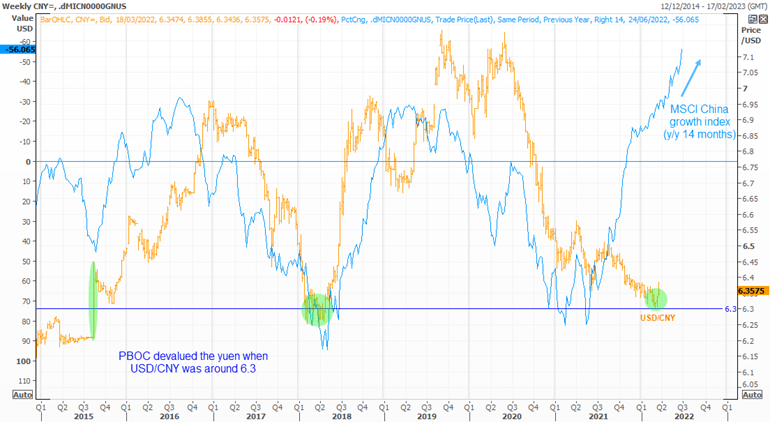 But notice how this time around, momentum has been very slow as USD/CNH gradually crept it way towards (but not quite to) 6.3, before rallying from that key level. On a sidenote, it is interesting that this rally began just after the Russian ruble collapsed and the West implemented harsh sanctions on Russian oligarchs and selected banks.

And this brings us to our second point. MSCI’s China growth index shares an interesting (inverted) correlation with USD/CNH. Using MSCI’s own description, the index “captures large and mid-cap securities exhibiting overall growth style characteristics across the Chinese equity markets”. 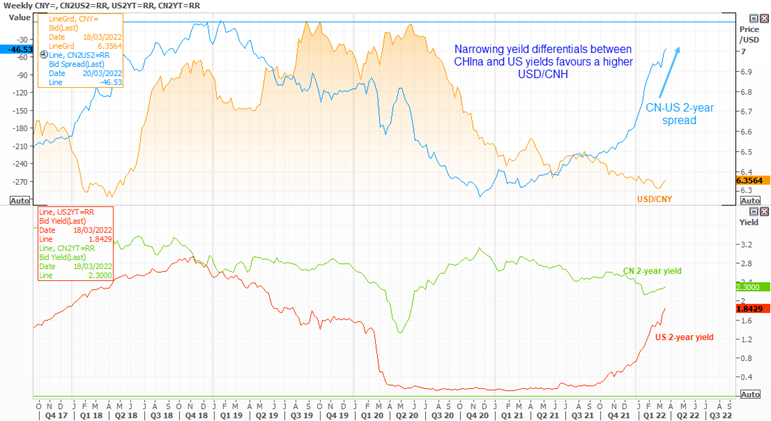 The blue line is a y/y % change of the MSCI China growth index (CGI) and shifted forward 3-months as it is supposedly a leading indicator for USD/CNY. The CGI troughed in the first half of 2021 and has continued to accelerate higher ahead of USD/CNY. Given that the Fed are now on an aggressive rate-hike cycle, and the CN-US 2-year yield has narrowed to its narrowest level since February 2021, we think there is reason to expect a higher USD/CNY going forward.

USD/CNH pulls back ahead of FOMC meeting

It’s 3-day rally peaked out yesterday after probing the 200-day eMA and monthly R2 pivot. Prices have since pulled back and trade in a tight range ahead of today’s FOC meeting, where the Fed are widely expected to raise rates by 25 bps. Should they disappoint with a slightly dovish / cautious hike then we’d expect USD/CNH to pull back further, in which case we’d look for evidence of support / higher low for future long setups.