Stocks could resume rally next week

*** Please note: I will be away the whole of next week and will return on Monday June 6 ***

Stocks found some much-needed support this week on the back of a rising oil price to $50 a barrel and as concerns about the negative impact of a potential June Federal Reserve rate increase diminished. Traders realised that a small rate rise, if seen, would not materially impact the world’s largest economy where monetary policy remains exceptionally accommodative. Other major central banks such as the European Central Bank and the Bank of Japan are providing the monetary stimulus the Fed once used to, anyway. These central banks, unlike the Fed, remain pretty much dovish. In fact, the BOJ is widely expected to expand its QE programme at some stage this summer. The ECB, having announced an extension back in March, is unlikely to make further changes in QE when it meets next week. After all, the ECB will start purchasing corporate bonds next month. So expect to see some "wait and see" inaction from the ECB in the coming months. The ECB’s policy is aimed at driving yield-seeking investors out of fixed income and into higher-yielding assets, like equities. For this reason, we continue to remain bullish on stocks.

However in the short-term, we could see lots of volatility in the markets, given, for example, the risks that Britain may vote to leave the EU on June 23. In the more near-term outlook, next week’s busy schedule of economic data means volatility could spike. Monday, though, should be quiet one because there are bank holidays in the UK and US. But there will be plenty of US macro data to look forward to throughout next week, culminating in the release of the all-important nonfarm payrolls report on Friday. If next week’s data suggests the world’s largest economy is on the right track then the probability of a rate rise in June could increase further. The most obvious implication of this would be on the dollar and thus buck-denominated commodity prices such as gold and silver. Precious metals miners could therefore underperform if gold or silver prices fall as a result of stronger US data. The opposite is also true.

As well as key US data, China will add to the mix by reporting the latest manufacturing and services PMI readings on Wednesday. Recently, growth concerns about the world’s second largest economy resurfaced following the release of some disappointing data. If the trend of weaker data continues or deteriorates then Chinese equities could lead a global market sell-off. Commodity stocks would therefore be in focus in mid-week. And not just because of Chinese data, for the OPEC is also meeting on Thursday, as we discussed in our oil report earlier HERE. Depending on the outcome of the cartel’s meeting, oil prices, and therefore energy stocks, could move sharply.

From a technical point of view, the major global indices appear bullish across the board. Germany’s DAX could be an interesting index to watch given the growing divergence of monetary policy between the Fed and the ECB. The DAX has actually bounced very strongly from the key 9740-9795 support area we highlighted in our report last week, which can be found HERE. As a reminder, we pointed to the lack of any significant follow-through in the selling pressure after the breakout form the bullish channel. To us, this showed the sellers were struggling to maintain control. Sensing this bearish weakness, the bulls stepped in and pushed the index decisively higher. Consequently, several resistance levels broke down, including the prior highs at around 10100, a level which could now turn into support upon re-test. The DAX has also broken above the 200-day moving average at 10115 and the second of the three bearish trend lines. The next potential area of resistance to watch is between 10385 and 10475 (shaded in red). This is where the 61.8% Fibonacci retracement meets the prior high. If the DAX moves above here, we would have another "higher high" in place which would further cement the bullish trend. As things stand, a break below 10100 support would be deemed a bearish development in the short-term, while a move below 9750 would completely invalidate the above bullish scenario. 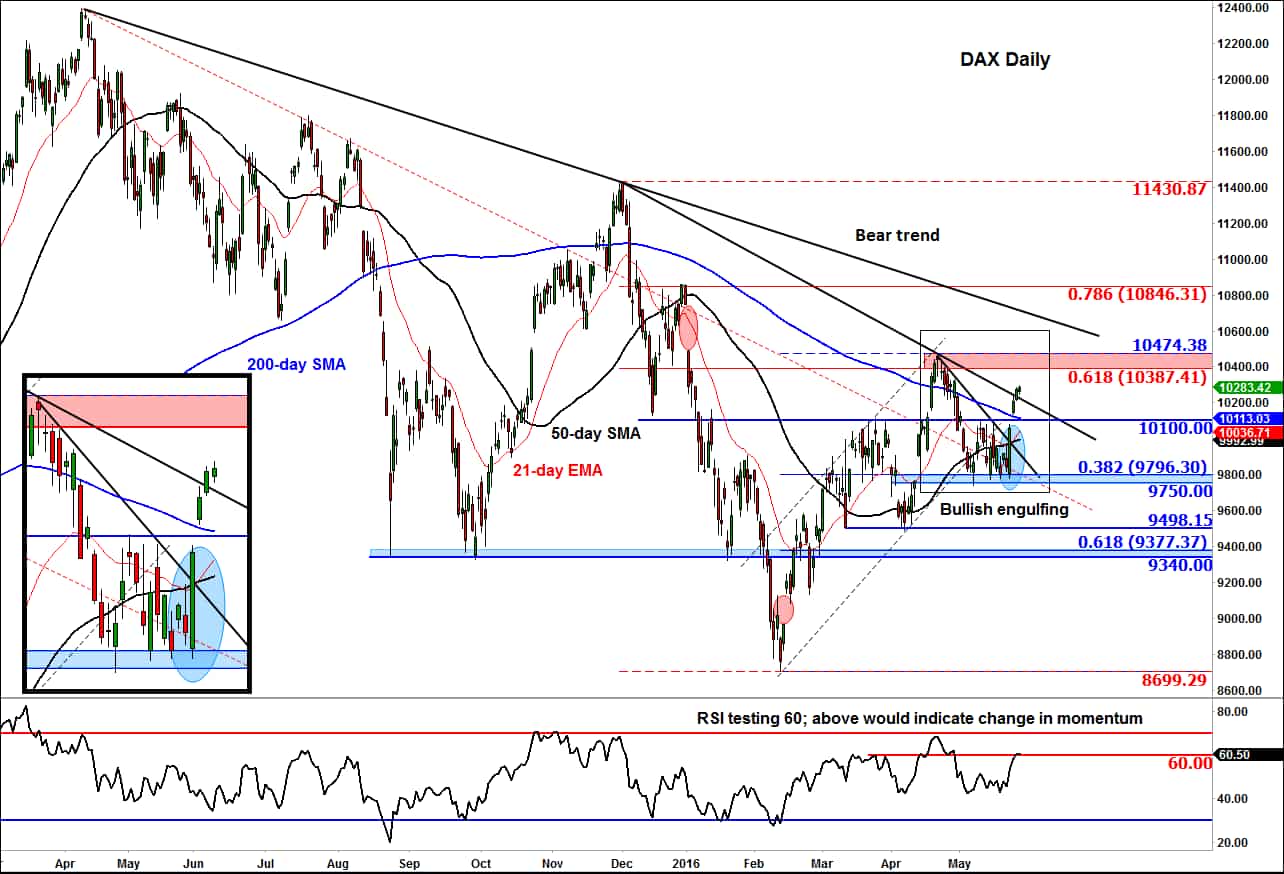