How to trade the doji candlestick pattern

What is the doji pattern?

The doji pattern is a single candlestick that appears on trading charts. It has little to no body, meaning that the market’s opening and closing prices for the period were roughly (or exactly) the same.

Essentially, a doji means that – whatever other activity occurred during the candlestick – neither bulls nor bears were able to take control, and they ended up cancelling each other out.

That might not sound like it provides much of a signal on where the market’s headed next. But depending on where the doji lands, and what type of doji you see, it can be a hugely useful pattern.

There are four types of doji that you’ll generally encounter on trading charts: long-legged, dragonfly, gravestone and four-price. Let’s look at each one. 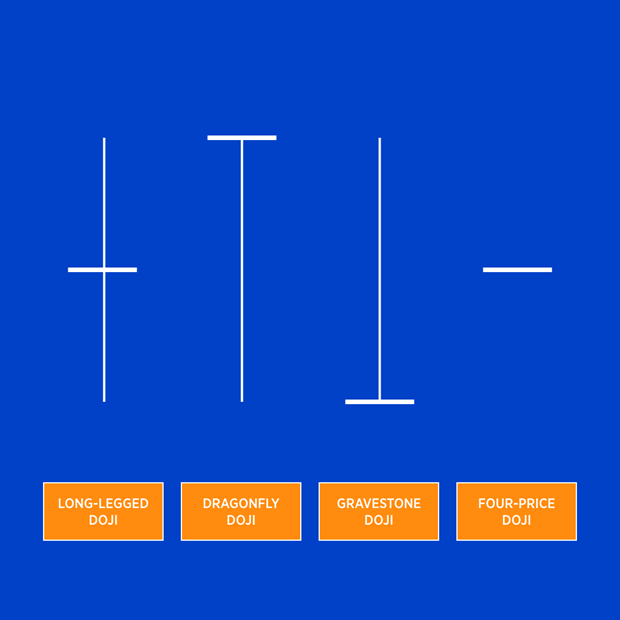 A dragonfly doji has a long upper wick and little to no lower wick. The market saw strong buying sentiment in the period, but by the end of the period it had been cancelled out. This can be a sign that an uptrend is coming to an end, or perhaps that a downtrend is set to continue. After all, it looks the sellers ended the session in control.

Seen a dragonfly with a wider body? This could either be an inverted hammer or a shooting star.

Gravestone doji are the exact opposite of dragonflies. A long lower wick, signalling a bear run that reversed by the session’s end, and nothing (or close to nothing) on the other side. A gravestone doji on a downtrend can be a reversal signal, whereas it might point to a continuation of bullish price action.

A gravestone doji with a wider body can either be a hammer or a hanging man.

A four-price doji, finally, is a candlestick with little to no body and little to no upper or lower wick. They’re extremely rare, but easy to spot because they almost look like a gap on the chart.

The market saw barely any volatility whatsoever, close to flatlining with the open, close, high and low prices all equal: hence the name. Essentially, it’s the exact opposite of a long-legged doji.

Context is hugely important with doji. One key example of doji in context is the doji star pattern, which contains a doji as the second candlestick in a three-stick run. A doji star is seen as a strong signal for a reversal.

In a bullish doji star, a long red candle appears at the end of a bear run, followed by a doji. Then, at the end of the pattern, a long green stick shows the beginning of a new upward move. Essentially, the doji shows the moment of indecision as the sellers start to lose out to buyers – but it’s the candles on either side that give context to the move.

You can also form a doji star with a spinning top in the middle, but the signal isn’t as strong.

The opposite of a morning star is an evening star pattern. Here, a long green candlestick appears on an uptrend, but the bull run pauses with a doji. Then, it reverses with a long red stick which kicks off a new downtrend.

Again, the doji is the key candlestick here, showing the moment that momentum began to turn.

Learn more about how to trade the morning star pattern.

You can try out trading doji risk free with a FOREX.com demo account. It gives you virtual funds to hunt for doji across 1000s of live markets, including forex, indices, shares and more.

What does a doji mean?

Whichever type of doji you encounter on the markets, it usually means that sentiment is split. Neither bulls nor bears had the upper hand by the end of the session, despite any price action that occurred within.

On a flat or rangebound chart, that might not provide much to go on. But if you spot a doji in a strongly trending market, it could be a sign that momentum could be waning, signalling a possible impending reversal.

Say, for example, that you find a dragonfly doji after a long bear run.

The long lower wick tells us that the market continued to fall at the beginning of the period. But by the end, buyers had intervened, and all the losses had been overcome. If that continues, then the downtrend might be over.

Doji don’t always mean a reversal is on the way, however. Say that we spotted a gravestone doji on our bear run instead. Here, buyers stepped in to try and take control early in the session – but were swiftly beaten back by sellers. If that price action continues, then the bear run will carry on, making it a continuation pattern.

What long-legged and four-price doji mean

So far, we’ve mostly focused on the dragonfly and gravestone doji. That’s because they appear more often and give a clearer prediction of possible future movement. Long-legged and four-price doji work a little bit differently.

Long-legged doji offer the clearest possible sign of indecision in a market, with wild price swings as bulls and bears vie for control. That doesn’t necessarily mean that a reversal or a continuation is on the cards. Instead, the market could break up or down depending on who comes out on top.

Four-price doji, on the other hand, may be a sign that liquidity is low. There’s not enough volume to drive any price action whatsoever. If this is the case, then you might be best off staying out of the market until trading picks up again.

How to trade doji

How you trade a doji depends on the signal your pattern is generating. The most common signal from a doji is a possible impending reversal – after all, they offer a sign of indecision, which tends to precede a change in direction.

Like any reversal pattern, you can trade a doji by opening a position that profits from the possible reversal. In our dragonfly example above, you’d buy the market in the hope that buyers can take control.

However, a doji on its own isn’t necessarily a strong signal, so you’ll want to make sure that you have a stop loss in place – and that you’ve confirmed any likely move.

Setting your stop loss with a doji

Unlike some other patterns, doji can’t typically tell you where to place your stop loss. Instead, the general rule of thumb is to find a nearby level of support (for a short trade) or resistance (for a long one) and put your stop loss just beyond it.

After all, if your chosen market is breaking through significant levels in the opposite direction to your predicted price action, chances are your trade has failed.

To help ensure that the trend you’re hoping for has actually kicked off, wait for a couple of periods before opening a position. If the next two candlesticks show strong movement in the right direction, it’s more likely that a new trend has formed.

However, on their own doji aren’t hugely strong signals. So, you may want to consider using them as part of a wider confirmation strategy.

Some traders, for example, might use technical analysis tools like the relative strength index (RSI) or stochastic oscillator to find opportunities first and foremost. Then, if their indicator points to an impending reversal, they’ll look for a doji as an extra sign that momentum is switching.

Follow these steps to start trading doji with FOREX.com today:

Finally, let’s examine what a doji trading strategy might look like. For this example, we’re going to look at trading EUR/USD using a combination of doji and the Fibonacci retracement tool.

The Fibonacci retracement tool is a technical indicator that plots possible areas of reversal on a chart, after a market has made a significant move. As such, the first step in our doji trading strategy is to watch for EUR/USD to make a big move – for instance, from 0.9960 to 1.0180 – before a countertrend takes over.

These are possible areas of reversal, but we’ll want a signal that the market is going to retrace before we consider trading. One such signal could be a doji. If we spot a doji on one of the Fibonacci levels, then it’s a stronger sign that the countertrend may be over.

We’ve aligned two signals two create this opportunity, but it’s still a good idea to wait for confirmation before we open the position. In this case, we could see if the next session takes the form of a green candlestick, which could be the resumption of the original bull trend.

We can use the Fibonacci tool for our maximum loss and target profit here, too. If the market continues down to the next Fibonacci level, then our trade has likely failed, so this makes a good area for our stop loss.

Conservative traders can choose the next level up for their profit target, or if you believe a stronger trend will take over then you can look to the 50% or 61.8% areas.

Tesla: Will Twitter remain a drag on TSLA stock?
By:
Joshua Warner