The US Core PCE has always been considered the Fed’s favorite measure of inflation.  Yesterday, during the Fed Chairman’s speech at the Brookings Institute, Powell confirmed it!  As a result, traders were paying particularly close attention to Octobers release on Thursday.  The results were roughly in-line with market expectations.  The headline PCE was 6% YoY vs and expectation of 5.9% YoY and a previous reading of 6.3%.  The more important Core PCE was 5% YoY vs an expectation of 5% YoY and a September reading of 5.2% YoY. During Powell’s speech on Wednesday, he noted that he expects inflation to remain high through much of 2023, however it will slow during the year.  As a result, Powell basically told the markets that the FOMC will only be hiking rates by 50bps at the December meeting.  In addition, Powell said that “the Fed will continue tightening rates until they have plenty of evidence that inflation is slowing”.  With inflation well above the Fed’s 2% target (although moving in the right direction), one must consider how much more the Fed will raise rates. According to the CME Fedwatch Tool, markets are currently pricing in a 50bps rate hike in December, 25bps in February, and 25bps in March. If Core PCE continues to move lower over the next few months, will the Fed stop hiking rates before March?

EUR/USD has been moving higher since September 28th, which coincides with the day that the US Dollar Index topped.  More recently, the pair ran into significant resistance at prior lows and the 200 Day Moving Average between 1.0348 and 1.0368.  However, with the US Dollar selloff after Powell’s speech, EUR/USD continued to push higher.  Today, the pair ran into the 50% retracement level from the highs of February 10th (the Year-to-Date high) to the lows of September 28th (the Year-to-Date low), near 1.0515. 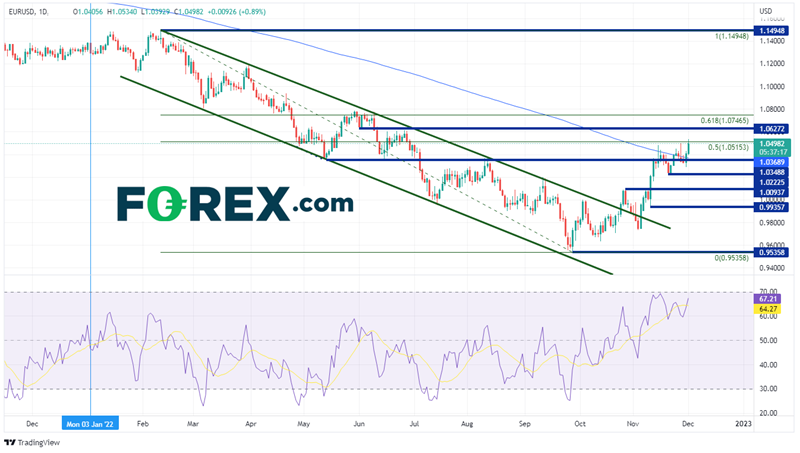 On a shorter 240-minute timeframe, EUR/USD formed a flag pattern after making a high at 1.0482.  The pair then pulled back to the 50% retracement level from the lows of November 10th to the highs of November 15th near 1.0226 and proceeded to break higher out of the flag pattern.  The target for a flag pattern is the height of the flagpole, added to the breakout point.  In this case, the target is near 1.0760.  We need to go back to the daily chart to look for resistance levels ahead of the target.  The first horizontal level of resistance dates to the lows from June 1st at 1.0627.  Above there, EUR/USD  can move to the 61.8% Fibonacci retracement level from the highs of the year to the lows of the year at 1.0747.  However, if resistance holds, the first level of support is at the 200 Day Moving Average and the previous resistance area between 1.0348 and 1.0368.  Below there, price can fall to the lows of November 30th at 1.0290 the lows from the bottom of the flag pattern on November 21st at 1.0226. 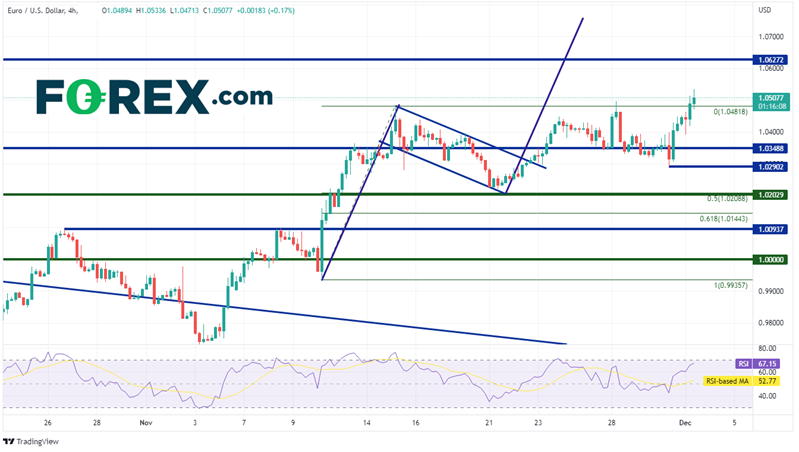 The FOMC will “only” hike rates by 50bps according to Fed Chairman Powell’s speech at the Brookings Institute on Wednesday.  This is partly due to the lower Core PCE print (which is the Feds favorite measure of inflation) on Thursday.  If Core PCE continues to fall over the coming months, the Fed may end up hiking rates less than it expects, or even cutting rates before the end of next year. This should put pressure on the US Dollar, which therefore, may cause EUR/USD to go bid.