Amazon acquisitions: what does Amazon own?

How did Amazon become the world’s largest e-commerce company?

Amazon started out of Jeff Bezos’s garage in Bellevue, Washington in 1994. It’s now one of the Big Five companies in the US information technology industry, along with Google, Apple, Microsoft, and Facebook.

When Amazon was launched, it sold books online but quickly expanded to sell everything from electronics and software, to food, toys, clothing and furniture. Amazon grew its revenue from $8.47 million in Q4 1996 to $16 million in Q1 1997. Despite this being considered a relatively small income, Amazon went public in 1997, at $18 per share. This gave the company a market value of about $438 million.

By 2015, Amazon had become the most valuable retailer in the US by market capitalisation – surpassing grocery store Walmart. As of July 2021, Amazon was the third-largest company in the world – behind Apple and Microsoft.

What companies does Amazon own?

Amazon owns more than 100 companies across a variety of market sectors – including tech, groceries, media and medicine. Many have attributed this vast empire of businesses to Amazon’s need-to-win mentality – if it can’t dominate the market on its own, it’ll just buy the market leader.

Amazon’s biggest acquisition was Whole Foods in 2017, which it acquired for $13.7 billion. It provided a brick-and-mortar retail space for Amazon, as well as insights into high street shoppers.

As Amazon owns so many companies, we’ll just take a look at the acquisition history of some of Amazon’s most famous acquisitions. 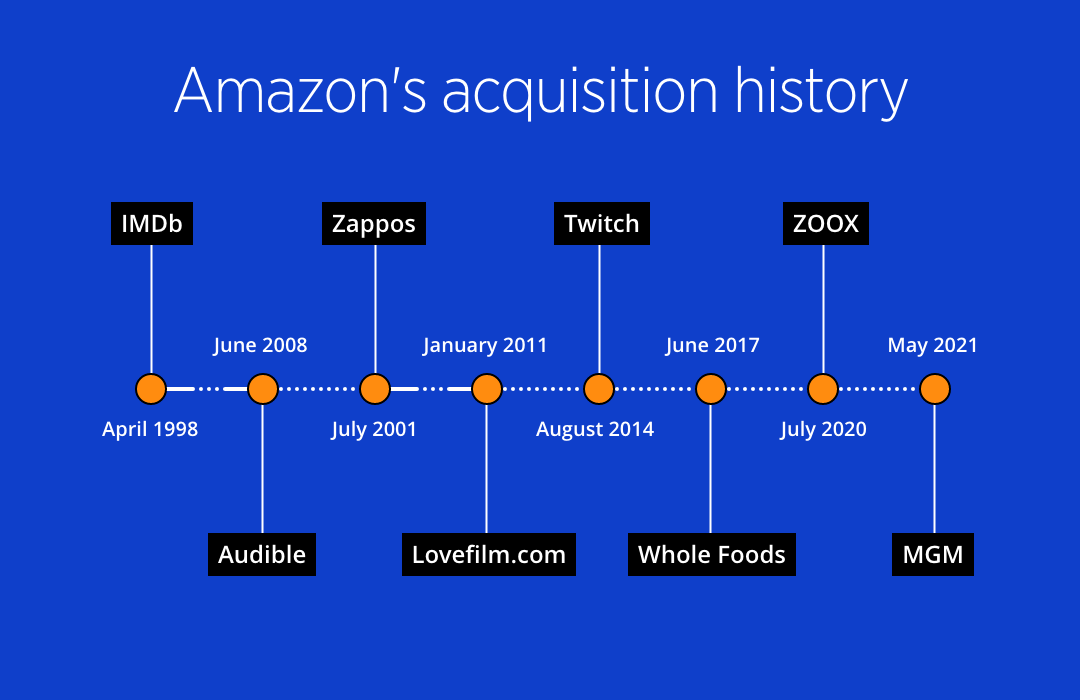 What companies does Jeff Bezos own?

Jeff Bezos owns a number of companies; naturally the most famous is Amazon. While he stepped down as CEO in Q3 2021, he’s still the largest single shareholder, with more than a 10% stake in the company.

One of the reasons cited for Bezos’s decision to vacate his position at Amazon was to focus on his other businesses. These include:

You can trade Amazon, and hundreds of other global shares with us in just four steps: