XPeng Q4 preview: Where next for XPeng stock?

When will XPeng release Q4 2021 earnings?

Chinese electric carmaker XPeng is scheduled to publish fourth quarter and full year earnings for 2021 before US markets open on Monday March 28.

XPeng shifted 98,155 vehicles during 2021 as a whole, some 263% more than the year before. Delivery numbers grew steadily throughout the year from around 6,000 in January to a new all-time record of 16,000 in December. Growth has been rapid considering it delivered more vehicles in the fourth quarter than it did in the entirety of 2020. Below is an outline of the company’s delivery figures during 2021 as well as the initial figures for 2022:

We have seen delivery numbers fall in early 2022, with just 6,225 cars delivered in February. However, that was mainly caused by the Zhaoqing plant being shutdown from late January until mid-February for the Chinese New Year holiday, during which the company completed an upgrade of the factory’s technology that XPeng has said will allow it to accelerate deliveries to fulfil the ‘significant order backlog’ carried over from 2021, implying delivery numbers should continue to climb to new highs this year. Other carmakers such as NIO also shut their plants and conducted work during the Chinese holiday.

Current consensus figures from Bloomberg suggest analysts believe XPeng can almost double output in 2022 and deliver 192,771 vehicles this year, demonstrating that markets believe the company can continue to deliver despite the tough environment for automakers.

Analysts forecast revenue will jump to RMB8,049.5 million in the fourth quarter of 2021 from RMB2,851.4 million the year before. That will be above the RMB7,100 to RMB7,500 million guidance range provided by XPeng after the company delivered significantly more vehicles in the period than it originally anticipated.

The net loss per American Depositary Share (ADS) is forecast to widen to RMB2.08 in the fourth quarter from the RMB0.53 loss posted the year before. XPeng is expected to remain in the red during 2022 as it continues to ramp-up investment and expand its retail store network.

R&D spending in the third quarter was double that of the year before and other costs have also risen as it scales up. Despite the hefty costs of building a sustainable electric vehicle business, XPeng has happily put money behind more adventurous ideas. The firm led the launch of a new $200 million investment fund this month that will invest in the electric vehicle market and ‘frontier technology’ startups and it also has money in its flying vehicle affiliate named HT Aero.

Notably, XPeng missed its target to end 2021 with 350 retail stores, having only managed to open 311 during the year (which rose to 333 at the end of January), but it has recently formed partnerships to facilitate sales channels in the Netherlands and Sweden, the latter of which is the home to XPeng’s first branded overseas retail store. That follows the launch of the P7 sedan in Norway last year and has been followed up by the recent launch of the lower-priced P5 in certain European markets.

Herbert Diess, the CEO of Volkswagen, which sold around 450,000 electric vehicles worldwide last year and counts China as a major market, said earlier this month that it regarded XPeng, as well as NIO, as ‘very serious competitors’. The German carmaker said their ability to scale up will be key to their level of success as he faced questions about intensifying competition in the region, with Tesla also having recently opened its own factory in Berlin to ramp-up deliveries across the continent.

XPeng’s vehicle margin has improved sequentially for at least seven consecutive quarters but this trend is set to come to an end by tightening to 11.9% in the fourth quarter from the record 13.6% posted in the third. This will be primarily driven by the growth in sales of its cheaper models such as the P5 sedan and the G3i compact SUV, resulting in lower selling prices and profits on each car.

Supply chain headwinds and the inflationary environment will also be in play as automakers scramble for chips and components and battle against rising costs of raw materials. The hope is that increased scale this year will make production more efficient and allow it to counter this, although XPeng has been among many automakers in China to have recently raised prices alongside Tesla, BYD and Li Auto. Meanwhile, NIO has pledged not to hike prices in the short-term as it is thought to be more resilient to rising costs thanks to its focus on battery-swapping, but it hasn’t ruled them out going forward given the current environment.

Notably, XPeng was the fifth largest Chinese electric vehicle company in terms of volumes in 2021, according to data from Electrek, coming in just ahead of NIO and Li Auto, but its margin is considerably lower than both rivals. Although NIO has seen its margin tighten it still stands at over 18% while Li Auto posted a margin of over 22% in the fourth quarter of 2021.

XPeng was the first electric vehicle company in Hong Kong to added to the Shenzhen-Hong Kong and Shanghai-Hong Kong Stock Connect programmes in February, which should bring more investors into the fold as it opens the door to people in mainland China to trade its shares. That also saw it become included in the Hang Seng TECH Index earlier this month. XPeng, which went public in New York in August 2020, launched its listing in Hong Kong in July 2021 and now has a dual primary listing in both cities.

XPeng shares have been pushing higher thanks to a broader rally in Chinese stocks following the intervention from the Chinese government last week, when it promised to draw a line under the regulatory crackdown on tech companies and support those with overseas listings, such as XPeng. That has removed some key regulatory pressure from the outlook, particularly the threat that it could have to abandon its US listing. However, Chinese authorities have already started to warn some Chinese firms with shares listed in the US to prepare for further auditing as a result.

XPeng shares began to freefall in December and eventually hit an 18-month low of $18 on March 14. However, the stock has since rebounded over 45% following the broader rally in Chinese stocks amid the government intervention.

The current uptrend is supported by the fact that the 5-day average volume at time is almost double the 100-day average. However, the stock has tried and failed to break much higher than $29 during the past three sessions in a sign that the trend is already running out of steam. A sustained break above here is needed to keep the uptrend intact before it can target the 50-day sma at $35 and then the 100-day at $40, in-line with the February-high. Considering much of the pressure on the stock has come from issues that the government has vowed to address means a swift recovery even higher is possible, with 20 brokers believing XPeng shares can almost double in the next 12 months to over $55.

If the uptrend fails to gain momentum and the stock starts to head lower again, we could see it drift initially to $23, representing the March 11 close before it gapped lower. The fact the sharp reversal pushed the RSI out of oversold territory supports the view that $18 should act as the ultimate floor for the stock. 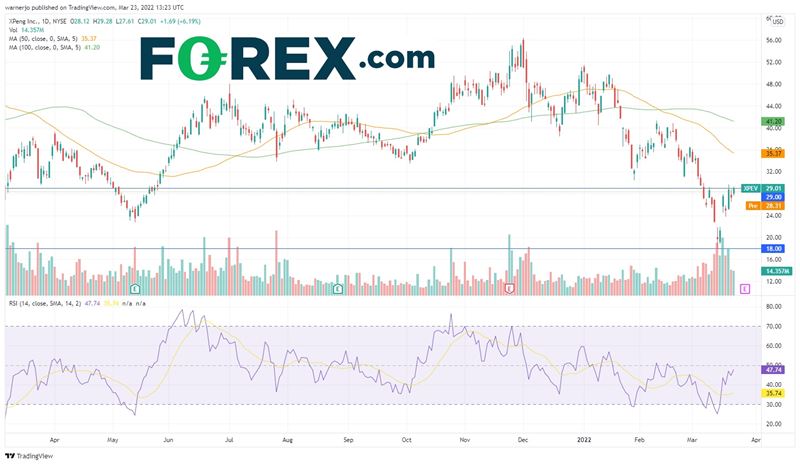