Share TradingWhile a few companies’ results have been trickling in already, Q4 earnings season kicks off in earnest starting on Friday, when the major US banks start to report. As the repository for excess cash and the go-to place for new loans, banks serve as a bellwether for the “Main Street” economy as a whole.

Though the start of Q4 marked a time of (relative) optimism for the US economy, that confidence was quickly reined in as the resurgence of COVID-19 led to additional restrictions on economic activity. In other words, everyone knows earnings for most US companies will decline this quarter relative to last year. According to IBES data from Refinitiv, aggregate earnings for the S&P 500 are expected to drop -9.8% in Q4, with some banks expected to see profits crater by up to -40% from last year.

For this reason, traders will be most interested in the guidance from the US banks and what company executives are saying about the prospects for 2021 overall. With analysts forecasting a sharp pickup in growth as highly-effective COVID-19 vaccines roll out across the globe, traders will want to hear corresponding optimism from top US bankers.

Banking is a highly anticipatory business, and not surprisingly, major US banks spent much of 2020 anticipating that many of the loans they’d made in recent years could result in losses based on the sharp downturn in economic growth. With the worst-case scenario (multiple years of subdued business activity while waiting for a vaccine) now off the table, bankers may start to release some these provisions. Jamie Dimon, JP Morgan’s CEO and arguably the doyen of US banking, recently noted that banks had booked too many of these reserves if the credit cycle normalizes from here.

Basically, after proactively taking losses on fears of a protracted global recession earlier in 2020, banks may now start to reverse those losses and re-realize profits on previous loans.

After banning stock buybacks and capping dividends for banks in June, the Federal Reserve surprised investors by announcing that US banks could once again start repurchasing shares. This means that banks can resume returning billions in capital to shareholders, and in turn, boosting earnings per share. According to some analysts, US banks may buy back up to $10B of shares in the first quarter alone with some banks expected to buy back up to 15% of their outstanding shares over the next two years: 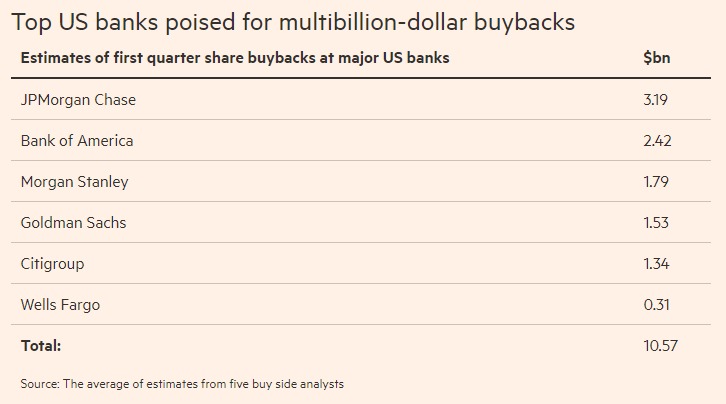 If these figures come in at or above expectations, it would signal confidence in the US economy and could further boost the stock prices of shareholder-friendly banks.

Four US Banks in Focus

JPMorgan Chase remains the “best in breed” of the US banks, with a strong balance sheet, the largest asset base, and the biggest market capitalization of all US banks. Unsurprisingly, the company wasted no time in announcing a $30B buyback program over multiple years immediately when the Fed gave its blessing back in December. JPM’s lending business likely improved in Q4, but the standout may be in the company’s trading division, which saw revenue surge by 30% in Q3 and should extend its run of strong performance in Q4 based on the bullish stock market. 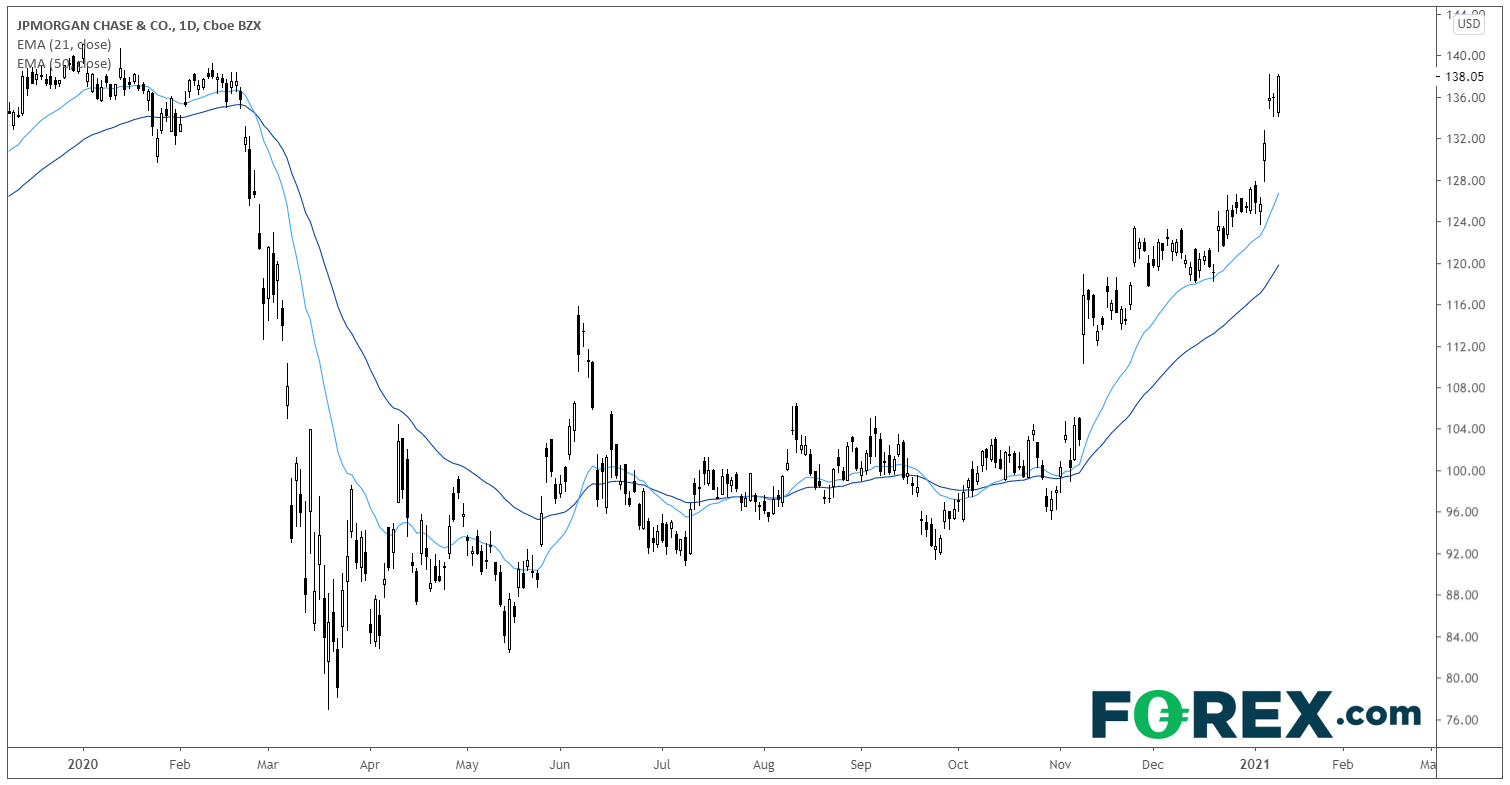 If JP Morgan is the standout among massive US banks, Wells Fargo has become the black sheep. The firm continues to grind through a restructuring program following account opening scams in recent years and is unlikely to commit to the massive share repurchases that other banks will. That said, WFC has the biggest mortgage division of the major banks, and the combination of record low interest rates and a surging housing market may have boosted this key division. With stock price performance lagging all of its major rivals since the onset of the pandemic, WFC bulls could certainly use some good news! 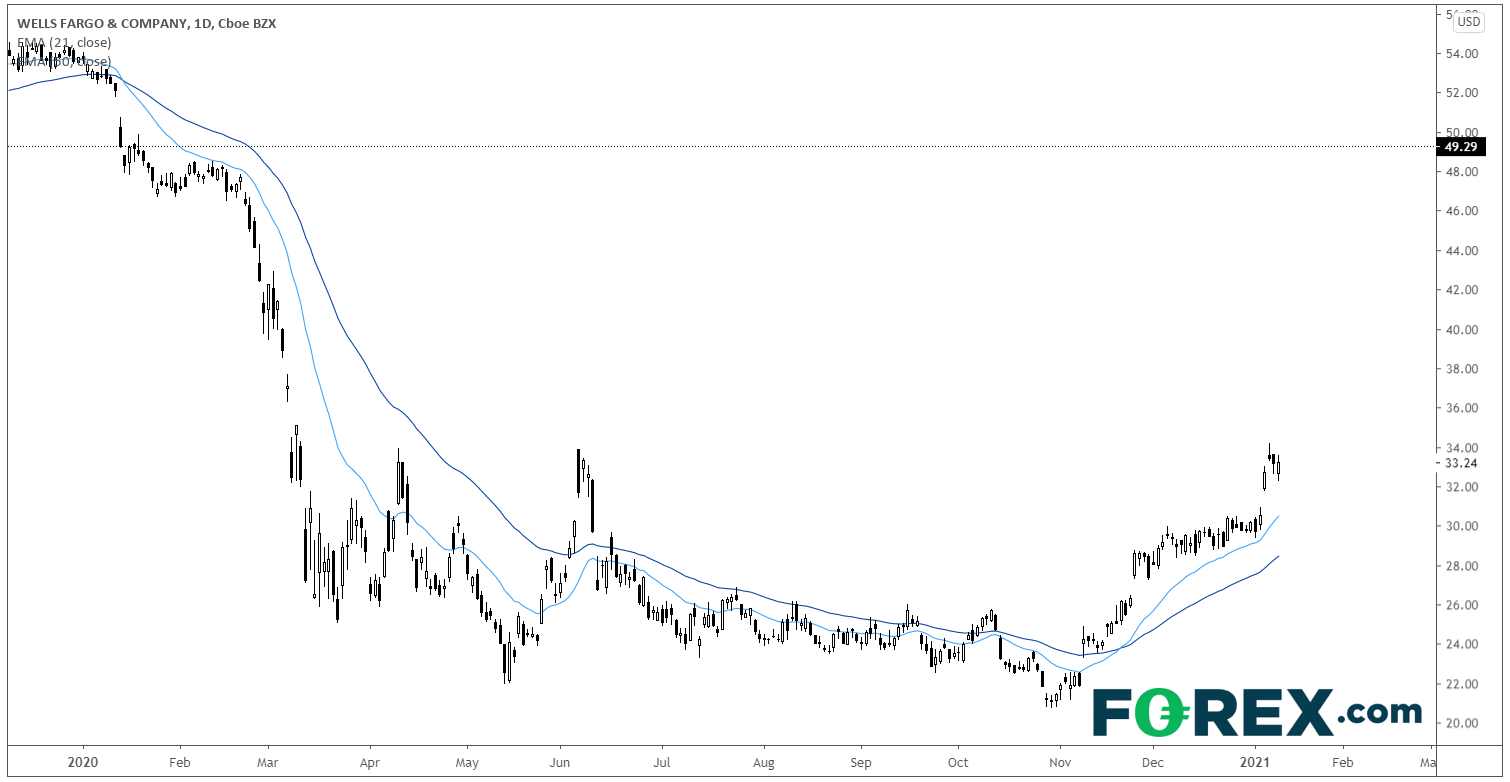 Citigroup is expected to see the largest decline in Q4 earnings relative to last year, with analysts expecting a staggering -42% profit decline. On the bright side, these profit estimates have been revised up by nearly 10% in the last 30 days, and the company has recorded some of the largest loan loss provisions in recent quarters, setting the stage for a potentially strong report if those projected losses are reversed. In any event, it’s clear that traders are already looking ahead to brighter days in 2021, with the stock up an impressive 87% from its March lows. 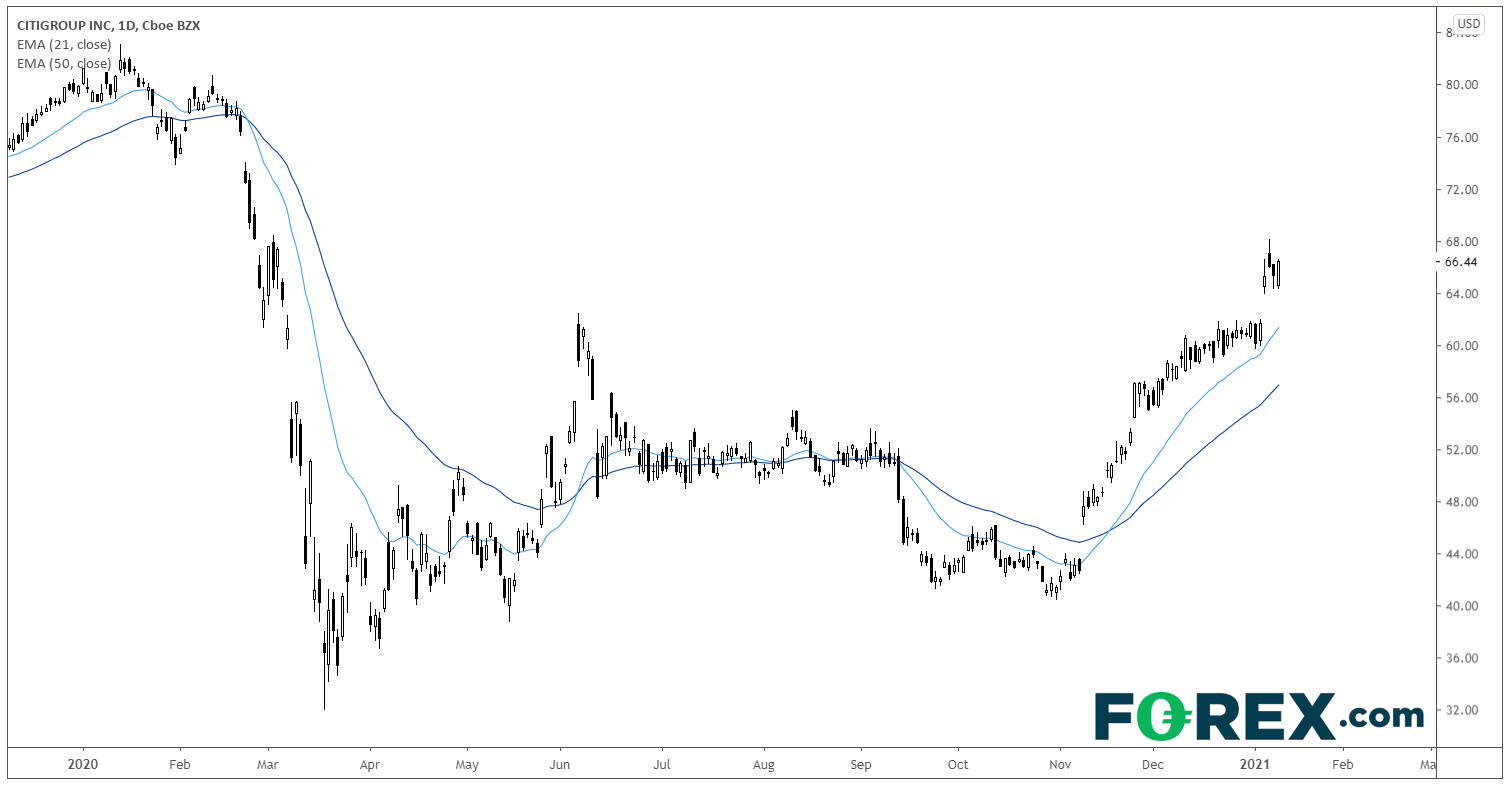 For traders looking to place bets on an economic recovery, Bank of America may be the most levered of the major banks to a “return to normal” in 2021. Furthermore, the stock may have further to run with only about 50% of analysts putting a “buy” rating on the stock, compared to nearly 70% for JPMorgan and 80% for Citigroup. The stock trails just behind Citigroup for the strongest recovery, with shares trading up 83% from the pandemic low as of writing. 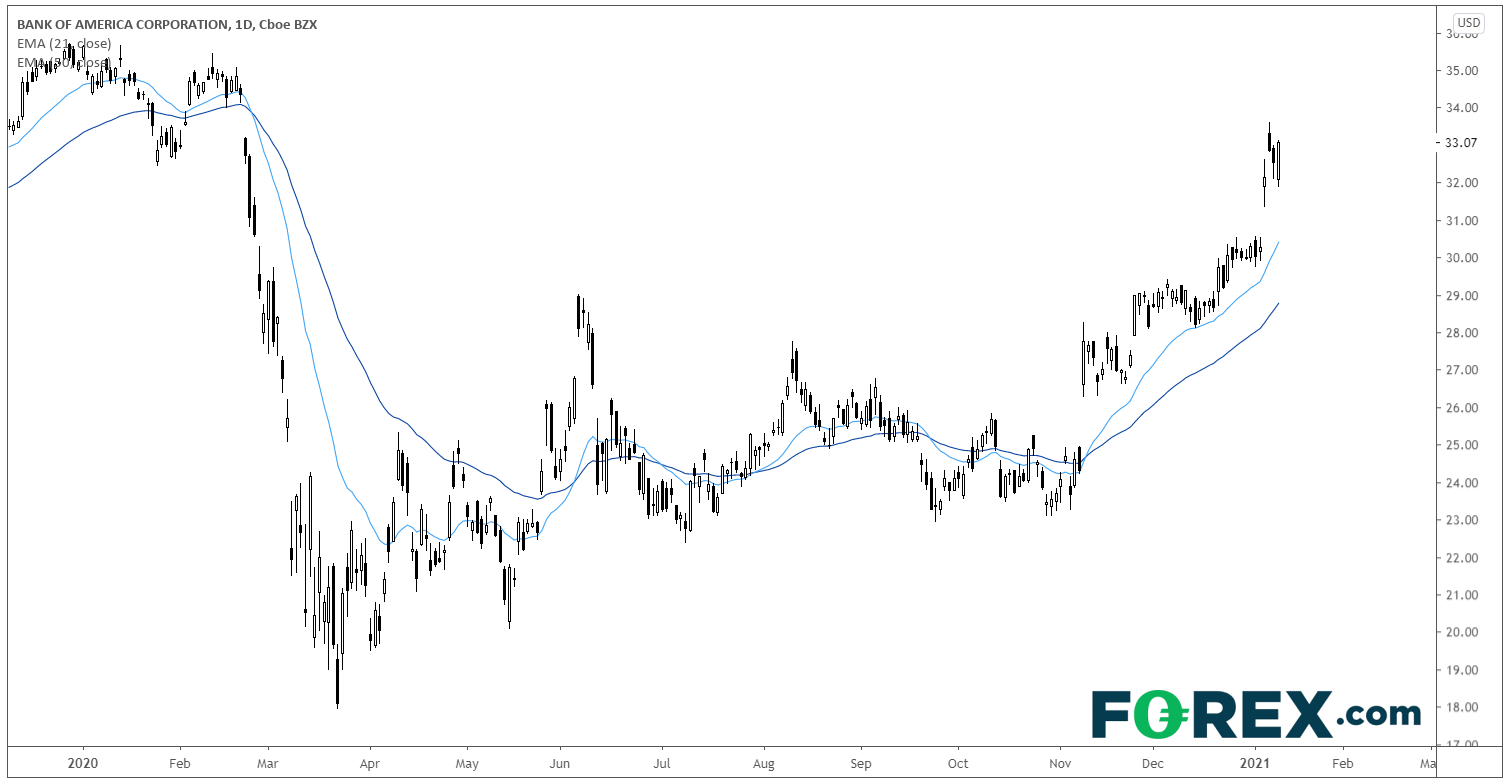