Deliveroo 2021 preview: Where next for the Deliveroo share price?

When will Deliveroo release 2021 earnings?

Deliveroo is scheduled to release full year 2021 results on the morning of Thursday March 17.

Deliveroo has been a big disappointment since listing in London early last year. Having gone public at 390p per share, the stock tanked on its first day of trading and it took five months for it to briefly reach its IPO price before its shares spiralled lower again. Today, the stock trades closer to 110p, just above the all-time lows it hit earlier this month.

The initial reasoning behind the poor performance of its share price was that it set its IPO valuation too high. It then briefly recovered as it became clear the explosion in demand seen during lockdown was set to continue even as restrictions eased. But the steep tumble seen over the last six months has been fuelled by a combination of investors exiting out of stay-at-home stocks, a broader selloff in tech stocks, growing competition in the delivery space, and concerns over the economy.

Analysts at Barclays said last week that it liked many parts of Deliveroo’s model, citing the potential for growth in grocery deliveries, its subscription service, strong market fundamentals and an incentivised founder-led team, but said ‘concept stocks’ need to provide ‘clear catalysts’ in order to find higher ground.

One area being closely watched is M&A as consolidation remains a key theme throughout the industry as players race to scale-up and expand. Fortune reported last week that DoorDash, the largest player in the US, considered making a takeover bid for Deliveroo but said the pair couldn’t agree terms, prompting it to buy Finnish startup Wolt Enterprises last November instead. The fact Deliveroo’s valuation has slumped will only make it more attractive to any potential suitors. Although M&A could provide the catalyst needed to boost its valuation, the ability to secure a satisfactory premium only gets harder the lower its share price falls.

Still, there are reasons to believe the selloff in Deliveroo shares has been overdone. The company is currently valued at just under £2 billion and it is expected to have around £1.3 billion of cash in the bank at the end of 2021. Its valuation is broadly equal to Deliveroo’s annual sales last year. And brokers currently believe the share price can more than double over the next 12 months with an average target price of 280p.

We already know that Gross Transaction Value (GTV) soared 67% in 2021 to £6.63 billion as demand for food deliveries remains elevated after surging in popularity during the pandemic.

That was at the top end of its 60% to 70% guidance range (which in turn was raised from an original 50% to 60% target at the start of the year). That was the result of a 73% jump in order numbers offsetting a mild 4% fall in the average amount spent per order as prices normalise and continue to return to pre-pandemic levels.

Deliveroo’s UK arm grew orders by 72% and posted 71% growth in GTV, while its international division reported order growth of 74% and saw GTV rise 62%.

Notably, order numbers were some 154% above 2019 levels in the fourth quarter of 2021, demonstrating how the company is continuing to benefit from the pandemic-induced boom in demand even as restrictions ease. In fact, the number of consumers using its app on a monthly basis hit a record high of 8.0 million in the final three months of 2021, while the average numbers of orders placed per month also hit a record of 3.4. A year earlier, it had fewer than 6 million monthly users that placed, on average, 3.2 orders a month.

The adjusted Ebitda loss is expected to swell to £157.5 million in the year from £11.8 million the year before. The pretax loss at the bottom-line is expected to follow and widen to £257.4 million from £225.5 million.

If Deliveroo can meet expectations this week it will have grown at a faster pace than its larger London-listed rival Just Eat Takeaway.com, which reported a 33% rise in annual revenue in 2021 to EUR5.3 billion and sank to an adjusted Ebitda loss of EUR350 million – stating this was the peak year of losses. Notably, Deliveroo continues to grow order numbers at a faster pace in the UK & Ireland than its rival.

The initial outlook for 2022 will be closely-watched. Analysts currently believe Deliveroo can grow GTV by 21% this year, suggesting it will continue to gain ground on Just Eat Takeaway.com, which said it is expecting GTV to grow by a mid-teens percentage in 2022. The concern going forward is that the inflationary environment could prompt people to cut back on spending on non-essentials, like takeaways, as rising costs crimp people’s purse-strings. That comes at a time when both the business and its riders are facing higher costs for the likes of fuel, which could squeeze margins or lead to higher prices for consumers.

Deliveroo shares have plunged over 70% in value since peaking at all-time highs just over six months ago and they continue to languish near the all-time low of 106.8p hit earlier this month. That has acted as a floor for the stock over the past two weeks that must hold to avoid opening the doors to unknown territory and fresh lows for the stock. Average volumes have increased since the stock hit its all-time low, supporting the view that it can hold.

A move above the March closing-high of 119.3p could install confidence that the stock can find higher ground, but the first firm upside target it needs to recapture is the 144.0p level of resistance seen in mid-February. 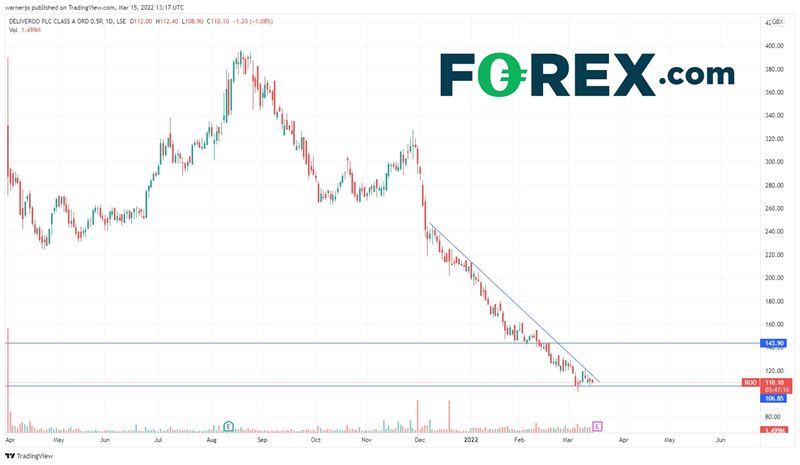 How to trade Deliveroo shares