Wall Street closed notably lower last week with tech stocks falling around -4.5% during its worst week since late October. A hawkish Fed and expectations for hikes to arrive from the US sooner than later weighed on sentiment for equity investors, with bearish engulfing candles forming on the S&P 500 and Nasdaq 100. Yet, from a technical perspective, there is hope that selling pressure could subside over the near-term. The S&P 500 fell just -0.4% last week and is trying to hold around the monthly pivot point, whilst the Nasdaq’s decline stalled just above the December low. 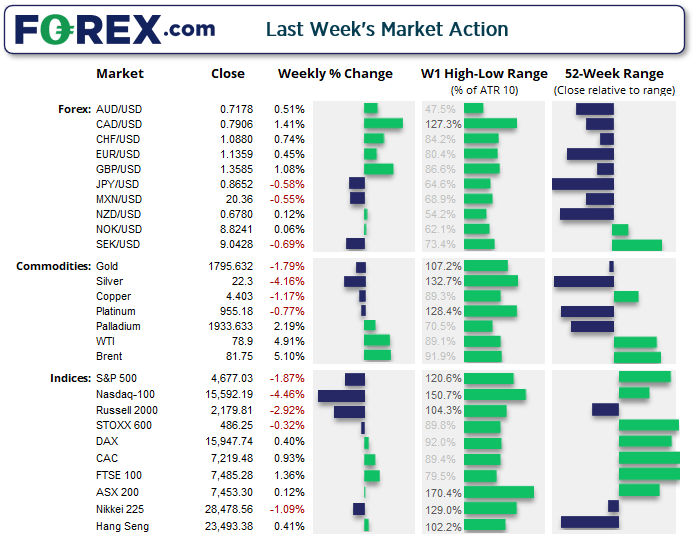 The ASX 200 couldn’t quite retest its record high last week, stopping just 11 points below it on Wednesday before rolling over on Thursday. It also closed effectively flat after a choppy week’s trade to form a wide-legged Doji on the weekly chart. We could find directional trading to be a flip of a coin until momentum shows more dedication towards a particular direction, which is why we currently hold a neutral view on the index.

The US dollar handed back most of the week’s gains on Friday following another underwhelming Nonfarm payroll report. The US economy added just 199k and undershot expectations of a 400k print, although November’s print was upgraded to 249k from 210k and unemployment fell to 3.9% (it’s lowest post-pandemic rate).

The US dollar index printed an inverted pinbar on the weekly chart. In isolation, we cannot tell if it is a bullish or bearish candle, but we note that bulls have struggled to regain control since November and price action is meandering around 96.0 as it tried to make its way back to its bullish trendline. We’d be interested in dips towards the 95 area for potential longs once its current corrective phase has completed.

The British pound was the only major to close higher against the dollar last week despite softer data hitting screens as Omicron continues to spread. The weekly COT report suggests short-covering is playing a part overall.

AUD and NZD were the weakest majors last week as Fed minutes revealed the central bank to be more hawkish than previously thoughts. Yet the relative performance between the two has seen AUD/NZD roll over as Australia (arguably) experience their first ‘real’ coronavirus wave, with the nation since reporting new 100k daily cases for their first time over the weekend. 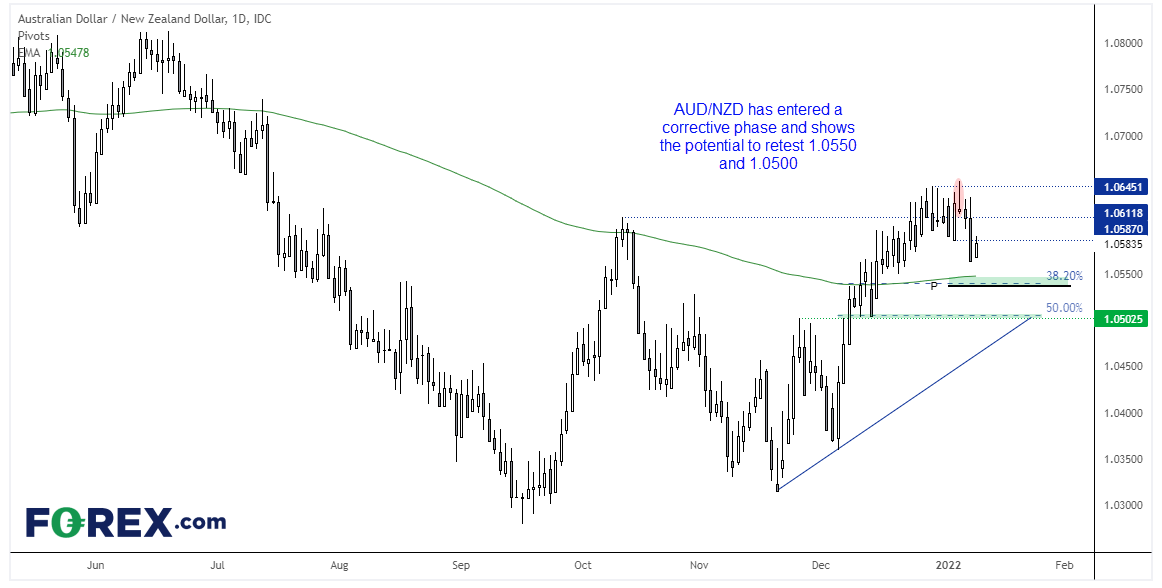 A bearish engulfing week formed last week to take prices back below 1.0600 and the October high, during its most bearish week in five. We can see on the daily chart that a new cycle low formed on Friday, although prices have retraced into resistance during early Asian trade. The market is seemingly within a corrective phase and we have a near-term downside target of around 1.0537 – 1.0550 where the monthly pivot point, 38.2% Fibonacci level and 200-day eMA reside. A break beneath this zone exposes the 1.0500 handle near the 50% retracement level and bullish trendline.

Oil rises 5% in its first week of trade

Geopolitical concerns provided a tailwind for oil prices last week, despite demand concerns from the omicron variant and the prospects of higher interest rates. Unrest in Kazakhstan and damages to oil pipelines in Libya are weighing on supply and helped WTI and Brent rise to a near 2-month high on Friday.

Some metals did not fare as well, with gold and silver printed bearish engulfing candles by Friday’s close. Gold managed to recoup 0.4% on Friday thanks to a weak NFP print yet finished the week down around -1.7% to silver’s 4.1% fall. 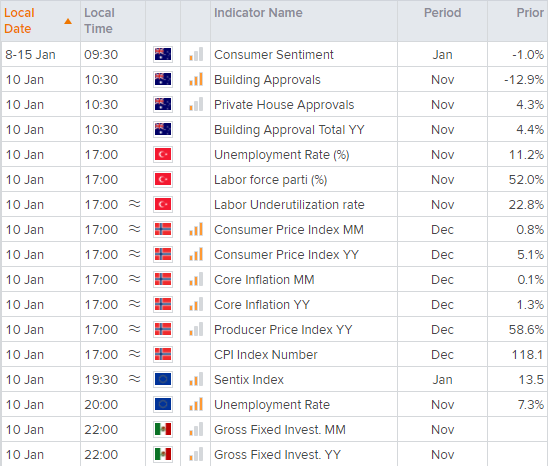