The Bank of Canada hiked rates by 75bps to 3.25%, as expected.  In addition, the statement noted that “given the outlook for inflation, the Governing Council still judges that the policy interest rate will need to rise further.”  How much higher will they raise rates?  The BOC said that it will depend on the effects of tighter monetary policy as it works its way through the economy, but that it is committed “to price stability and will continue to take action as required to achieve the 2% inflation target”.  The BOC also noted that it will continue with its quantitative tightening program.  At the same time as the BOC announcement, Canada released its Ivey PMI for August.  The seasonally adjusted print was 60.9 vs an expectation of 48.8 and a prior reading of 48.6, below the expansion/contraction level of 50! August’s print was a huge jump for the manufacturing PMI and indicates that the economy is still strong despite higher rates.

As the rate hike was in-line with expectations and the statement seems to lack new information, USD/CAD has been fairly quiet since the announcement.  As mentioned in out Bank of Canada preview, USD/CAD had been in a rising channel since early April.  After trading to a local high of  1.3224 on July 14th, the pair pulled back to the other side of the channel near 1.2728.  Since then, USD/CAD has been on a tear and today reached its highest level since that July 14th high at 1.3208. 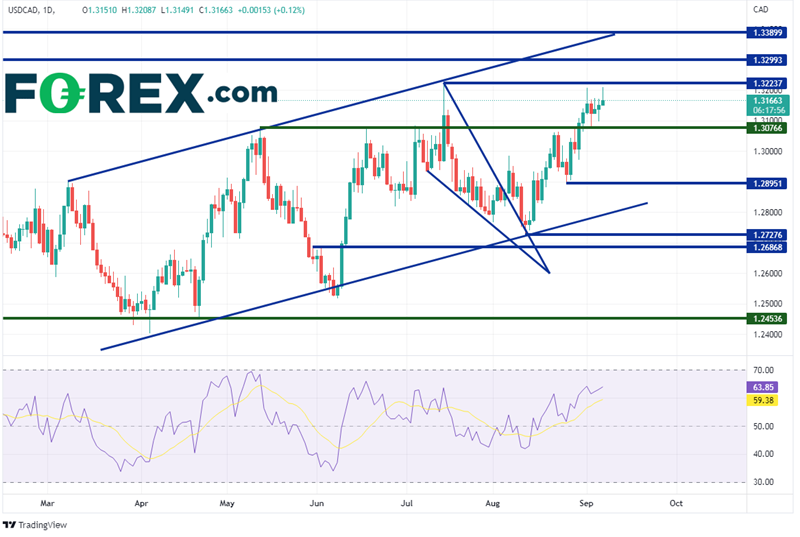 On a 240-minute timeframe, first resistance is very close to today’s high at 1.3234.  Above there, price can move to horizontal resistance from the November 4th, 2020 high at 1.3299 and then the top, upward sloping trendline of the channel near 1.3375.  However, if USD/CAD moves lower, the first support is at long-term horizontal support of 1.3077 and then the lows of August 25th at 1.2895.  If price breaks below there, the next support level is the bottom, upward sloping trendline of the channel near 1.2790. 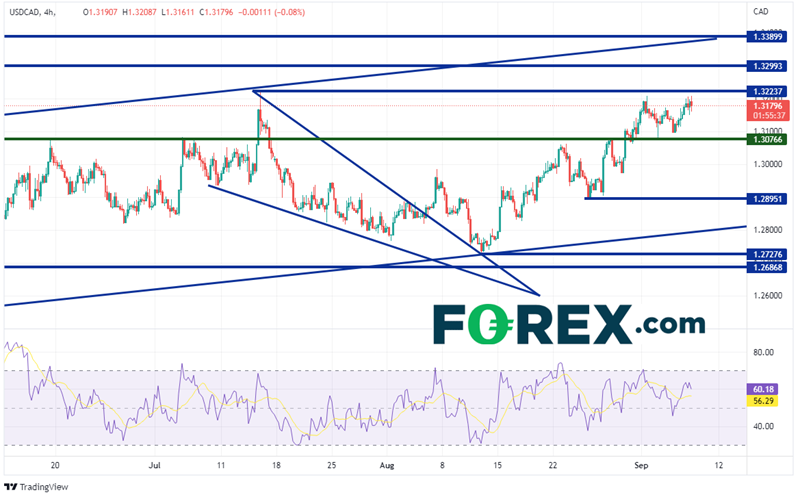 Will USD/CAD continue to move higher even with a 75bps hike today and the BOC noting that there is more rate increases to come?  It may depend on the next catalyst.  Canada reports its Employment Change on Friday.  Expectations are for a small increase of 15,000 vs a terrible print from June at -30,600. A weaker print could push the pair higher.