Indeed, since the central bank’s last meeting, on July 13, incoming data from Canada has generally deteriorated, with employment unexpectedly falling by 31,200 in July, building permits declining by 5.5%, retail sales dipping 0.8% and CPI slipping by 0.2% month-over-month. There has only been a handful of stronger figures. These include a jump in the Ivey PMI, a 0.7% month-over-month increase in wholesale sales and a 0.6% rise in monthly GDP. Meanwhile crude oil prices have turned rather volatile, but are near the levels they were when the BOC made its last decision. Then, the Bank’s Governing Council judged that the overall balance of risks remained “within the zone for which the current stance of monetary policy is appropriate” and so it decided to keep rates unchanged at 0.5%, a decision which caused the Canadian dollar to rise on the next couple of days.

But crucially, the BOC will not have the latest employment data for August when it makes its decision today, with the employment report scheduled to be released a week later than usual on Friday (due to the Labor Day holiday). Therefore, it is unlikely that the central bank will make any changes to interest rates at this particular meeting and it will probably try to be as neutral as possible in choosing the words for the policy statement. Indeed, with economic conditions in Canada’s southern border, the US, turning weaker once again, the BOC will almost certainly try to avoid making any significantly hawkish impressions. And if it removes the “current stance of monetary policy is appropriate” line from the statement then the Canadian dollar’s response will probably be negative as traders prepare for another rate cut at some point down the line.

However if the BOC statement turns out to be more hawkish than dovish then the CAD could outperform especially against weaker currencies like the euro.

With the New Zealand dollar outperforming in recent days, the NZD/CAD could be the one to watch, especially, but not necessarily, in the event that the BOC turns out to be more dovish. The cross is currently testing a major resistance level on its long-term charts around 0.9570-0.9655 area. This level marks the neckline of the long-term inverse Head and Shoulders continuation pattern. The NZD/CAD has already made several attempts at trying to break through this area in the past, including at least 4 attempts since July. But so far, the bulls have lacked the desired conviction. That being said, the pressure appears to be building beneath the surface: the rejections of breakout attempts have progressively been shallower recently. This points to a potential breakout soon, which, if seen, could be very significant in terms of magnitude given the amount of time price has spent below this region.

However, breakout attempts have been failing left, right and centre in the FX markets in recent times. This could well turn out to be another such example.  Not only could the BOC say something hawkish, crude oil prices may start to move sharply higher again soon. In fact, the moves from false breakouts tend to be much more vicious than breakouts. So, there could be an even bigger opportunity for the bears to pounce on this pair at this key resistance zone.

In summary, we view the risks as being equally balanced at this stage in terms of the NZD/CAD’s next big move. In the very short-term outlook, the Bank of Canada’s policy decision and the volatility in crude oil prices will likely have a big impact on the direction of the NZD/CAD pair. Conservative traders may therefore wish to zoom in on their lower time frame charts and wait for the NZD/CAD to decide on a direction before potentially taking a view on the same direction, without forgetting their usual risk and money management basics. 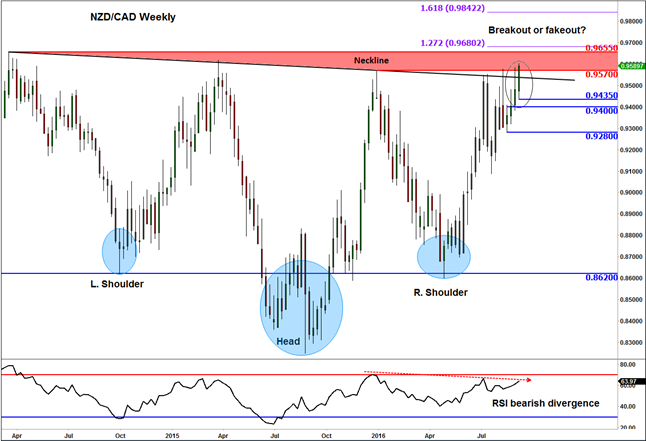