Could the Non-Farm Payrolls print be…….BAD?

I know.  I shouldn’t even be thinking it.  The possibility of getting a low NFP print, much less a negative print, is unfathomable.  But the markets seem to be pricing in the possibility that If Friday’s jobs report is bad, the Fed will “pivot” and slow the pace of rate hikes moving forward.  Giving the markets further hope that the Fed may pivot is that the RBA hiked rates by only 25bps when the markets were expecting a 50bps hike.  (The RBNZ will be closely watch later.  50bps is expected).

Back to the NFP report.  Taking inventory of some of the recent and upcoming jobs data:

If the jobs this week continues to come out poorly, stocks may continue to rise as the US Dollar continues to sell off.  However, if the NFP print comes out as expected or better than expected (+250,000), the markets could reverse quickly and retrace some of the extreme moves over the last few days.

EUR/USD is one of the currency pairs that has benefited from the prospect of a Fed pivot. It was just Wednesday of last week that the pair made a 20-year low at 0.9536. Just 5 trading days later, EUR/USD has traded as high as 0.99995.  However, the pair is up against psychological resistance at 1.0000. 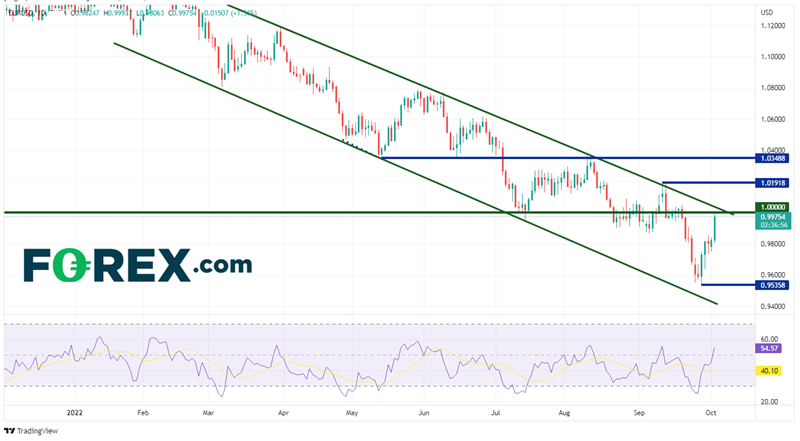 On a 240-minute timeframe, if EUR/USD does continue to move higher above parity (i.e. jobs data is worse), the next resistance is the top trendline from the long-term channel near 1.0050.  Above there, EUR/USD can move to the highs of September 12th near 1.0192 and then an area of strong resistance near 1.0345/1.0360.  However, notice the RSI is in overbought territory.  If the resistance holds (i.e. jobs data is better), the first support level is the September 30th highs at 0.9853.  Below there, EUR/USD can fall back to the recent lows at 0.9536, then the bottom trendline of the longer-term channel near 0.9415.

If the jobs report is better than expected, there’s a chance that the market will reverse some of the Fed “pivot” that it has been pricing in, and stocks and EUR/USD could move lower.  However, if the NFP print is weaker than expected, there will be a lot of talk about the pivot and markets may see the current trends in stocks and the US Dollar continue!

View more
Mexico CPI lower, however Core CPI still on the rise
Dow: Bright start may not hold for US stocks
US open: Stocks edge higher in cautious trade
Reddit stocks: what meme stocks are trending?
Two trades to watch: EUR/USD, FTSE
Markets on the edge

Dow: Bright start may not hold for US stocks
By:
Fawad Razaqzada

Markets on the edge
By:
Fawad Razaqzada