The sharp rebound in oil prices from the middle of January proved to be short-lived as we and many other analysts had expected. Oil prices are now down for the fourth day and second consecutive week. A barrel of WTI crude oil costs less than 30 dollars again, while Brent costs less than $33, at the time of this writing. Oil traders have been discouraged by the lack of any breakthrough in talks between some OPEC and non-OPEC producers. As a result, the probability of coordinated output cuts and tolerance of bullish speculators have both decreased. The latest positioning data from the ICE – which shows bullish bets on Brent rose by a sharp 31,309 contracts in the week to 2nd February, perhaps in anticipation of a deal between Saudi and Russia – suggests there is a big risk for position squaring from these group of market participants, especially if it becomes obvious that there won’t be any production cuts. This could exert further downward pressure on prices in the short-term.  And judging by the behaviour of oil prices this week, this is exactly how it is looking like at the moment.

But most of the bad news is already in the price and witnessing further big nominal price drops could soon become a thing of the past for oil, probably not before one final leg lower. I would imagine a growing number of people are beginning to feel more confident that US oil production is going to fall noticeably soon, perhaps around the middle of the year. This is suggested for example by the consistent falls in the oil rig counts which fell by a further 31 rigs last week, according to data from Baker Hughes. Not only was this the seventh consecutive weekly decline, it was the most pronounced since April 2015. At just 467 active rigs, drilling activity is now at its lowest level since March 2010 having dropped by about 70% since the start of 2015. Likewise, the Drilling Productivity Report from the US Energy Information Administration (EIA), which was released yesterday, points to a sharp decline in shale oil production in March.

With markets being forward-looking, I think any piece of ‘good’ news will now likely provide a bigger positive impact than bad news would negative on prices. Indeed, oil prices, although lower, haven’t exactly fallen off a cliff after the International Energy Agency (IEA) again raised its estimate of global oil surplus this morning.  The IEA now envisages that supply may exceed demand by an average of 1.75 million barrels a day in the first half of this year, compared with an estimate of 1.5 million last month. The IEA, like many other forecasters, think that the excess could grow if output from the OPEC increases further, a probable outcome given that Iran is now in the process of making a full return to oil the market. Iraq’s oil output hit a record 4.35 million barrels per day in January, up by 50,000 bpd, according to the IEA. Saudi’s oil output also increased further. The bigger members of the cartel are therefore continuing to produce more oil than required at the moment, increasing the pressure on the weaker members and shale producers.

Oil traders are now looking forward to the latest monthly oil report from the EIA, which is due for release later today. Then, the American Petroleum Institute (API), an industry group, will provide its usual data on US crude oil inventories tonight, with the official stockpiles data from the EIA set for publication tomorrow. If these numbers show a surprise, i.e. a sharp drawdown in inventories, oil prices are likely to rebound strongly. Conversely, a bigger-than-expected build would most likely cause prices to drop.

So, prices may well fall further in short-term, but all it takes is a big trade to trigger buying momentum again and at around $30 a barrel, WTI is undoubtedly looking attractive for some speculators, especially those who missed out on the bounce in mid-January. That being said, the trend is still clearly bearish and so far there is little technical evidence to suggest a bottom has been established. But prices could be very close to a bottom nonetheless. Below $30, the next key level for WTI is the January low around $27.50/5 then there is little further support until the next psychological level of $25.00. Likewise, Brent is stuck inside a bearish channel and for that reason there is no reason to feel bullish about oil prices in the short-term. Below next support at $32.25, the $30.00 handle could be the next bearish target, followed by January low at just above $27.00. For both contracts, a break above their recent range highs of $34.50 (WTI) and $36.00 (Brent) is required to turn the short term outlook to bullish. 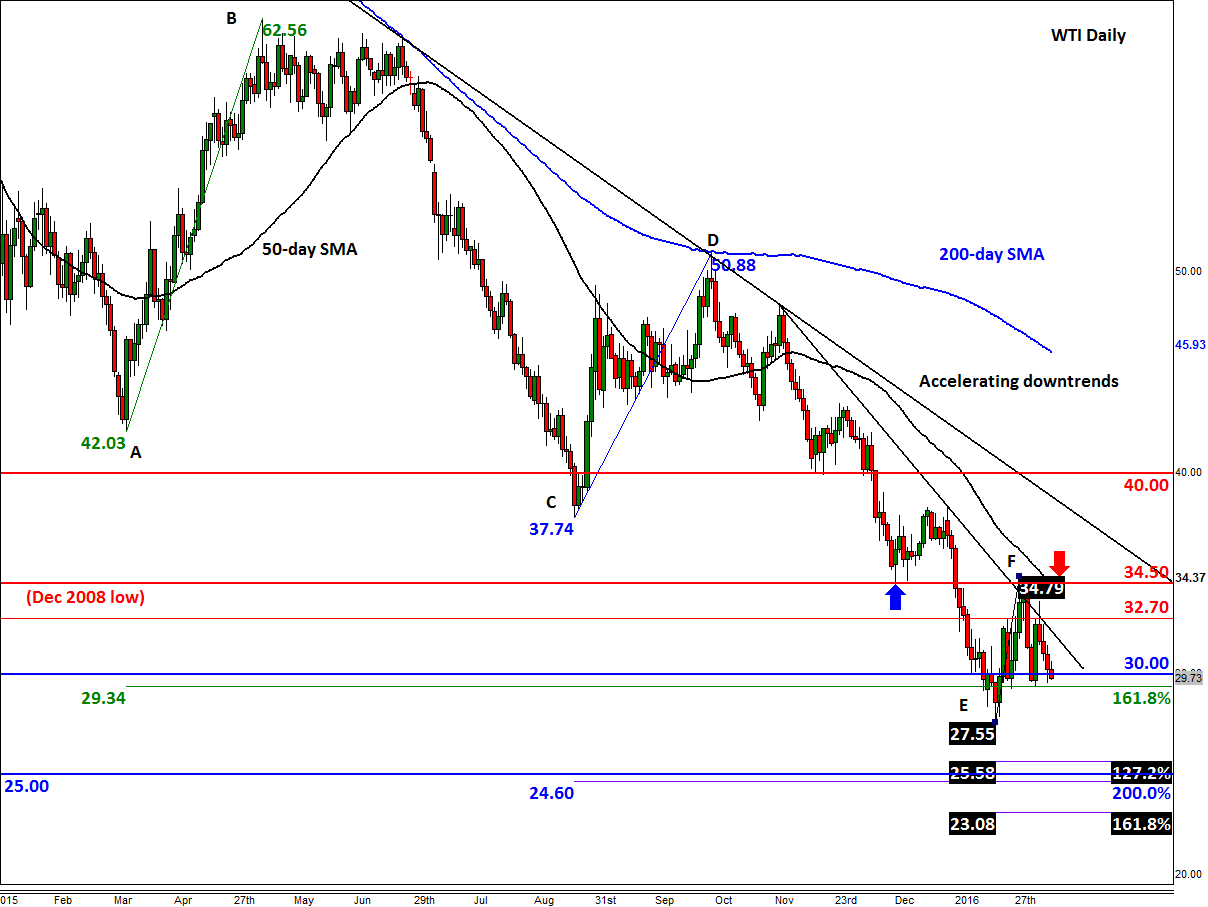 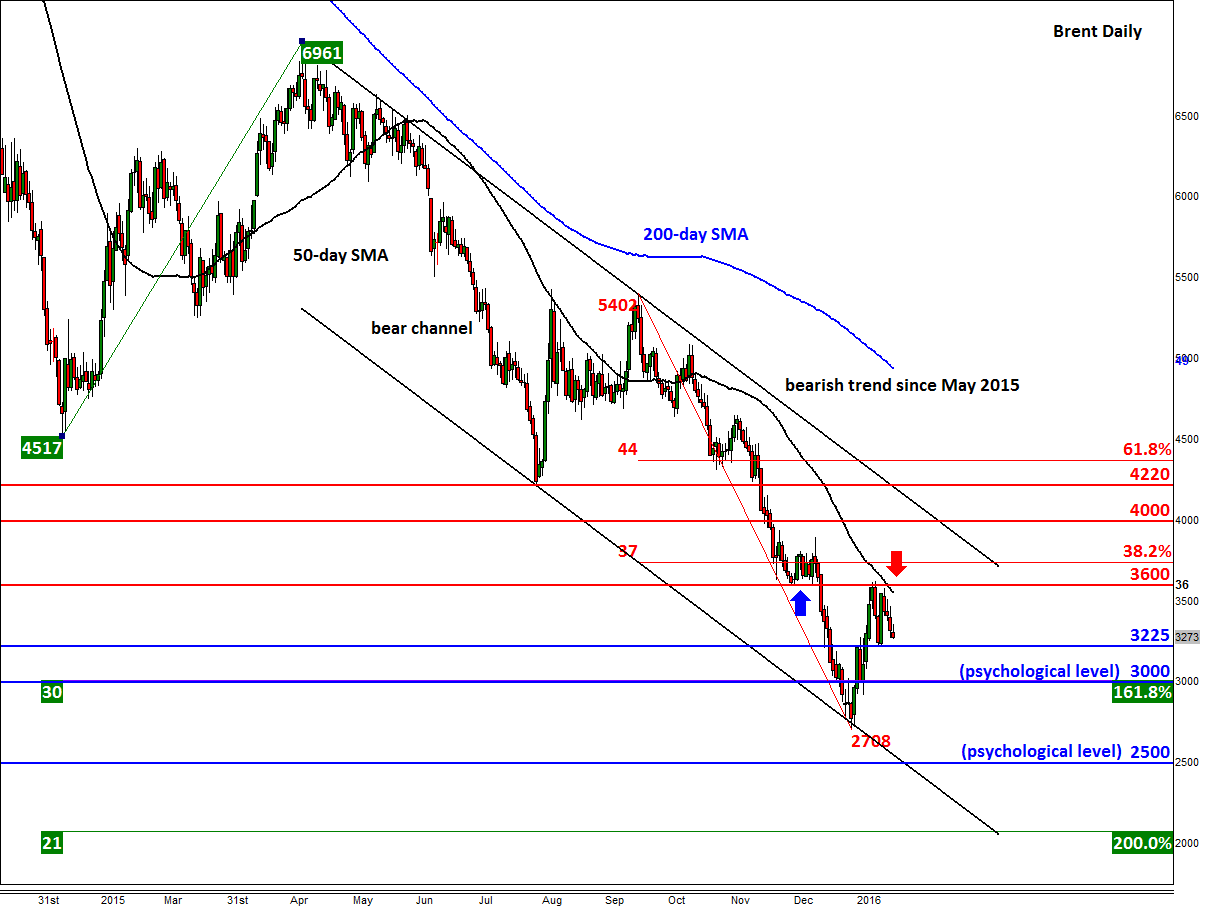