The crude oil volatility has been extremely high of late, with prices taking double digit percentage swings almost on a daily basis. Apart from the exceptionally high uncertainty in the oil market, the other reason for this is of course that at these low prices, small nominal moves do tend to exaggerate the percentage changes. In any event, volatility is likely to remain high for the foreseeable future. It appears as though both Iran and Iraq support the idea of some OPEC and non-OPEC members freezing their oil production at January levels – and why wouldn’t they? But neither has made it clear if they will also curb their output. If these important OPEC members do not make a commitment then there is a danger that the whole agreement will fall apart. But in any event, it is important to remember that oil production will be frozen at or near record high levels. For that reason, if the oil price is going to make a serious comeback, either demand growth has to improve remarkably or US shale oil output falls substantially. While the former looks unlikely, the latter is definitely more probable given, for example, the consistent sharp falls in the rig counts. With lots of oil companies elsewhere also cutting back on CAPEX, the oil market should rebalance itself at some stage in the second part of 2016.

But in the near-term, the on-going talks between the OPEC and non-OPEC should continue to provide direction for oil prices. Today’s focus will also be on the latest inventories data from the US Energy Information Administration (EIA), due for publication at 16:00 GMT (11:00 ET). While analysts expect to see another build of around 3.2 million barrels, the American Petroleum Institute (API), an industry group, reported a surprise drawdown last night. According to the API, stockpiles fell by 3.3 million barrels to 499.1 million in the week to February 12. Crude stocks at the Cushing also fell, down 175,000 barrels. If the API’s figures are confirmed or bettered by the EIA data, WTI could extend its rally later this afternoon.

We have already reported the RSI bullish divergence and a rare three-candle "Morning Star" reversal pattern for WTI that was formed at the lows earlier this week – for details click HERE. Now, WTI has formed further bullish indications. As can be seen from the daily chart, below, it has created a large bullish engulfing candle, which further confirms the change from selling to buying pressure. The US oil contract was testing a key technical level around $31.45/50 area at the time of this writing. This is where the short-term 61.8% Fibonacci retracement level of the most recent drop converges with a medium-term bearish trend lines (from point D on the chart). Given the sheer number of bullish indications, a breakout looks very likely now. However as the long-term trend is still bearish, there is also a good possibility for a failure here. Speculators may therefore wait for the break to happen before taking a short-term view on oil. In any event, the possibility of a "false break" is also there, so risk management (stop loss) should not be forgotten. 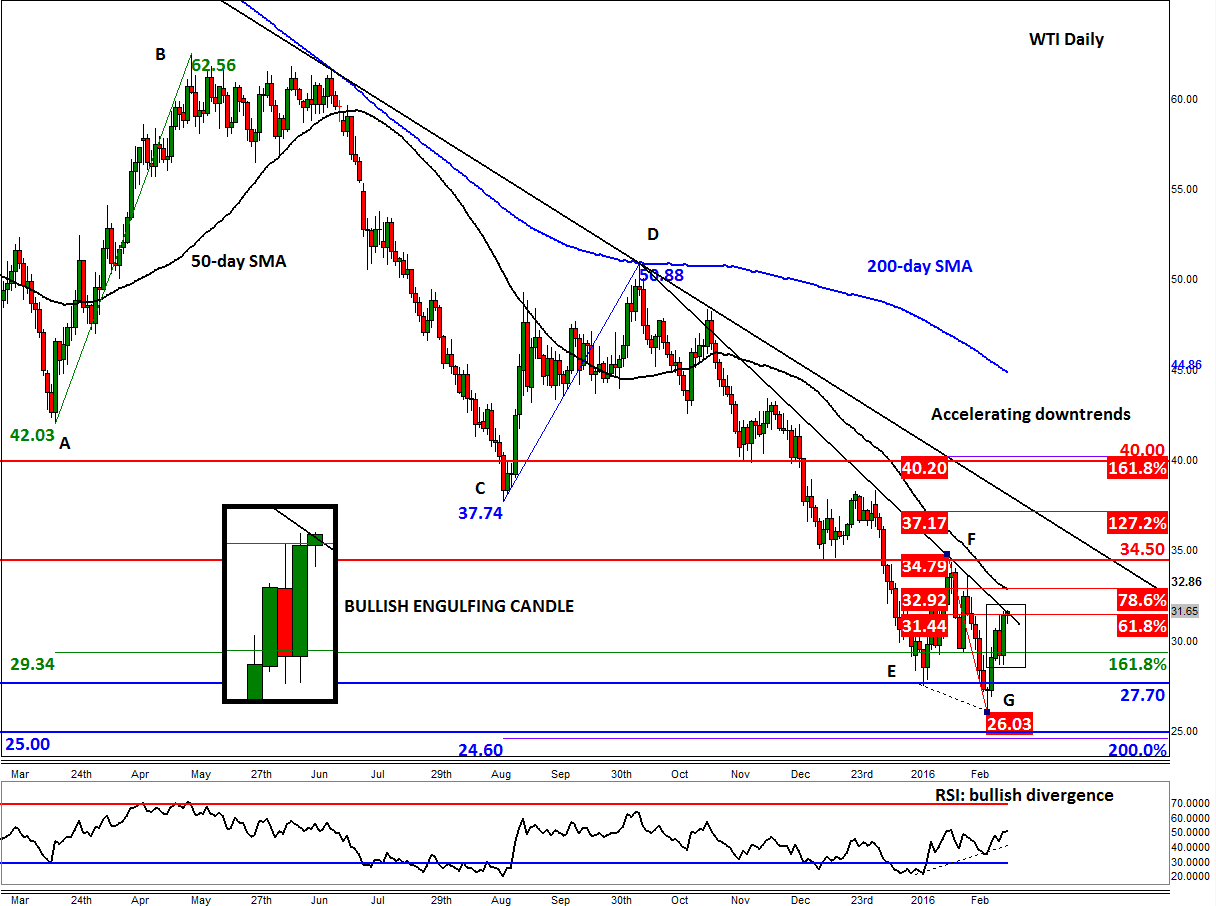 Likewise, the daily chart of Brent is looking bullish, at least as far as the near-term outlook is concerned. The London-based oil contract has held its own above the $30 handle following its most recent sell-off phase. It has therefore created a "higher low." Brent has also broken above the next resistance of $32.25 with ease and now it needs a "higher high" above the $36.00 handle. If seen, a rally towards, if not beyond, $40.00, the top of its bearish channel, could be on. Still, the longer-term technical outlook continues to remain bearish while Brent is contained inside the bearish channel. Meanwhile failure to break decisively above $36.00 would be a short-term bearish development; below $30 and all bets are off. 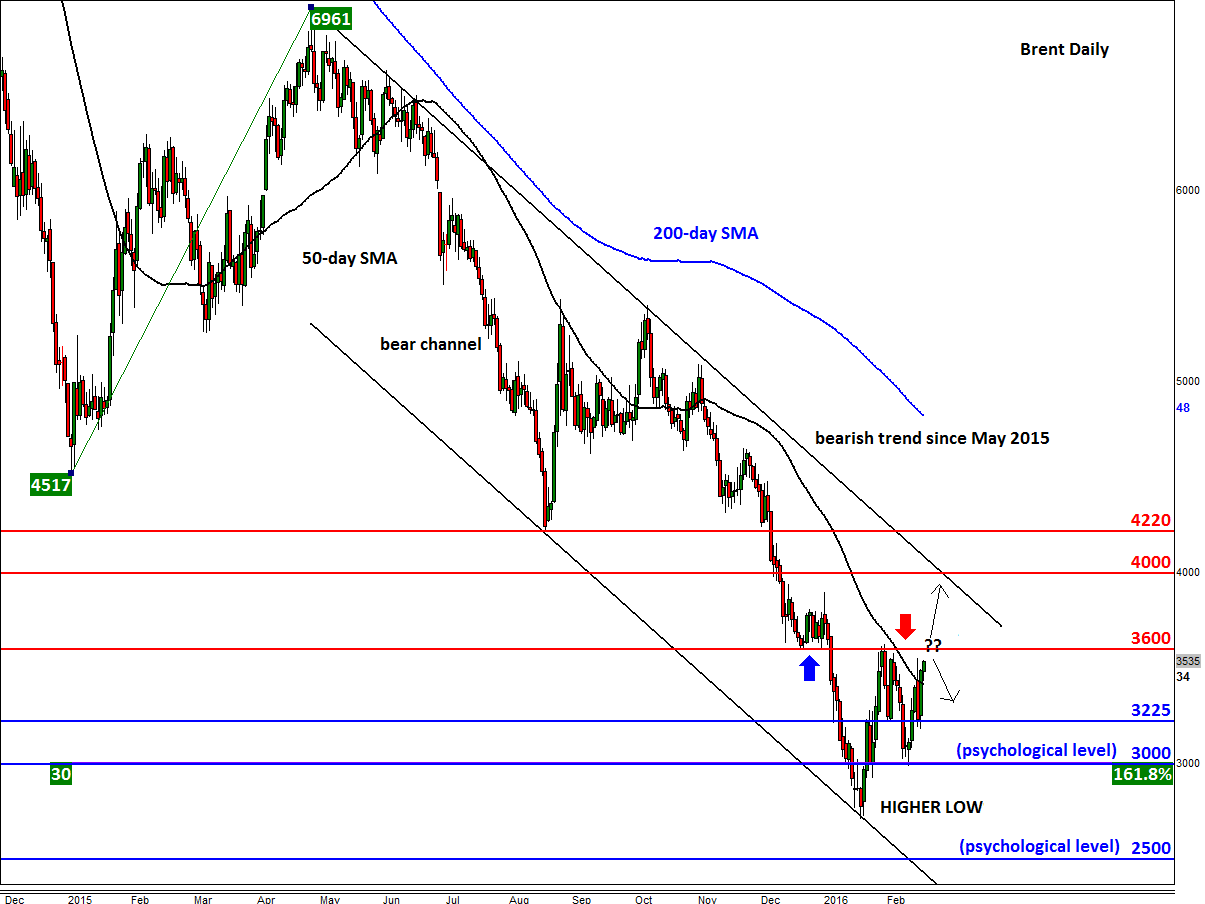