DAX: Things go from bad to worse for European stocks

September is here. Already-elevated volatility is about to go up a notch or two as traders and investors return from summer holidays. Unfortunately, more pain is likely for investors as Europe’s energy crunch gets worse. We could see a fresh lows for the year for the likes of the German DAX ahead of next week’s ECB meeting after August turned out to be yet another bad month for risk assets.

The major global indices fell sharply last month. In Europe, the Europe Stoxx 50 index dropped about 6% on the month, while the DAX shed 5.4% and FTSE was 2.4% worse off. In the US, The S&P 500 and Dow Jones lost more than 4% while the Russell slipped 2.4% on the month. Bond prices fell further, and yields rose sharply as central banks turned more hawkish while more evidence emerged of a slowing global economy. The US dollar tacked on another 2.7% and this saw gold fall 3% in August, with the metal extending its losing run to 5 months. A break below $1700 looks very likely.

Investor bets over more aggressive rate hikes and hawkish central bank commentary is likely to keep US dollar and bond yields underpinned, and zero- and low-yielding assets undermined for a while yet. In August we saw the Fed turned even more aggressive in its hawkish tone as it tries to tame inflation with big rate hikes. Bets that the Fed would deliver a hattrick of rate increases in September rose sharply after the Fed Chair Jerome Powell spoke at the Jackson Hole Symposium. Hawkish rhetoric from the ECB has also increased as Europe struggles with an energy crunch and record inflation. In August, Eurozone inflation hit a record 9.1% and Germany saw its inflation rise to its highest level in more than 40 years. Several ECB policymakers have called for the central bank to up the pace of its rate increases from an initial 50 basis point rise in July to a three-quarter point increase at next week’s meeting.

Adding further fuel to the fire have been concerns over the health of the Chinese economy. The latest sign of weakness at the world’s second largest economy was evidenced by the manufacturing PMI data showing an unexpected contraction in August as the nation’s zero-COVID policy and energy issues hit the sector.

With China being one of the major export destination for many of Germany’s manufacturers, the DAX index will struggle to find much love in the current market environment. The German index has broken several support levels and now look poised to take out this year’s earlier lows of 12431 (March) and 12385 (July). There are likely to be a cluster of sell stops resting below these levels from trapped longs. Thus, I am expecting to see a sharp move lower, possibly as early as later on today. 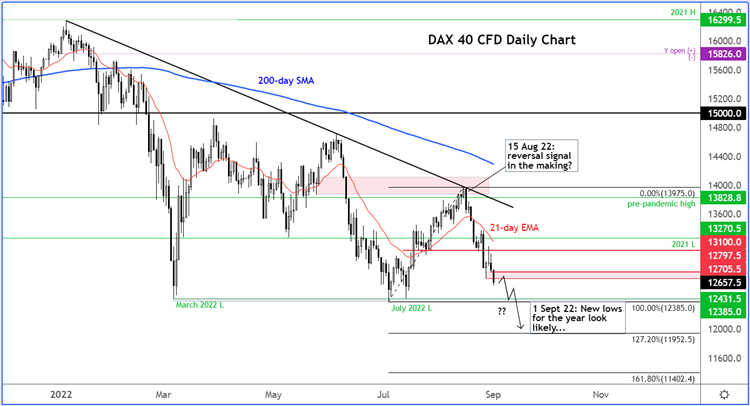