DAX: Was that it for stock market recovery?

European stocks gave back a big chunk of the gains made the day before, when everything rallied on the back of speculation the Fed might ease off the rate hikes. US futures tracked Europe lower, with gold and especially silver also dropping sharply, with the dollar and yields making a comeback. The release of some disappointing European data and this week’s big rebound in oil prices has also renewed worries about the energy crunch and a long cold winter for Europe.

With the OPEC+ likely to cut production sharply and may do so more in the future, this serves as reminder for the Biden administration that the release of oil from the SPR will only have limited impact on oil prices and energy inflation, meaning the Fed might have to keep cutting aggressively for longer. This equals bad news for stocks.

Meanwhile, today’s German trade figures and the Eurozone PMIs have confirmed recession worries and the euro has correspondingly fallen, along with the DAX and other European stock indices.

After Monday’s final PMIs confirmed the Eurozone manufacturing sector was deeper in contraction than initially estimated, today saw the final services PMIs also reveal a similar picture. The final services PMI for Eurozone PMI was 48.8 instead of 48.9, thanks to Spanish flash PMI falling below 50 to 48.5 and Germany being revised down to 45.0 from 45.5.

In addition, the latest trade figures from Germany point to a gloomy picture, as exports to other EU countries contracted in another sign of a weakening European economy.

Today’s weakness comes after what had otherwise been a rather positive start to the new week and quarter for stocks and other risk assets. Risk assets rallied at the start of Q4 after weaker US manufacturing and employment data gave rise to speculation that the Fed may begin to pull back on a recent series of interest rate hikes sooner than expected. In addition, we have seen the likes of Bank of England, Bank of Japan and People's Bank of China all intervening in some way shape or form, while the Reserve Bank of Australia opted for a smaller-than-expected hike.

But as Eurozone concerns are revived, the major European indices like the DAX is now in danger of starting a new downward trend and that motion may have started today: 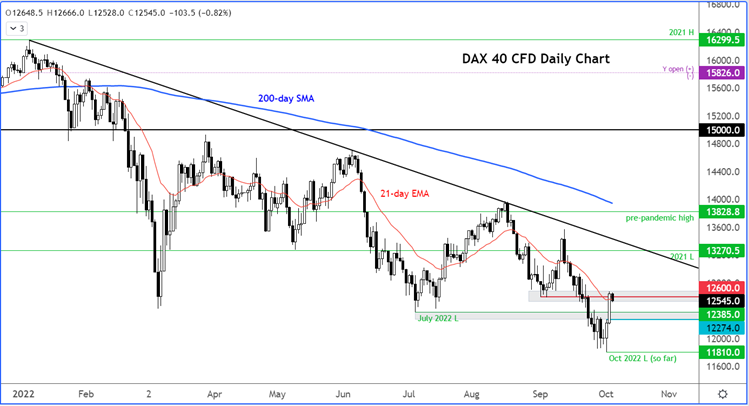 The DAX has hit resistance at around 12600 and it has reacted. The next downside target is the recaptured summer low of 12385, below which there is nothing significant until the base of Tuesday’s breakout at 12274. And if the latter breaks, then it is game over for the bulls, as a revisit of this month’s low would then become a strong possibility.