Any time markets are volatile, traders look to perceived "leaders" to tell them everything is going to be alright (see the popularity of CNBC’s recent "Markets in Turmoil" specials), and today’s missionary du jour took on that mantle willingly.

As widely expected, the European Central Bank did not make any actual changes to its monetary policy, but ECB President Mario Draghi’s subsequent press conference went as far as possible to reassure traders that the central bank was ready to act. Some of the important headlines from the still ongoing press conference can be seen below [emphasis mine]:

In case you’re unfamiliar with translating the obscure language of central-bank-speak, this is an unambiguously dovish statement. President Draghi is known for using his ECB press conferences to set the expectations for monetary policy changes in advance (hence the disappointment with December’s half-hearted measures, at least relative to the high bar that he had previously set), and based on today’s comments, Draghi and company are setting the stage for more easing in March.

The nod to the potential for interest rates to go "lower," repeated comments about "downside risks" increasing, and most importantly, the explicit comment that the central bank would "reconsider" its monetary policy stance in March all support the dovish view. In a direct parallel to Q4 of last year, today’s press conference will set the market’s expectation for additional easing (perhaps for an  expansion, not just an extension of the ECB’s QE program) when the central bank meets in March.

Not surprisingly, the euro has taken it on the chin in the wake of Draghi’s comments. EUR/USD has shed over 125 pips from above 1.09 to below key support at 1.0800 as of writing. Meanwhile, the big rally in EUR/GBP is finally showing signs of petering out.

One week ago, we noted that "if EUR/GBP GBP rallies to close above Monday’s high at .7555, it would tilt the odds in favor of more strength, potentially up toward the 38.2% Fibonacci retracement of the entire 2013-15 drop near .7650, if not higher." As it turns out, even that ostensibly aggressive bullish target was too conservative as the pair rallied all the way to a high of .7750 in less than six days.

Now though, EUR/GBP is trading back below the big 38.2% Fibonacci retracement, off more than 100 pips from yesterday’s high. With the RSI indicator now rolling over from overbought territory, a deeper pullback seems likely, and a move back down to the big previous-resistance-turned-support area at .7490 would not be surprise. Now that Draghi has popped the bulls’ balloons, only a move back above .7750 would shift the immediate-term bias back in favor of the buyers. 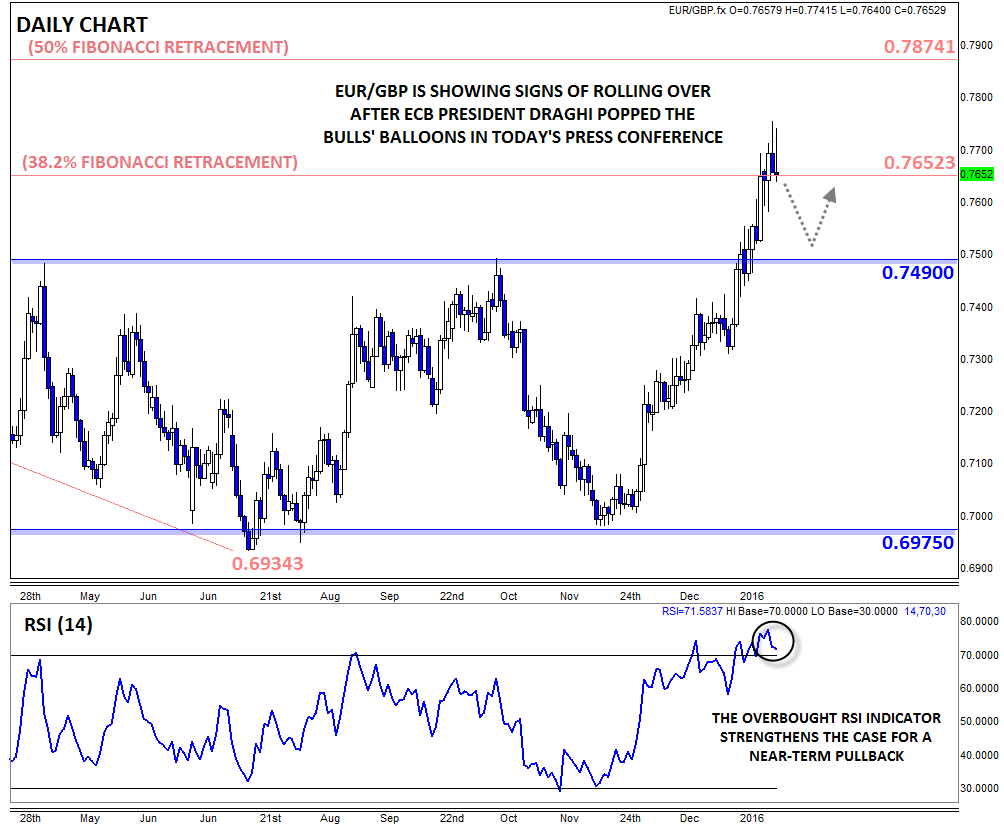