…except Spain where the IBEX is among the weakest-performing European indices – is this telling us something?

It has been a lacklustre first half of the day in Europe, where the major indices have drifted from their earlier highs, awaiting direction from Wall Street. Investors appear reluctant to keep bidding the markets higher after a big rally last week, amid a still-gloomy outlook. The hesitation is not a surprise after what has been a very persistent bear trend this year, with rallies continuing to be faded. This time, there appears to be more momentum and optimism behind the upward move as some investors believe we are past peak inflation and that central banks are now on the path of easing interest rate hikes before pausing in early parts of 2023. While this has provided a big relief rally for stocks, that’s not to say we will kick on and head to new all-time highs from here. There’s still more policy tightening to come, and inflation remains too strong for investors to be complacent.

The latest news from Europe was mixed this morning, with the closely watched ZEW survey showing investor sentiment improving than the previous month, although it still remained rooted in the pessimistic territory. The improvement in sentiment is hardly surprising given the stock market rebound of late. But with growth remaining anaemic and inflation in double digits, it will take something remarkable to make investors feeling more optimistic about the outlook.

Indeed, the latest growth data revealed that the Eurozone economy expanded by just 0.2% in Q3, confirming the initial reading.

The European Commission thinks the EZ is heading into a recession, with output falling in Q4 and Q1 of next year. It is not going to surprise anyone with soaring inflation and the ongoing energy crisis continuing to erode purchasing power of households and businesses alike. The situation is made worse by rising interest rates, making it more costly for households and businesses to borrow.

A growing number of major indices have either surpassed or neared their respective 200-day moving average. The Spanish IBEX is the latest to do so. So far, most indices have shown willingness to remain supported on the dips, increasingly eroding the bearish control. But due to the macro factors mentioned, there is a big risk that we might experience a rug pull one of these days. It is therefore imperative that traders respect any short-term bearish price action that might appear in the coming days. The Ibex has been among the day’s weakest of indices, as it has struggled to around its 200-day average over the past few days, holding below resistance at 8180ish.

We will only turn tactically bearish if we get a confirmed reversal signal. A move below the breakout candle from Thursday at 7976 would certainly make the bear case stronger. For now, the Ibex is finely balanced as it is still managing to hold above prior resistance circa 8065-8080. 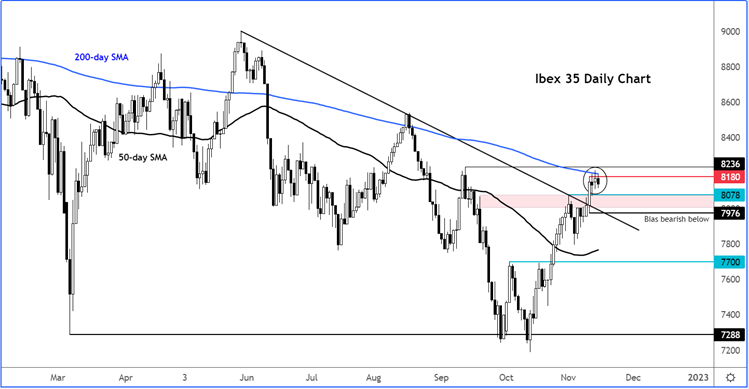