Trading ranges were relatively tight overnight, considering the mid-term results were being released. I do not remember that being the case in 2018, when Democrats took the seats back from Republicans with Trump at the helm. However, the final results are yet to arrive and it could still prompt some volatility, depending on which way they swing.

The US dollar is likely to come under further pressure if Republicans win the house and the Senate, as traders assume it will make it harder (if not impossible) for the Biden administration to roll out yet more inflationary packages. If the Republicans take the House but Dems retain the Senate, I suspect it could even see the US dollar strengthen as they will get the last say in any bills voted in ‘da house’. But we also need to factor in that markets have begun pricing in a Republican victory, and those bets could come unwound it’s not the case. And with that, we’ll take a look at the euro.

The dynamics behind the euro have been changing in recent times, with large speculators increasingly net-long euro futures and traders (on aggregate) culling a significant proportion of net-long exposure to the US dollar.  1-month and 1-week put demand for the euro (downside protection) hit lows in late September and have reduce by at least a half as investors became less concerned with the euro’s demise. Yet EUR/USD has only managed to rise around 5% since the September low, which is a drop in the ocean compared with its established downtrend. Put together, a case could be built that the euro has further to rise and the dollar has further to fall. 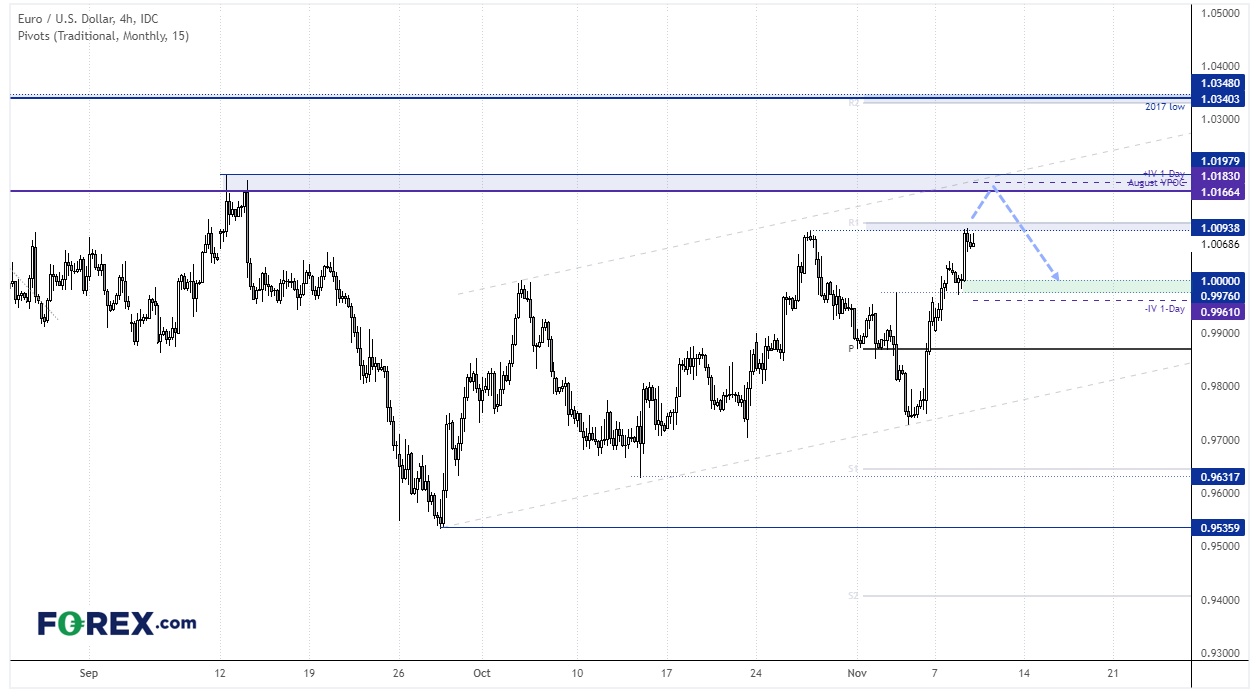 EUR/USD is trading within a rising channel on the 4-hour chart and has already achieved a decent rally from the channel’s low ahead of the mid-terms in anticipation of a Republican win. The rally has stalled around the monthly R1 pivot point and prior cycle high, but also sows the potential to push higher once more.

However, take note of a cluster of resistance around 1.0170 which includes the September 13th high, upper implied volatility range and the August VPOC (the most amount of trades took place in August in this area – which can act like a magnet and provide resistance).

And with the US dollar index holding above a key trendline, I’m on guard for a minor new high on EUR/USD before a prominent swing high and move lower. In which case, parity makes a potential area for bears to focus on.