FTSE not out of woods despite UK’s tax U-turn

UK assets will remain firmly in focus as we start the new week and final quarter of the year. The FTSE bounced off its lows this morning and the pound rallied – although it then drifted lower from the highs – after the UK government’s embarrassing U-turn on the abolition of the tax for the highest earners. With the Bank of England’s temporary bond buying while raising interest rates, and the government’s questionable policy choices amid soaring cost of living crisis in the UK, investor confidence towards UK assets will likely remain negative for the foreseeable future. I expect the pound recovery to falter and don’t see how the FTSE will escape getting caught in the global stock market turmoil.

Less than a month at Number 10, the pressure keeps on piling for Liz Truss. Just a day after the new UK Prime had insisted she would not abandon the planned tax cuts for the highest earners, today Chancellor Kwasi Kwarteng has said that he and the PM "were in agreement that we wouldn't proceed with the abolition of the rate." The situation is a humiliating one for the PM, as she tries to fend off growing rebellion within her own Conservative Party. After last week’s dramatic fallout in the financial markets, there’s growing uncertainty about whether Truss and Kwarteng can hold onto their new roles. More worrying for the Tories as a political party, they have plummeted in the polls, with the popular YouGov survey putting them a record 33 points behind Keir Starmer’s Labour Party on Thursday.

Meanwhile, the BoE is pressing the brake and accelerator at the time, which is going to break something. The central bank had to react as UK’s financial stability was at risk. It has promised to purchase long dated government bonds at an “urgent pace” and on “whatever scale,” to help bring down borrowing costs. Yet, the fact that it is also forced to hike interest rates at the same time because of soaring inflation and the big tumble in pound (which is also inflationary), it just doesn’t feel like this might be the right time for investors to put what little spare cash they might have to work in the markets.

Thus, I don’t expect the FTSE to start trending higher any time soon. If we do see small bounces, traders must be careful not to chase carelessly as the markets can be very punishing when in a bear trend. Today’s bounce off the lows is at risk of running out of steam as the index now tests the first line of defence and short-term resistance level around 6860.  As things stand, I expect to see a drop below the March low of 6762 this week. 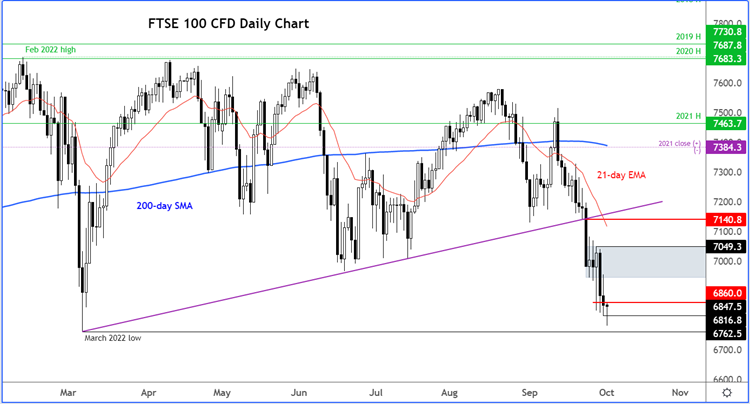