Fears of deflation caused by lockdowns in China have helped Gold continue its slide lower.  Over the course of the last few weeks, the lockdowns in Shanghai and potentially Beijing have led to poor manufacturing data while inflation remains low.  The NBS Manufacturing PMI for April was 47.4 vs 48 expected at 49.5 last.  The Non-Manufacturing print was even worse at 41.9 vs 48 expected at 48.4 in March.  Both prints are well below the 50 level, which is considered contractionary territory.  China March inflation rate for March was only 1.5% YoY.

Gold (XAU/USD) has been moving aggressively lower since forming a shooting start on April 18th as fears spread that the lockdowns in Shanghai could be extended to Beijing.  Gold put in a high of 1998.35 just 2 weeks ago and, thus far, has traded down to today’s low at 1854.68.  Price today also broke through the 50% retracement level from the lows of August 9th, 2021 to the highs of March 8th.  A confluence of support sits just below.  This level consists of the following: 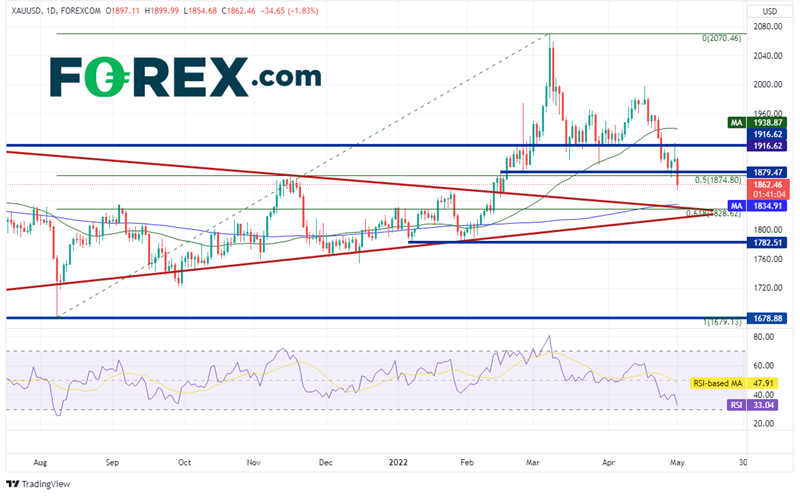 However, notice that the RSI on the 240-minute timeframe is diverging with price, an indication that Gold may be ready for a bounce.  First resistance is at today’s high near 1914.68.  Above there is horizontal resistance from April 21st at 1937.93 then a downward sloping trendline dating to March 8th near 1974.50. 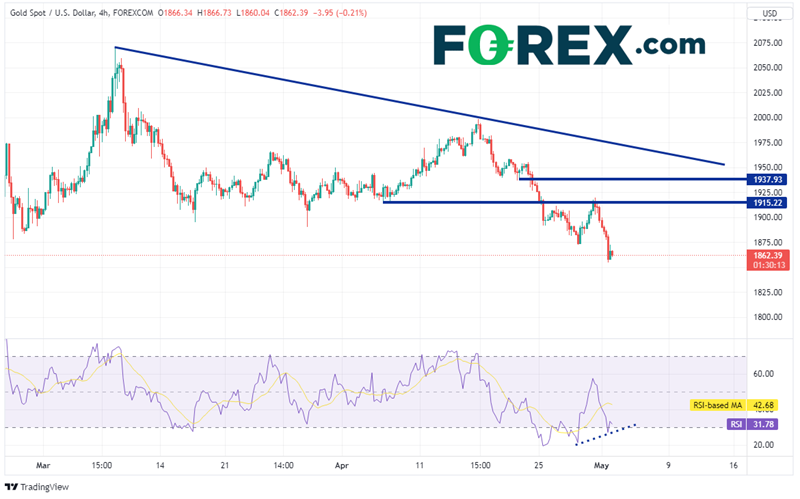 Gold has been moving lower since March 8th; however, the selloff has picked up strength recently on fears of deflation due to lockdowns in China.  The PMI data doesn’t give much hope that prices will rise anytime soon. Is Gold ready to bounce?  The shorter-term timeframe RSI looks to be oversold; therefore a near-term bounce is possible.  However, until confidence returns that prices from China will move higher, Gold may begin trading in a range.