Gold has fallen below $1700 for the first time since August, and has continued lower today. We’re likely seeing a secondary reaction to the fact that gold fell below $1700 – a key level some had assumed would hold longer than it did.

It’s difficult to see how much support safe-haven flows have provided gold in context of its strong downtrend of late. But we could assume that gold could be trading lower, were it not for geopolitical tension brewing in the background. 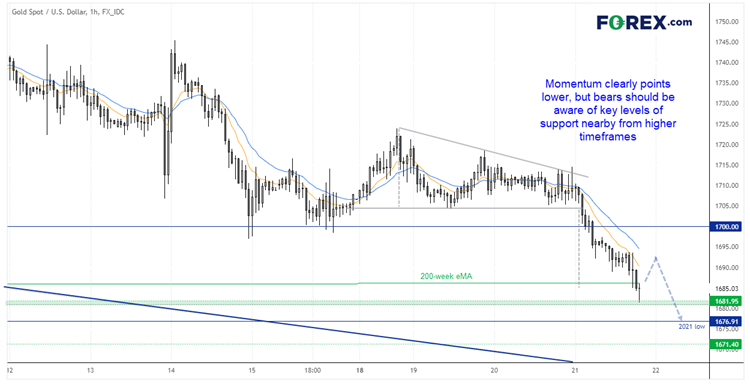 We can see on the daily chart it broke out of an descending triangle and reached target overnight, and has since broken blow its 200-weel eMA. Being such a long-term level we can expect some volatility around it, but such levels do no usually break so easily. Still, the 10 and 20-bar eMA’s are capping as resistance and bears seem likely to fade into rallies.

We have several trading days left this month, yet gold has already fallen -6.5% in July which currently its worst month in 13. A stronger US dollar and aggressive hikes from central bank certainly taken their toll on the yellow metal. Assuming it finishes the month lower – which appears likely – it will be the fifth month this year to do so, which would be the worst start to the year since 2013.

Looking at it from that metric, I’m in no rush to call a low on this market. However, prices are approaching a technical juncture around 1687 which could prompt some volatility around it as we head into August. The monthly chart is trading just below the 2018 trendline, and just above the 2021 (pandemic) lows. Note that they also coincide with the 38.2% Fibonacci ratio between the 2022 high and 2016 low. So which side July closes on could dictate the sentiment for August, and be the difference between a admirable bounce of continued selloff.

But I’d wager a bet there are large stops beneath those 2021 lows, and if they get triggered it could be time to buckle up, as $1600 is within easy reach for bears looking at current levels of volatility.

To see a material turnaround and subsequent gold rally, I suspect we need to see hard evidence that inflation has topped and that the phase of central bank tightening is over. And I don’t think we’re quite there yet.