China’s economy beat expectations and grew by 4.8% y/y in Q1 according to data by NBS (National Bureau of Statistics). Yet the news is bitter-sweet as leading indicators and lockdowns point to weaker growth in Q2. For example, both the services and manufacturing sectors are contracting according to NBS and Caixin PMI reports, and large-scale lockdowns means that earlier rounds of fiscal support (such as tax cuts and tax rebates) have not done enough to support the economy.

Earlier this week the PBOC (People’s Bank of China) unveiled measures aimed at helping people and companies affected by Covid, although initial feedback suggests the measures are quite small relative to the size of the problem. That said, today it was reported that the PBOC held a meeting with CBIRC (China Banking and Regulatory Commission) to discuss financial assistance for the real economy although details are yet to be announced. But with Beijing continuing to crackdown on industry sectors as part of the ‘common prosperity’ initiative, it has done little to help equities. We can see in the above table that 8 of the top 10 stocks in the China A50 remains near their 1-year lows.

China A50 set to break lower? 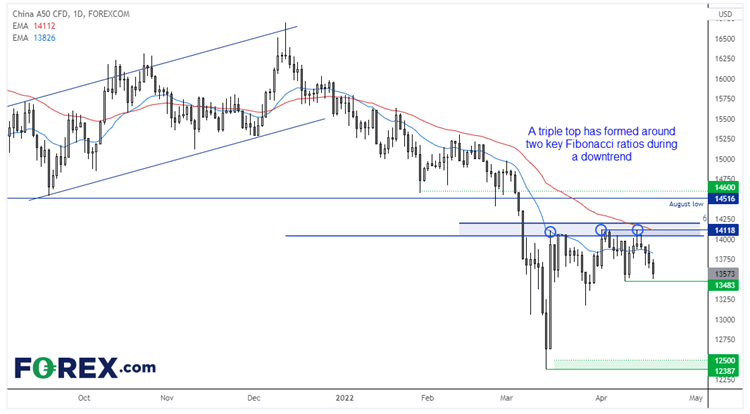 The underperformance of mega-cap stocks means we retain our bearish bias for the China A50 index. The index has been in a strong downtrend since the February 2021 high and its recent retracement has met resistance at two key Fibonacci ratios. The 50-day eMA has capped as resistance and a triple top has formed around the Fibonacci zone. Momentum has recently turned lower, so it is possible the corrective high was at 14,118. Form here we want to see a break (or daily close) below 13,480 to assume a resumption of its downtrend.

Is China ready to let their currency slide? 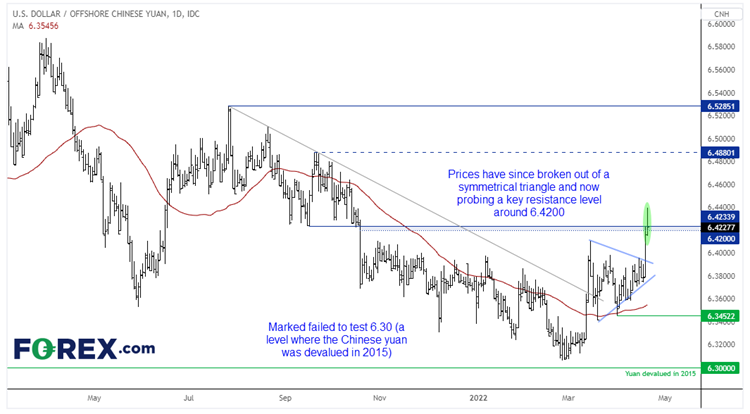 From a currency perspective it makes more sense for China to let their currency weaken. We made a case for a strong rally on USD/CNH and today we have seen prices break above 6.42 resistance, so this could be the early part of the multi-month rally we discussed in mid-March.

Notice how the market didn’t quite reach the 6.3000 level, which is when the yuan was devalued in 2015. We have since seen an initial burst higher followed by a period of consolidation, before prices broke out of a triangle pattern yesterday.